What Does Newsom Want? 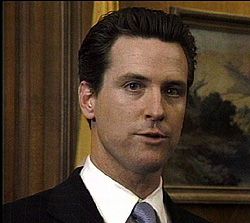 Following Tuesday’s election, Board President Aaron Peskin argued that the Mayor’s high popularity numbers make it “incumbent on him to address the huge budgetary crisis at Muni, ” to “act, not simply talk” about civil service reform, and to “have the courage” to lead the fight for important bonds and progressive tax measures.” In the view of Peskin and others, “leadership” means using one’s political capital to solve the tough issues facing San Francisco. Should Mayor Newsom risk lower poll numbers by taking on divisive but important issues? Or should he continue to push his agenda where openings exist, avoid high profile and divisive legislative and initiative fights, and likely maintain high approval ratings? ##M;{more]##

Supervisor Peskin’s post-election comments echo what many have been saying about Mayor Newsom’s 80% approval numbers: his approval is high because he avoids tough fights. The term “tough” refers not to politically controversial measures like Care not Cash, which had 60% support, was strongly supported by Newsom’s base, and which had no political downside for the then-Supervisor. Rather, it refers to issues like the tax measures on the November 2004 ballot that are harder to win, and which would require the Mayor to convince some of his supporters to vote against their perceived interests for the good of San Francisco.

Unfortunately, past history shows that politicians are more likely to lose than gain from taking on the “tough” issues urged upon them by political insiders and political science professors. That’s why so many important problems continue for years without resolution.

Consider the issue of the perceived need for a new 49ers stadium.

During the height of his popularity, Mayor Willie Brown used all of his political capital to secure endorsements from progressive groups, unions and individuals behind the combined stadium/mall project. This took some doing, as the notion of building a chain-infested mall in Bayview-Hunters Point struck most progressives as crazy.

But not wanting to appear afraid to take on this tough issue, Brown campaigned fulltime for the project, which narrowly prevailed in a controversial election (where ballots were found floating in the Bay, boxes of damp ballots mysteriously appeared in the Registrar’s office, and Housing Authority tenants were allowed “early voting” in violation of state law).

As a result of taking on this tough issue, Brown lost some progressive support for the balance of his mayoralty. The mayor saw progressives as betraying him by their opposition, and became even more beholden to the corporate and development interests that backed the initiative.

And Brown took this political hit for a stadium/mall that was never built.

All rhetoric aside, Mayor Newsom will not be spending political capital on a new 49ers stadium anytime soon.

Mayor Newsom is a great fan of the Clinton-Gore Administration, recruiting former staffers and studying its lessons well. Newsom knows that President Clinton took on one of the most intractable issues of all when he tried to reform America’s inadequate and costly health care system.

Was Clinton’s sacrifice of political capital for health care reform appreciated? Progressives opposed his plan while Republicans made historic political gains by defeating it. Clinton then spent his second term focusing on small issues and on seizing narrow openings for reform—he subsequently left office with approval ratings over 60% despite the Lewinsky affair.

Since taking office, Mayor Newsom has primarily followed the lessons of Clinton’s second term. He is always launching new “pilot programs” and has taken first steps toward implementing such programs as a local earned income tax credit, expanded health care, and boosting San Francisco as a hub for biotech.

In contrast, Newsom has failed to achieve systemic goals through ballot initiatives.

Two months after taking office, Newsom sponsored a “Workforce Housing Initiative” that lost at the polls by a 70%-30% margin. The Mayor then sponsored a housing bond, sales tax increase, and business tax on the November 2004 ballot, and lost all three amidst heavy criticism of his handling of the campaigns.

Is it any wonder that the Mayor did not push any tough issues on last week’s ballot?

The Mayor has announced that one of his top priorities for 2006 is the passage of a bond to rebuild San Francisco General Hospital. The proposed cost is at least $800 million, a politically untenable amount.

Confronted with this unavoidable tough issue, the Mayor will have to assess what is the highest amount that voters will approve. He will then have to go to Nancy Pelosi to see if she can secure federal funds for the difference. Even if the hospital bond is “only” $400-$500 million, the cost overrun on rebuilding Laguna Honda will make the campaign a difficult sell.

For those eager to see Newsom have to confront a tough issue, the SF General bond offers a good test.

The Mayor may also have no way to avoid assembling a coalition that can secure passage of a business tax increase next November. Having dramatically improved his standing with organized labor, the Mayor does not want to be fighting city workers during the next two budget cycles.

Yet unless San Francisco strikes oil while excavating Mission Bay, further cutbacks in next year’s federal budget makes a city budget shortfall inevitable. The Mayor’s strategy of raising fees and closing facilities can only go so far, and it will be harder to get Board approval for unpopular fee hikes during an election year.

Moreover, with San Francisco schools facing a potential strike this week, Newsom has to be looking for ways to raise additional school revenue. The Mayor could face a greater political downside by doing nothing to raise new tax revenue via initiative next November.

As for Muni’s budgetary problems and the political hot potato of “civil service reform,” the Mayor is likely to take no major action regarding either. He can buy time for a Muni fix by appointing a high-profile new MTA Director (the interim Stuart Sunshine does not fit the bill), and it may be hard to argue after Prop D’s big defeat voters are demanding new revenue strategies for Muni.

As for civil service reform, there is a reason every mayor complains about the system without changing it: it is a political loser. Opponents of reform can make a mayor’s life miserable, while those potentially benefiting from a fairer system are unorganized.

In today’s San Francisco, a major portion of the electorate, if not a clear majority, are so focused on the Bush Administration scandals, the war in Iraq, the Alito Supreme Court fight, and other national and state issues that they are not demanding sweeping action from the city’s local politicians. Given Mayor Newsom’s favoring of incremental reform over bold but politically difficult actions, the mayor is in step with the city’s mood.

Newsom could render all of the above discussion irrelevant by entering the Governor’s race. Frontrunner Phil Angelides played a very active role in the anti- Schwarzenegger campaign, and likely boosted his standing among organized labor.

It may be that unions and top Democrats feel that Schwarzenegger is so politically damaged that even Angelides is strong enough to win. But the anti-Arnold forces smell victory next November, and if they are not fully comfortable that Angelides is the guy to send Arnold packing, they will convince Newsom to enter the race.

If Newsom passes on the race and Angelides wins, the Democratic candidate for Governor is fixed until 2014. With competition from Los Angeles Mayor Villaraigosa, Assembly Speaker Nunez, and Congressmember Loretta Sanchez, Mayor Newsom could have approval ratings in San Francisco of 99% but would have less chance for higher office than he currently has.