What Democrats Need is a Little Backbone 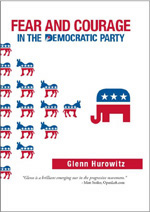 With Congress having failed to end the Iraq War, and the Senate debating a FISA bill to expand the President’s powers, it’s easy to conclude that the Democrats simply don’t care much about a progressive future. Glenn Hurowitz, who runs the Democratic Courage PAC, offers a different take in his new book, Fear and Courage in the Democratic Party. What Democrats need, he says, is a little courage. The Politics of Fear has cowed party leaders into believing that we are a conservative country – and that standing up for progressive values is a risky endeavor that could backfire. “It’s not that they’re intrinsically bad or cowardly,” he writes. “It’s that they remain slaves to a deeply flawed political strategy that says courage would ruin their political chance of success.” With five case studies, Hurowitz persuasively argues that standing up for what you believe in is not just the right thing to do – but also a winning politics. It’s a valuable lesson that Democrats should heed, as the first presidential primaries begin early next month.

Did you know that in 2004, 22% of voters who supported gay marriage voted for George Bush? It sounds crazy when you consider that the President was campaigning for a constitutional amendment – but Hurowitz uses this as one of many examples why a candidate’s stance on the issues does not primarily decide elections. Voters place a higher premium, he argues, on a candidate’s leadership and integrity. But meanwhile, the Politics of Fear — egged on by groups like the Democratic Leadership Council — tells Democrats to vacillate on the issues so as to not turn off swing voters. Therefore, progressives have let the right-wing set the terms of debate – while avoiding fights that would mobilize their base.

But as the late Minnesota Senator Paul Wellstone was fond of saying, “sometimes you have to start a fight to win one.” Hurowitz devotes a whole chapter to Wellstone, a courageous politician who stood on principle and made his progressive politics a winning politics – even when he took positions that his constituents disagreed with. Wellstone won in 1996 after being the only Senator up for re-election to vote against Welfare Repeal, and would likely have won again in 2002 after opposing the Iraq War Resolution. In both cases, his public approval ratings went up because voters said that at least they knew where he stood.

One key to Wellstone’s success was that he put his position as a U.S. Senator within the overall context of a progressive movement. Wellstone plugged constituents who called his office with state and national advocacy groups, helping to organize a base that would be there for him when the right wing attacked. “Wellstone brought a laser-like focus to building a political movement,” said Hurowitz, “because on that work hung not only his personal success or failure, but the success or failure of his vision for a better world.” As someone who knew Paul Wellstone, I was very impressed with Hurowitz’s research – there’s a lot in the chapter about Wellstone’s legacy in the Senate that I wasn’t aware of.

Failing to actively engage citizens to push your politics – coupled with a paralyzing fear of confrontation – explains why President Bill Clinton left behind no progressive legacy. In the longest chapter of his book, Hurowitz takes us through the eight years of the Clinton Administration – showing how he repeatedly capitulated to Republican attacks, only to further embolden the opposition and leave the Democratic base demoralized and dispirited. Ironically, Clinton’s significant surges in popularity only happened when he stuck to his guns: in 1995, when the Republicans shut down the federal government, and in 1998, when he fought back impeachment efforts.

Hurowitz goes into more wonkish detail about the 1993 budget fight, the 1994 health care debacle, the 1995 Gingrich Revolution, the 1996 Welfare Repeal and other Clinton capitulations than most readers would care to know – and he probably should have cut some out. But he gets his point across adequately enough: Bill Clinton was a masterful politician who believed that the key to success was finding common ground with your enemies, no matter how much they hate you. Because he did not organize his base, or confront his opponents, Bill Clinton left office without a legacy like FDR (Social Security) or Lyndon Johnson (Medicare) that would have nurtured a progressive future.

Others have criticized how progressive leaders did not hold Bill Clinton accountable in the 1990’s as he betrayed the Democratic left, because they enjoyed their access to power and did not want to get blamed for emboldening Republicans. Which is why the best chapter in Hurowitz’s book does not profile a courageous or fearful Democrat – but an advocacy group, MoveOn, which has been remarkably effective in the last ten years.

“The secret of MoveOn’s success,” said Hurowitz, “was not courageous leadership – but courageous followership.” Started in 1998 by two software engineers upset at the Clinton impeachment, the online group is effective because it engages its grass-roots members to collectively make the group’s decisions. Unlike other interest groups, it does not hire a lobbyist to advocate for them – and get stuck making compromises out of some dubious fear that they might help Democrats lose. “It’s impossible to threaten a crowd with the loss of inside access,” said Hurowitz, “when that crowd doesn’t have inside access.”

One chapter that I felt was lacking was Hurowitz’s profile of Tom Daschle – the former Senate Democratic leader who ultimately lost re-election in 2004 due to his cowardice. Daschle, said Hurowitz, faced the dilemma of representing a conservative state like South Dakota – while being expected to lead the Democratic opposition against George Bush’s initiatives. And for someone like Daschle, it was a struggle that proved far too difficult.

But while Hurowitz persuasively argues that Daschle was weak and ineffectual, I was troubled by his implication. Are red state Democrats doomed never to become party leaders, for fear of alienating their own constituents? Hurowitz probably would not agree with that conclusion, but he leaves little examples otherwise – although he offers faint praise for Daschle’s successor, Harry Reid of Nevada. Missing in his analysis was any comparison between Daschle and other red state Democrats who may have displayed courage – especially as 2006 elected people like Jon Tester and Jim Webb.

Hurowitz’s final chapter is about the newly elected Democratic Congress – who began with a strong show of “courage,” but have since retreated to a regrettable amount of cowardice. As the new Congress voted to get us out of Iraq, George Bush predictably refused to go along – and the Republicans in Congress have not moved an inch towards ending the quagmire. But rather than fight back, Democrats were afraid of appearing weak. So they “began grasping desperately for any legislation to pass, even if it came not from their list of priorities but from a President whom the American people had so clearly repudiated in the 2006 elections.” Ironically, this has made them appear even weaker – and has alienated their base.

In fact, a point that Hurowitz made in passing – which I thought was the most compelling part of the book – was his advice that Democrats should be willing to scare the American public. Republicans have used fear as a tactic to win elections, and convince voters to oppose their own self-interest. Fear is effective, because if you can scare people enough you create an obvious power dynamic – and Democrats should be willing to use that tool to get voters on their side. As I read his book, one of the overriding feelings I got was how effective fear has been to shut up progressives – and it’s about time that Democrats began using that tactic to our own advantage.

In less than three weeks, Iowa and New Hampshire voters will cast the first ballots for the Democratic presidential nomination. Whoever wins that race will go on to face the entire right-wing noise machine in the general election – as well as in the next 4 years if elected. Republicans will not let their guard down, and we should expect as vicious an assault as we saw when Clinton first became President. Progressives must prepare to deal with a Democratic Party that has been so cowed down by the Politics of Fear that they have stymied and betrayed the progressive agenda. With Fear and Courage, Hurowitz offers a compelling case for a new politics that will help progressives realize their goals.

EDITOR’S NOTE: Fear and Courage in the Democratic Party can be purchased online at Amazon. The Democratic Courage PAC is currently raising funds online to run a TV commercial in Iowa that criticizes Hillary Clinton. Send feedback to paul@beyondchron.org