What Democratic Vote Means for May Special Election 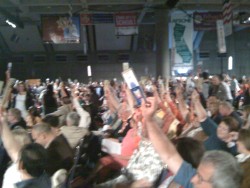 The California Democratic Party “split the baby” on the six propositions for the May 19th ballot – endorsing Propositions 1B, 1C and 1F, while not supporting Props 1A, 1D and 1E. This shifts the dynamic for the last three weeks. No longer can Prop 1A’s defeat be a mandate against tax increases – because the measure’s “spending cap” is why progressives oppose it. Likewise, “no” on Props 1D and 1E is now a vote for the state to fund children’s health programs and mental health services. And while many liberals fear the short-term “budget gap” if the measures all go down, the Party endorsed a “yes” vote on Prop 1C – which would have the most immediate impact. The Party’s support for Prop 1B is a mandate for public schools – and while Prop 1A’s defeat would prevent 1B from going into effect, a “yes” vote could pressure Governor Schwarzenegger to stop gutting education money. Democrats in the legislature promoted all six measures as a “budget package” to avert fiscal disaster. But it was a rotten deal, and the strategy would leave us no better off on May 20th towards a long-term solution. With this new dynamic, we can build momentum for scrapping the “two-thirds rule” in the state budget.

This weekend’s State Convention showcased the disconnect between the Party grassroots and the Sacramento leadership. Our legislators cut a deal with Schwarzenegger they honestly believed was the right thing to do, but the rank-and-file was angry at sacrificing core fiscal values just to kick the can down the road. California’s budget woes are structural, and until the state passes major reform the right-wing Republicans will keep holding a gun to our heads. Getting rid of the two-thirds rule – as soon as possible – is the only acceptable “budget reform” for the ballot.

At the Young Democrats’ caucus on Friday night, various legislators urged us to support these flawed measures – because there would be dire consequences if they failed. As a friend said to me while we listened to each politician, “Q: How do you get young people to disagree with you? A: Tell them they have no choice.” That summed up the sentiment of many delegates, who felt pressured to back something they had no power in crafting.

Some of the arguments we heard in favor of Proposition 1A were: (a) our right-wing foes at the Howard Jarvis Taxpayer’s Association oppose it, and (b) if it fails, it will send a message that the public opposes tax increases. Of course, the latter is only true if the sole opposition is right-wing zealots and the Republican Party. Prop 1A is a lot more than just extending a few temporary tax increases. It gives the state – which already has layers of fiscal straitjackets on the revenue side – another fiscal straitjacket on the spending side.

After the Democratic Convention vote on Sunday, press coverage on Prop 1A started to change. The Los Angeles Times called it a “state spending cap,” while the San Francisco Chronicle said it was a “proposed spending cap and rainy-day fund.” Before progressives began to oppose Prop 1A, the media only focused on tax increases – even though these temporary measures will stay on the books for two years if Prop 1A fails. That’s because the only ones complaining about 1A were Republicans like Steve Poizner and Meg Whitman, and the “tea party” crowd.

Rather than allow right-wing zealots to “own” the opposition, liberals began to articulate a fiscal agenda to drive the post-May 19th debate. If our ultimate goal is to scrap the “two-thirds rule,” it is smart politics to influence what happens when the Governor and legislature go back to the drawing board. Because the state will have an $8 billion deficit even if all measures pass, making the progressive case against 1A is a sound strategy.

Going back to the drawing board will mean choosing what budget priorities need to be fought for. If the Democratic Party had endorsed Propositions 1D and 1E, it would have sent the message that children and the mentally ill are expendable. And the combined “savings” from diverting these funds to help balance the budget is less than one billion dollars – or about 1% of the entire budget. Non-profits who directly work with these constituencies have campaigned against the measures. Defeating them will be a mandate to protect progressive fiscal priorities.

Nevertheless, liberals are anxious and fearful about the next round of painful budget cuts. It’s understandable that many delegates at the Convention held up placards to endorse the measures while holding their noses. Which is why the Democrats endorsed Proposition 1C, the measure that borrows up to $5 billion against future lottery revenues to balance this year’s budget. Of all six measures on the May 19th ballot, Prop 1C has the biggest short-term downside if it fails.

Robert Cruickshank wrote a solid piece yesterday on Calitics, advising Democratic leaders to dump the “yes on everything” strategy – and focus on Prop 1C. “Aside from the flawed nature of the proposals and how they came onto the ballot,” he wrote, “selling them as a single package was a disastrous move. If they want to salvage anything from this sinking ship, they could tell Californians why take a chance on borrowing against the lottery via Prop 1C, and how it will help our Democratic leaders more strongly resist Republican demands for massive cuts, instead of assume those cuts are a foregone conclusion.”

The Democratic Party endorsed Proposition 1B, which would give the public schools $9.3 billion of money that already belongs to them. But because it would only take effect if the voters approve Prop 1A, legislators have dismissed progressive groups who are “No on 1A” and “Yes on 1B” for being inconsistent. However, it has become popular for liberals to “hedge their bets” in case the voters pass Prop 1A. If the state is going to have a spending cap, it makes sense to secure a slice of the money for schools.

On the other hand, advocates have an alternative to Prop 1B – which is to go to court to enforce the Constitutional requirement of education funding. But if voters pass 1B while defeating 1A, it could strengthen the hand of Democrats who negotiate with Arnold and the Republicans – because the voters have affirmed public schools.

At the Democratic Convention, newly elected Chairman John Burton urged delegates who disagree on the propositions not to let these divisions keep us apart. The state will be in bad fiscal shape regardless of what happens on May 19th, and progressives must keep their focus on eliminating the “two-thirds rule.” This weekend’s split decision on the various budget measures can help forge a path towards a sane fiscal policy.

EDITOR’S NOTE: Paul Hogarth was a delegate at the California Democratic Party’s convention, and gave one of the floor speeches against Proposition 1E.