What Can Be Done About San Francisco Rents? 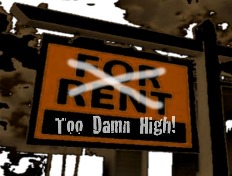 Rents on vacant apartments are skyrocketing in San Francisco, with the price of one and two bedroom apartments increasing roughly 30% —ten times the rate of inflation—in the past two years. Many blame the influx of tech jobs, though rents rose steeply before the tech boom and these jobs have reduced city unemployment and brought millions of dollars in public revenue. Criticizing tech may be cathartic, but it is not a policy solution.

The real bogeyman for San Francisco’s rental explosion is state laws preempting the city’s ability to maintain affordable housing. Yet there has been little effort to change these laws (highlighted by the Costa-Hawkins Act prohibiting rent controls on vacant units and the Ellis Act preempting just cause eviction). Both are causing similar problems in Los Angeles, Oakland, San Diego and other major Democratic cities, yet there is no concerted effort by elected officials and key stakeholders to enact revised state legislation. SF’s local options are limited, but the city could start enforcing zoning laws prohibiting the conversion of apartments to tourist use; this illegal practices has alone removed 500-1000 units from the rental market. Here are some other local actions that could impact skyrocketing rents.

The notion that tech workers are driving skyrocketing rents in San Francisco is an easy story to write and photograph, but it offers nothing in the way of solutions. San Francisco cannot control tech growth outside its boundaries, and many of the new tech jobs in the city—particularly in Mid-Market—are located in existing buildings. There has been little opposition to new tech office buildings at Mission Bay, and the argument that San Francisco should oppose businesses creating well-paid jobs—whether in tech, medicine, law or financial services—has little public support.

Meanwhile, the most obvious strategy for addressing SF’s rent crisis—changing state laws—is not even on the table.

When the state legislature preempted local just cause eviction laws (the Ellis Act) and local restrictions on increasing rents on vacant apartments, as well as any rent controls on condos or single family homes (Costa-Hawkins), the usual reasons for state preemption did not apply. These laws had nothing to do with the need for state uniformity on rental housing policies, and everything to do with the real estate industry’s ability to maximize profits at tenants’ expense.

So the real question is: why do laws responsible for growing income inequality persist without challenge in a state whose legislature and governor are all Democrats?

One answer is that the large Democratic legislative majorities actually hurts tenants because it brings more Democrats from swing districts who oppose tenant protections. The days when a pro-tenant legislative leader could readily get a majority of Democrats on their side are over; even getting an inclusionary housing bill passed this year was a struggle.

But what if the mayors and Board of Supervisors/City Councils of San Francisco, Oakland, San Jose, San Diego, and Los Angeles all came together to back a bill regaining local power over cities’ rental housing stock? These cities comprise a majority or close to it of Democratic legislators and the combined power of these cities could change the Sacramento political dynamic.

Historically, such political entities have stayed away from Sacramento tenant fights, even when local preemption is at stake. Lobbyists for these cities also ignore tenant issues, depriving tenant constituents of powerful inside political help.

As a result, there has been no effort to roll back the Costa-Hawkins Act (which prevents rent controls on vacant units) regardless of its negative impacts. Tenant advocacy in Sacramento is left to the statewide group Tenants Together and to a patchwork of local groups, whose collective resources are no match for that potentially offered by the coalition of local governments described above.

I know that local activists prefer local solutions. It’s easier to think that SF’s rent hikes can be “solved” through stopping a particular project or demonizing a particular industry.

But if we are really serious about addressing rising rents, then the state preemption problem must be corrected.

While San Francisco cannot build its way out of the affordability crisis, increasing supply does impact demand. And the current rental housing boom going on in the city should reduce how much rents on vacant units go up in 2014 (very few new units came on board from 2009-2012, greatly adding to the supply-demand imbalance).

Because supply has some impact, the city needs to stop the conversion of apartments to tourist use. There are two ways to proceed.

First, the city passed a law in November 2012 (Chapter 41A of the Administrative Code) designed to toughen the existing measure designed to prevent such conversions. Unfortunately, the law’s fine print makes it difficult to enforce.

One problem is an administrative prerequisite that gives owners found in violation an opportunity to cure, which gives everyone a free chance for law breaking. Another is a civil attorneys’ fee provision unique in my experience that limits such fees to the amount of damages awarded by the court. Considering that civil actions designed to enjoin tourist conversions would not generate money damages, attorneys bringing these cases would essentially be doing so for free.
Given the lack of attorneys’ fees and that administrative hearings must precede the civil action, the law is likely left to an already very busy City Attorney’s office to enforce.

A better alternative is for all illegal conversions to be prosecuted as zoning violations. But this requires action for a very busy Zoning Administrator who lacks staff and resources to prosecute these cases. To use zoning enforcement as a tool to protect residential housing, the Mayor and Supervisors should consider funding a position in the City Attorney’s office totally devoted to this purpose.

There is growing support on the Board for some form of in-law apartment legalization. The question is whether this helps tenants by increasing the potential supply, or actually hurts by making existing in laws more expensive.

Yesterday, Mayor Lee announced he was tripling funding for Ellis Act eviction defense (a $250,000 increase) and adding an additional $700,000 for tenant counseling services. These measures will keep more longterm tenants in place and ensure that existing tenants benefit from the protections of existing laws.

San Francisco also needs to address the crisis of Section 8 voucher holders unable to obtain units they can afford. HUD limits on rent payments to landlords are below what most charge, leaving many entitled to subsidized housing unable to obtain it.

When this happened in the late 1990’s, Congress member Pelosi got HUD to pay higher rent rates for San Francisco. If efforts are not underway to do this again, they should be.

Finally, the single most important step San Francisco alone can take is to save its public housing stock. And for those seeking good news amidst rising rents and Ellis evictions, San Francisco has made reinventing and preserving its most affordable source of family housing a top priority.