What Activists Can Learn From Occupy Wall Street 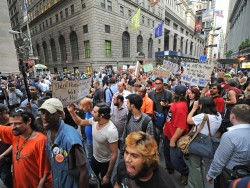 For some, Occupy Wall Street is a great strategy for bringing attention to the financial industry’s ongoing abuses and the political system’s unwillingness to control them. For others, it is more akin to a 1960’s “Be In” than a serious challenge to Wall Street power, as it lacks the specific targets and winnable demands customary in standard organizing campaigns. Activists can disagree on many aspects of the occupation, and debating its strategy (or lack thereof) adds to our learning curve. But the greatest lesson of Occupy Wall Street is hard to dispute: many have not given up hopes for real progressive change, and are now more likely to focus outside the electoral process. The challenge is channeling the energy demonstrated over a decade ago in Seattle, throughout the nation in 2008, and earlier this year in Madison and now at Occupy Wall Street into ongoing campaigns attacking social and economic inequality. And if you think the answer simply lies in pushing people to knock on doors for Obama’s re-election, you have missed the point.

In 1999, huge crowds of activists clogged Seattle streets and shut down the meetings of the World Trade Organization (WTO). In 2003, millions took to the streets to protest the U.S. invasion of Iraq, and 2006 brought the largest immigrant rights protests in the nation’s history.

Notwithstanding these major protests, grassroots activism in the United States since George W. Bush took office in 2001 has primarily focused on elections. But after the historic grassroots campaign of 2008 brought a President who defended rather than challenged Wall Street’s power, many activists lost faith in electoral politics. Some see ongoing protests outside Wall Street and other financial centers as more likely than the 2012 elections to reduce elite control of the economy.

Since FDR, many on the Left have believed that electing supporters of progressive policies is the best strategy for achieving real change. But while progressives obviously do better when Democrats control Congress and the White House, the disappointments of 2009-10 under this political alignment have left many potential activists unwilling to prioritize electoral politics.

This offers a challenge for national organizations focused on electing Democrats in 2012, including Move On, Democracy for America, and the AFL-CIO. On the one hand, these groups and others engaged in electoral work strongly support Occupy Wall Street, with Move On joining the action by holding a “Virtual March on Wall Street” on Wednesday, October 5. On the other hand, these groups are so committed to electoral politics that they are unlikely to aggressively boost non-electoral activism as the calendar turns to 2012.

If Occupy Wall Street does nothing more than convince progressive groups to focus more on issues rather than candidates, it will have proved a great success. While others can debate how broadly “representative” are the participants in Occupy Wall Street, its success in getting people involved in a larger cause is something election-oriented progressive groups have failed to do since early 2010.

Younger people may not realize that activists once focused on elections for a few months every two or four years, and spent the intervening years protesting, marching, boycotting and organizing around issues. Today, such actions have declined despite historic unemployment and the broader economic crisis, and in its place electoral activism is virtually nonstop.

That’s why progressives are so excited about Occupy Wall Street, the Madison sit-in and the many labor strikes that have swept the nation in 2011 – there is a realization that electoral politics has drained the soul and spirit from progressive grassroots activism, and that there are other ways to achieve its goals.

I’m not suggesting that activists abandon electoral politics; rather, such contests must be seen as only one among many strategies, rather than the exclusive or even leading agent for change.

Keeping Eyes on the Prize

Occupy Wall Street began as a protest against the big banks that wrecked the nation’s economy yet made out like bandits. Now activists must maintain this focus following Saturday’s arrest of over 700 Brooklyn Bridge protesters (video here.)

Like many other major cities, New York City has a sad history of denying protesters’ rights. Police crackdowns often end protests and deter participation from people afraid of being wrongly caught up in the broad net of arrests.

Those wrongfully arrested want to tell their stories, and when you have conflicting accounts of what preceded the arrests – with videos being distributed by both police and activists – getting the truth out becomes paramount. But when the police become the focus, the wrongs of the big banks recede into the background.

Time and time again, activists have allowed police crackdowns to divert attention from the source of the protests. It is smart to highlight police tactics that themselves convey the protesters’ message – as occurred in the 1960’s when white officers assaulted non-violent African-Americans marching for civil rights – but activists cannot build a national movement against Wall Street by focusing on local police.

Those who want to use Occupy Wall Street to promote public space access in the post 9/11 era, or to highlight the state’s reliance on suppression to squelch dissent, are free to do so. But Wall Street is ripe for a populist challenge, if activists keep their eyes on the prize.

You can keep up with events across the nation at the Occupy Together website.

Randy Shaw is the author of The Activist’s Handbook.