What About the Children? 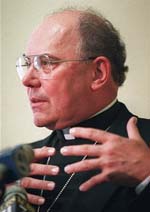 The Roman Catholic Church learns the Spirit and Heart of San Francisco can’t be found in a Paperweight.

The anger, hurt and pain caused when Cardinal William Levada attacked the policy which brought five Bay Area children together with adoptive parents, is the unstated issue fueling a controversy stretching from City Hall to the Vatican.

Last week, in ceremonies at the Vatican, Levada became Cardinal, arguably the Vatican’s second highest ranking official and prefect of the Congregation for the Doctrine of the Faith. He becomes the moral authority determining right and wrong for Catholics world wide. Said another way, he is one of the few in the world who have “playing God” as part of their job description.

To prove the point, the Boston Globe reported March 10 that the San Francisco Archdiocese received instructions from Levada saying, “Catholic agencies should not place children for adoption in homosexual households.” The instructions were based on a 2003 Vatican document which says placing children in gay households “does violence to those children.”

While Archbishop of San Francisco, Catholic Charities, the church’s social service agency, brought five gay couples together with five children. Levada never questioned or challenged the relationships. His decision to now attack the policy bringing these families together has been described as insensitive, false and particularly cruel.

Mayor Gavin Newsom has strongly denounced Levada and the Board of Supervisors unanimously passed a resolution reflecting their anger and disgust.

Meanwhile, SF Police Commissioner Joe Veronese led a delegation to watch the Vatican installation ceremonies. With Veronese was a crystal embossed official Seal of the City of San Francisco which was presented to newly installed Cardinal.

“We now have a friend in the Vatican who understands San Francisco’s values that could help to break down the walls of disagreement and divisiveness by getting to know each other’s points of view, and respecting those points of view based on mutual respect,” Veronese said to Levada in reports filed from Rome by the San Francisco Sentinel.

Supervisor Tom Ammiano, who authored the Supervisor’s resolution, questioned what right Veronese had to possess, much less present, the official Seal to Levada. City law says the Clerk of the Board has custody of the San Francisco corporate seal and only the supervisors can authorize its use.

The Board of Supervisors resolution, which passed unanimously said, “The statements of Cardinal Levada and the Vatican that ‘Catholic agencies should not place children for adoption in homosexual households,’ and ‘Allowing children to be adopted by persons living in such unions would actually mean doing violence to these children’ are absolutely unacceptable to the citizenry of San Francisco.”

The resolution continues saying “Such hateful and discriminatory rhetoric is both insulting and callous, and shows a level of insensitivity and ignorance which has seldom been encountered by this Board of Supervisors.”

Comments by Mayor Newsom were equally strong. “The idea, the principle that two loving parents of the same sex can’t be great parents and that this church is now going to start attacking gay adoptions in this country and around the world is really disconcerting,” Newsom said in a recent San Francisco Sentinel interview.

“Somehow inherently that two people of the same sex can’t be loving parents to me is patently offensive. The notion that a man and woman are going to be better parents… doesn’t mean that necessarily it’s going to be better for the child and I just think that is wrong.”

Clearly, the anger and disgust coming from City Hall was real. Concern for these five children, their parents and the hurt Levada might cause increased the emotional reaction.

That Commissioner Veronese praised Levada and presented him with an official Seal of the City of San Francisco increased perceptions that actions by the Supervisors and statements by the Mayor were simply being disregarded.

This week City Hall powers were doing their best to neutralize Veronese and his actions in Rome. The most expeditious solution emerged Tuesday afternoon when it was announced the official City Seal was no longer official. Though produced by the Office of Protocol, a spokesperson for the mayor said what was at the Vatican was simply a paperweight.

If the paperweight was only that, the reasoning went, few would care what private citizen Veronese thought or said about Levada or anyone else.

An aide to Ammiano quickly pointed out: “If it was produced by the Office of Protocol, it is official.”

And it is from that “Emperor has no clothes” world that truth emerges.

The truth is the intent of Commissioner Veronese was clearly to honor the new Cardinal and he did. Cardinal Levada received a gift, which when unwrapped, revealed the Seal of the City of San Francisco placed within a crystal paperweight.

Whether it looked like a paperweight or an official City Seal, Commissioner Joe Veronese presented newly installed Cardinal William Levada a gift representing the spirit, heart, government and people of San Francisco.

In truth this was a symbolic representation of who San Franciscans are just as Christians believe bread and wine represent the body and blood of Jesus Christ. Today, the more honest position declares, like bread and wine, there is a spiritual declaration that San Franciscans possess a collective value system and a moral compass which, if need be, will stand and hold its own against the Roman Catholic Church and those who claim to be the moral authority over the world.

Now a resident of Rome, Levada’s primary reason for returning to America is to respond to subpoenas to be depositioned in alleged child molester and pedophilia cases against Catholic Priests. Elevated to the position of authority on issues of morality, Levada seems tragically sucked into a garbage dump of ecclesiastical perverts.

The current statements from Levada and the Catholic Church, however, present Newsom with other serious concerns. He sees, as many do, how Levada’s remarks can have real tragic consequences for those five recently adopted children. “I’m concerned because I think the practical application of that in San Francisco is going to be very damaging,” Newsom said.

What Newsom understands, which somehow is of little concern to Levada, is the reality that those five adopted children all live in the Bay Area. All are of sufficient age to grasp, though not fully understand, the remarks of the Cardinal.

Possibly most chilling is knowing the second highest prelate in the Roman Catholic Church has said, for these children to hear, that he wants no children to ever again be saddled with parents as bad and as morally bankrupt as what they have inherited.

The theme which continues to emerge is the total lack of respect for the bodies, the minds or the spirit of these five children, or apparently any child.

Clearly the challenge facing the Roman Catholic Church is the need to look within before allowing their desires when looking outside to cause hurt and pain, especially to children.