We’ve Waited for This Revolution for Years: Other Despots Should Quail 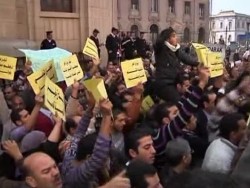 Change is sweeping though the Middle East, and it’s the Facebook generation that has kickstarted it

Ed. Note: This piece was first published in the UK Guardian.

My birth at the end of July 1967 makes me a child of the naksa, or setback, as the Arab defeat during the June 1967 war with Israel is euphemistically known in Arabic. My parents’ generation grew up high on the Arab nationalism that Egyptian president Gamal Abdel Nasser brandished in the 1950s. But we “Children of the Naksa”, hemmed in by humiliation, have spent so much of our lives uncomfortably stepping into pride’s large, empty shoes.

But here now finally are our children – Generation Facebook – kicking aside the burden of history, determined to show us just how easy it is to tell the dictator it’s time to go.

To understand the importance of what’s going in Egypt, take the barricades of 1968 (for a good youthful zing), throw them into a mixer with 1989 and blend to produce the potent brew that the popular uprising in Egypt is preparing to offer the entire region. It’s the most exciting time of my life.

How did they do it? Why now? What took so long? These are the questions I face on news shows scrambling to understand. I struggle with the magnitude of my feelings of watching as my country revolts and I give into tears when I hear my father’s Arabic-inflected accent in the English of Egyptian men screaming at television cameras through tear gas: “I’m doing this for my children. What life is this?”

And Arabs from the Mashreq to the Maghreb are watching, egging on those protesters to topple Hosni Mubarak who has ruled Egypt for 30 years, because they know if he goes, all the other old men will follow, those who have smothered their countries with one hand and robbed them blind with the other. Mubarak is the Berlin Wall. “Down, down with Hosni Mubarak,” resonates through the whole region.

In Yemen, tens and thousands have demanded the ousting of Ali Abdullah Saleh who has ruled them for 33 years. Algeria, Libya and Jordan have had their protests. “I’m in Damascus, but my heart is in Cairo,” a Syrian dissident wrote to me.

My Twitter feed explodes with messages of support and congratulations from Saudis, Palestinians, Moroccans and Sudanese. The real Arab League; not those men who have ruled and claimed to speak in our names and who now claim to feel our pain but only because they know the rage that emerged in Tunisia will soon be felt across the region.

Brave little Tunisia, resuscitator of the Arab imagination. Tunisia, homeland of the father of Arab revolution: Mohammed Bouazizi, a 26-year-old who set himself on fire to protest at a desperation at unemployment and repression that covers the region. He set on fire the Arab world’s body politic and snapped us all to attention. His self-immolation set into motion Tunisian protests that in just 29 days toppled Zine El Abidine Ben Ali’s 23-year dictatorship. We watched, we said wow and we thought: that’s it? Ben Ali ran away that quickly? It’s that easy?

Ben Ali called his armed forces for help 27 days into the popular uprising. It took Mubarak just four days into Egypt’s revolt to call the army. He had unleashed the brutality of his security forces and their riot police, but they couldn’t stem the determination of the thousands who continued to demand his ousting. He put Egypt under information lock-down by shutting down the internet, Burmese-junta style, but still they came.

Ben Ali’s fall killed the fear in Egypt. So imagine what Mubarak’s fall could do to liberate the region. Too many have rushed in to explain the Arab world to itself. “You like your strongman leader,” we’re told. “You’re passive, and apathetic.”

But a group of young online dissidents dissolved those myths. For at least five years now, they’ve been nimbly moving from the “real” to the “virtual” world where their blogs and Facebook updates and notes and, more recently, tweets offered a self-expression that may have at times been narcissistic but for many Arab youths signalled the triumph of “I”. I count, they said again and again.

Most of the people in the Arab world are aged 25 or are younger. They have known no other leaders than those dictators who grew older and richer as the young saw their opportunities – political and economic – dwindle. The internet didn’t invent courage; activists in Egypt have exposed Mubarak’s police state of torture and jailings for years. And we’ve seen that even when the dictator shuts the internet down protesters can still organise. Along with making “I” count, social media allowed activists to connect with ordinary people and form the kind of alliances that we’re seeing on the streets of Egypt where protesters come from every age and background. Youth kickstarted the revolt, but they’ve been joined by old and young.

Call me biased, but I know that each Arab watching the Egyptian protesters take on Mubarak’s regime does so with the hope that Egypt will mean something again. Thirty years of Mubarak rule have shrivelled the country that once led the Arab world. But those youthful protesters, leapfrogging our dead-in-the-water opposition figures to confront the dictator, are liberating all Egyptians from the burden of history. Or reclaiming the good bits.

Think back to Suez to appreciate the historic amnesia of a regime that cares only for its survival. In cracking down on protesters, Mubarak immediately inspired resistance reminiscent of the Arab collective response to the tripartite aggression of the 1956 Suez crisis. Suez, this time, was resisting the aggression of the dictator; not the former colonial powers but this time Mubarak, the dictator, as occupier.

Meanwhile, the uprisings are curing the Arab world of an opiate, the obsession with Israel. For years, successive Arab dictators have tried to keep discontent at bay by distracting people with the Israeli-Arab conflict. Israel’s bombardment of Gaza in 2009 increased global sympathy for Palestinians. Mubarak faced the issue of both guarding the border of Gaza, helping Israel enforce its siege, and continuing to use the conflict as a distraction. Enough with dictators hijacking sympathy for Palestinians and enough with putting our lives on hold for that conflict.

Arabs are watching as tens of thousands of Egyptians turn Tahrir Square into the symbol of their revolt. Every revolution has its square and Tahrir (liberation in Arabic) is earning its name. This is the square Egypt uses to remember the ending of the monarchy in 1952, as well as of British occupation.

The group of young army officers who staged that coup in 1952 claimed it as a revolution, heralding an era of rule by military men who turned Egypt into a police state. Today, the army is out in Tahrir Square again, this time facing down a mass of youthful protesters determined to pull of Egypt’s first real post-colonial revolution.

Mona Eltahawy is a writer and lecturer on Arab issues. She writes for Qatar’s Al Arab, Israel’s The Jerusalem Report, Metro Canada, the Washington Post and the International Herald Tribune