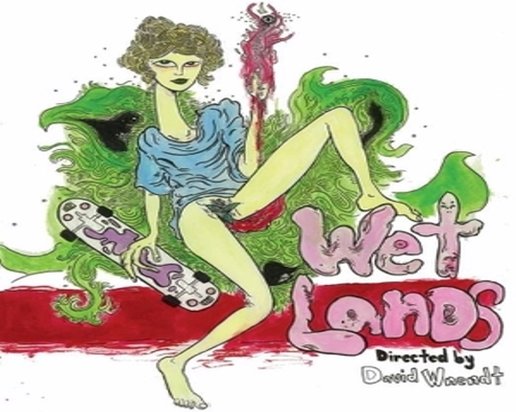 David Wnendt’s “Wetlands” matches Charlotte Roche’s source novel with a controversial adaptation likely to cause a carful of MPAA censors to spontaneously combust in outrage and disgust.  This entertainingly divisive film, which arrives Friday at SF’s Embarcadero Center Cinemas, opens with a complaint to Der Bild which declares the controversial Roche novel shouldn’t be read or adapted into film.   The director cheekily taunts the anonymous complainer with a deceptive opening close-up of lead character Helen’s “bare posterior.”  Yet that introductory image feels almost innocent compared to the erotic shaving, drug binging, and genial atheism (among other events) that occur over the film’s 100-plus minutes.

Helen Melem (Carla Juri in an amazing performance) is a young woman who’s sexually excited by moist bodily fluid contact.  A freak shaving accident involving her anus lands her in the hospital.  Having her divorced parents reunite during her recuperation seems to be Helen’s primary goal.  But her energies also seem directed towards ensnaring the heart of her handsome male nurse Robin.   As these two efforts play out, the story drifts among Helen’s recollections of her odd childhood and darkly hilarious sexually-themed anecdotes.

Wnendt’s film may not possess the political charge of a ribald tale of hypocritically lecherous clergy.  Yet Helen’s confidence about both her sexuality and her willingness to experiment with new desires feels refreshing to those irritated by media slut-shaming.

Juri’s fearless acting makes the sexually open Helen more than a fleshly kink doll.  Her behavioral quirks are rooted in understandable causes.  For example, the young woman’s dismissive attitude towards personal hygiene feels like a negative response to her mother’s cleanliness fetish.  But seeing Helen’s used tampon trading or her nonchalantly stepping barefoot through a filthy flooded public toilet equally evokes both viewer admiration and nausea.

The lead character’s goal to re-unite her divorced parents may seem jarringly conservative given her freewheeling behavior.  Yet what lies behind that goal jibes with that character’s personality.  In Helen’s mind, reality, lies, and dreams aren’t safely caged.  Instead, they’re free ranging perceptions of equal value.  The predictable behavior of Helen’s parents, with their sexual proclivities and religious fervor, provide what feels like an emotional wall that she can madly graffiti with her whims and odd statements.

Figuring out which events actually happen to Helen, which are dreams, and which are just entertaining lies provides a constant puzzle to the viewer.  Having an avocado plant grow out of the young woman’s vagina can easily be classified as a dream.  The rationale for making and using homemade tampons is probably a reasonable if weird lie.  But what is one to make of Helen’s claim that she had herself sterilized to avoid bringing more neurotic children into the world?   Did she actually do so, or was it her veiled criticism of what seemed like a curse regarding the mental health of the family women?

In fact, Helen’s comfort with her sexuality doesn’t rely on male approbation.  Her frequent licks of her vaginal fluid deliver delicious self-pleasure.  Robin is less Helen’s master and more a slave chained by rules and propriety.  He’s the one who needs Helen’s presence to achieve emotional liberation.

The protagonist may offhandedly declare to Robin she’s got “nothing to hide.”  Yet as random returns to an enigmatically remembered dinner party show, one need not be consciously aware to be able to conceal something.

What makes that ultimate truth hard to discern Is Wnendt’s extravagant use of a spectacular palette of visually inventive tricks.  An opening title animation offers a fun trip through a micro-organism jungle that’s reminiscent of the opening to “Fight Club.”  Helen and Corinna’s tear through a mistakenly abandoned stash of illicit drugs is juxtaposed with the unsuspecting stash owner’s visit to a tough-looking group with little love for paid but undelivered goods.

But the film’s comic highlight would have to be its notorious pizza sequence.  Wnendt renders this potentially gross and disgusting segment oddly beautiful and artistic.  Viennese citizens will have good reason to launch evil hoots at “Wetlands”’ act of artistic revenge.   A certain unamused composer, on the other hand, may want to come back from the dead to join outraged Domino Pizza executives to pay a hit team to take out Wnendt and Roche.

But there’s no reason for such aesthetic hostility.  The film director defuses viewer disgust over Helen’s scabrous antics by highlighting their light-hearted aspects, even when the protagonist licks a gym horse pommel.  Pair the film’s comedy with a score heavy with punk songs and even a couple of tunes from anti-rock singer Peaches, and the result is a film that delivers with a smile an energetically rude disrespect for propriety.

The condemnatory letter to Der Bild quoted at “Wetlands”’ beginning offered the simple solution of surrendering oneself to God as the answer to Roche’s worldview.  Yet accepting this view means accepting such social hypocrisies as treating Helen’s more provocative statements as equally as offering someone a cup of water.   Helen’s button-punching honesty in word and deed dares the viewer to confront the circumstances that inform her offbeat viewpoint.