West Side Story – “This IS Broadway!”; A Chorus Line – “Exhilarating!”; Carly Ozard – “Dazzling!” 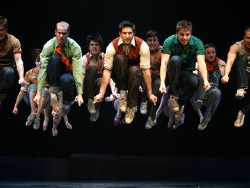 WEST SIDE STORY SCORE IS THE ‘STAR’

The leads Tony (Kyle Harris) and Maria (Ali Ewoldt) have some lovely duets together – but they are hampered with some sound issues that have nothing to do with their voices. Maybe that will be fixed by the next performance. The soaring rendition of ‘Tonight’ (which is reprised a lot) is lovely to hear, as is the very emotional “Somewhere.”

Anita (Michelle Aravena) and Rosalia (Dea Julien) still girate their way through “America.” It’s a good version, but some of the spark of the song is like a car with some parts missing. Of course – we can’t help but think of Chita Rivera (created role) and Rita Moreno that defined it. We are spoiled – that’s for sure. I’m not sure that Robbins and Bernstein would have approved of this new version.

The Romeo and Juliet love scenes have their exhilarating moments. The musical has more the feel of an Opera, as the singers don’t really sing much looking at each other. Like an Opera – the principals sing to the audience, which takes away the feeling of human contact.

But taking the entire show into consideration – it is still one of the greatest love stories of all time. And the conflict between two races is still pertinent today. Like in real life, the cultures can’t seem to short-circuit their misguided feelings.

No doubt about this: The dancers have plenty of splendid energy. They are outstandingly sensuous – and radiate joy.

This mythic musical may not be as strong as when it first debuted on Broadway. But, I still would recommend seeing it. Especially, if you have never seen “West Side Story” — you will probably view it as something really astounding. It’s a perfect ‘date’ story for the young.

AT THE ORPHEUM THEATRE

A Chorus Line at CCMT. Courtesy Photo of Cast.

FIFTY YEARS FROM NOW, WE WILL BE WATCHING “A Chorus Line!”

Each time that I see “A Chorus Line” — I never get bored. With a little nick and tuck here and there – ZAP – It’s a whole new musical. I have followed this musical from its Broadway debut to Contra Costa, and CCMT has come up with some really interesting twists. So, even if you have seen the show before – you have not seen this new re-energized version. The staging brings breathtaking action sequences to the fore, unlike anything you’ve seen before.

The story of course is about young people who “really want a job” as a dancer in a new show. The audition process is brutal. Not everyone gets to stay in the show. Having gone through painful auditions myself – I can testify how brutal the guy out there in the dark is when he says: “You go – thank you” to the next person – “You stay.”

In this Chorus Line Zach (Joel Roster) is the director – who has issues. Especially with a lost love (Cassie), a dancer who used to be the featured dancer in shows is now vying for a spot as just another Chorus Girl. She pleads to Zach. – “I really need this job.” It’s an emotional pull and tug between the two.

What is different is the larger role that Zack now plays. We see him more on the stage. In other productions – he is just a voice in the background. Seeing him and Cassie together makes the story seem more plausible as she argues and pleads with her former love (director Zack) – “To please let her dance.” He finally gives in after many emotional outbursts. And Cassie dazzles us with the brilliant and emotional “The mirrors dance number.” (Renee DeWeese) – certainly fits the role perfectly. Her emotions keep us on the edge of our seats.

Alex Rodriquez (Paul) tells the story about his young life he tries to deal with his sexuality. His emotional words about how he wanted to be in show business, but could only get a job in a drag show, which was not what he had in mind. Rodriquez wrings tears out of the audience. He’s impressive. There is only one minor thing. We were able to hear every word from each actor, except from Rodriquez. I think it was the sound system. For his role that requires him to speak lower at times – the sound needs a few more sparks. Many “seniors” around me were asking each other – “What did he say?”

“SEE IT! THERE SHOULD BE DANCING IN THE STREETS! THIS IS BROADWAY!”

“I always knew I was a star and now the entire world knows it.” – Freddie Mercury. Then Carly Ozard launches with Mercury’s song “Don’t Stop Me Now” – and instantly, she became a “High Flyin’ Adored” Star.

Ozard’s show is a tribute to Freddie Mercury, who died way to early in life. I had heard many of Mercury’s songs along the way – but never really became a fan, until I saw this show. There is something about seeing someone sing ‘Live’ that gives it that extra thrill. Listening to a C.D. just doesn’t have the same excitement. Now, all of a sudden – I am a Freddie Mercury Fan.

On each side of the stage are two large screens with some clips of Mercury and Queen as Ozard on the stage in person sings “Under Pressure” (words and music by Queen and David bowie.) A handsome picture of Mercury — suddenly appears on the side screen as Ozard gives her version of the fantastic “Love of My Life.” This evening of Mercury (and Queen) is the most inspiring music that I have ever heard. Ozard sings gloriously triumphant, with perfectly placed harmonies and tight arrangements. Pop and classical music styles simply astound us in the vocals.

Joining Ozard on the stage is specialty actress/singer Katya Smirnoff-Skye (guest vocalist) joins Ozard on Mercury’s famous duet “Barcelona” as the screens flash visions of Mercury and Montserrat (who became great friends). The voices of Skye and Ozard’s voices compliment each marvelously. What a triumph!

Ozard sings the emotional “Too Much Love Will Kill You.” Lyric: — ‘I feel like no one ever told the truth to me.” O.K. — get out the hankies – you’ll need them.

“We Will Rock You” – an audience favorite really rocked the room. Ås Ozard sings — candles were being waved in the air – with many singing along. The words and music are by the famous Brian May.

Carly Ozard has a hit with her show called “Somebody to Love – A Tribute to Freddy Mercury.” She should tour with it.

****Here is an interesting fact: We know him as Borat and Bruno, but Sacha Baron Cohen is set to star in a new biopic about Queen’s Mercury. Writing by Peter Morgan, who wrote the scripts for “Frost/Nixon” and “The Last King of Scotland.” Surviving members Brian May, Roger Taylor and John Deacon – have given approval for use of the band’s music in the movie. It’s not known whether Baron Cohen will sing the songs, or whether Mercury’s voice will be used instead. Here’s an Idea. Why not have — Carly Ozard sing the songs?