Were Feds After Former Mayor Lee? 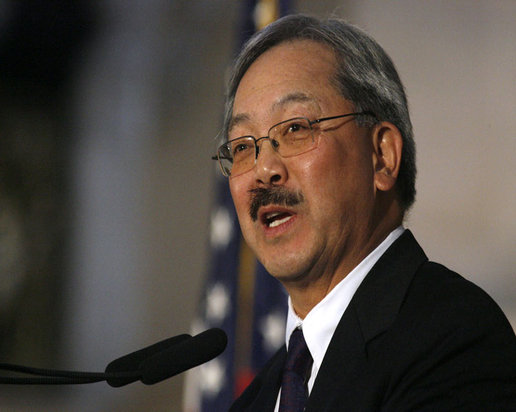 According to Phil Matier’s December 6 SF Chronicle story, if former San Francisco Mayor Ed Lee were alive “he would be deep in the U.S. attorney’s investigation into corruption at City Hall.” Matier bases this on Lee’s friendship with Walter Wong and on having appointed Mohammed Nuru and Harlan Kelly. Matier adds that Lee is identified as “code 35” in the Kelly case, though the reference is not connected to any corruption.

Matier’s comments add to what many have long believed: Lee was always the prosecution’s chief target. Just as Willie Brown was targeted when he was mayor (either despite or because he was long the nation’s most powerful Black political leader). The feds could not find criminal wrongdoing against either. In Lee’s case, the feds found others.

The feds tried their best to take Lee down. Remember the stories surrounding “Shrimp Boy’s” 2014 arrest and 2016 conviction? The false claims by those being prosecuted that Lee took illegal donations? These claims were made by those needing to offer prosecutors something to reduce their own sentences. The feds worked tirelessly to bring Lee down and utterly failed to touch his integrity.

Many suspected Lee was under federal watch due to his friendship with Walter Wong. I’ve read many stories about Wong since his arrest. What I find most wrong is the idea is that he was part of the city’s ruling elite, and protected thereby.

Walter Wong was little known to the public until he leased his office space off Mission Street for Matt Gonzalez’s massive grassroots 2003 mayoral campaign. Aligning with the Green Party’s Gonzalez  put Wong in the cross hairs of the city’s elite, particularly Gavin Newsom. After Newsom took office he soon declared war on “permit expediters.” Wong wasn’t the only expediter and most were white. Yet the media profiled Wong as the quintessential expediter. Overnight he became the public symbol of a profession now blamed for alleged favoritism in the city’s permit processing system.

A hearing on the alleged permit expediter scourge was held in 2004 at the mayor’s urging. It was one of the most entertaining I ever attended. Here’s why.

The hearing to end the alleged abuses by Wong and other permit expediters in San Francisco resembled those held by Trump attorneys claiming voter fraud. A lot of bluster with no evidence.

It turned out that residents quoted in newspaper stories about seeing Walter Wong and other expediters jump ahead in line and go behind the desk of planners had not personally witnessed any of this. They’d only been told about such actions by others. None of those “others” attended the public hearing designed to root out and expose permit expediter corruption once and for all.

They didn’t attend because, as with Trump’s election deniers, they had no facts.

The hearing ended with proposed legislation being tabled. And it has not resurfaced. San Francisco has permit expediters because homeowners and landlords doing renovation project want them. Most don’t have the time or desire to wait in line for permits, nor the expertise to answer essential questions that come out of the permit processing process.

No, the code cannot be made “simpler” or more “straightforward.” We’re talking about a building code that has many state as well as local requirements. When you are dealing with new electrical, plumbing or foundation work, multiple code issues emerge. People should not confuse getting building permits with waiting to renew a drivers’ license.

If supervisors want to focus on permit expediters while businesses across the city close, that’s their choice. But don’t expect the system to change. (For the record, neither myself nor my organization has  ever used permit expediters).

Finally, one question remains around the Wong corruption scandal. As the SF Chronicle’s Heather Knight asked, “Why are these high-powered, very well-paid (many would say overpaid) government officials allegedly risking it all for such piddly prizes?”

I would add this: is it true that only non-white officials the beneficiaries of Walter Wong’s largesse? I find that very unlikely. Yet all of the top city officials targeted by the feds are non-white.

Randy Shaw highlights Mayor Ed Lee’s housing legacy in Generation Priced Out: Who Gets to Live in the New Urban America