We’re all Bots according to new play; Look at what you’re missing in “Scene and Heard” 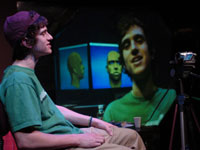 He’s a Bot, She’s a Bot, you’re a Bot – we’re all Bots. In the play “Bot” on the Magic stage is Charliebot, who is a human who is becoming more computer than human. Somehow he gets so involved in the computer world and the scientific possibilities that he basically is only interested in a virtual character that he has created called a ‘chatbot’. The idea may seem impossible, but you know that it is possible. How many hours a day do you spend on the computer with no human contact. I see them all over the place in Starbucks and other coffee shops. They spend hours in these places lost in the computer, oblivious to what is going on around them.

Yeah, it’s a scary world – and we are all being sucked into it. Right now one of your kids is becoming a chatbot. Hello Dell! That’s whom they are talking to. Not to you Mom and Dad. The kid wants you to stay out of his room. Just put the food under the door. Actually once you get to be a chatbot – you will not really crave food. Those energy drinks will keep you going for another virtual conversation with a character that you created. What ever happened to Dolls and Teddy Bears?

BOT IS LIKE BOTULISM. It begins to eat your brain. You live and breathe for your virtual world. And, as happens in the play “Bot” — it WILL kill you.

There are other stories in ‘Bot’. The Teens folks are professional bores, who never pay attention to what the kid is doing – until it’s too late. They pass off his being a recluse as Genius. Oh, there is not doubt – the computer babies do have a certain kind of genius.

Not only do “Charlebots’ parents pay no attention to him…their marriage is a sham and the husband manages an affair between his make-work schedule and charliebots mother is so tied up in being the head of a corporation that she herself becomes a ‘corporatebot’. When everything falls apart around their ordered little life. They even check their emotions even as the floor they stand on tremors like an earthquake.

All the various paths that people take in this play are not unknown territory. We know these people. They are self-centered boors and their kids might as well be stuffed. They have no life, no friends except the computer. And as this trend continues all of the nut houses will have to furnish the patients with computers so that they can talk to their virtual Bot. Are you having fun yet?

Here is a telling line Mom says to the straying Dad. “That might explain why your priority is the woman away.” And isn’t that the way it is with all dull and dysfunctional families? Even their explanations are dull as ‘S—t’.

Dan Hiat plays an intellectual writer, who is so prim and proper that you just want to go up and the stage and slap him till he becomes more real. Yeah, its what the part calls for – but I’ve had enough of these college professor types. Get some Prada clothes. And while you’re at it get a life. Jonathan Rosen is charliebot. He is very interesting. It’s like watching a lab specimen getting chewed up by some nasty virus. And they call it “The Computer”. The fabulous Julia Brothers plays the dis-engaged Mom who has no idea what is happening to Charlie till the end. Steven Irish is the boring, balding dad who is looking for love on all the desks in town. Being able to travel is his advantage.

O.K. here is the bottom chat. Bot is interesting. I think that with some changes it could be even better. The Technical effects directed by Kai Hecker are absolutely enthralling. The Director of the play Chris Smith, was sharp as nails.

Some of you will like it. Especially if you are a techbot. Others may find it to be just so-so. On the other hand, the plot twists keep you on the edge of the seat.

RATING: THREE GLASSES OF CHAMPAGNE!!!! At the Magic Theatre.

SCENE AND HEARD: THE UNMISSABLES

AND – ALTAR BOYZ AT THE ORPHEUM. This is one Altar that you will want to kneel down for. It’s uproariously intoxicating. It’s Hail Mary time in San Francisco.

Religion is big right now. On Union Square is the is the dark prison tale about two men caught up in the web of no return. “Jesus Caught The ‘A’ Train’ is remarkable and daring at the SF Playhouse on Sutter Street.

Golly…Let’s go to Hollywood and catch this one before it closes on April 1st. “Marilyn – Forever Blonde”. Sunny Thompson tells the Marilyn Story with words and music in a dazzling performance. It’s Marilyn like she really was. The show is a knockout! At The Stella Adler Theatre, just down the block from the Kodak Theatre, where they hold the academy awards. History: The Adler Theatre was once a ‘speak easy’ where the stars used a password to get in the door. There is plenty to see in this historic theater. Photos from the 30’s of stars and the club. Ask Greg for a tour. He knows all the background secrets.

THESE MAY BE TOMORROWS HITS!

At the New Conservatory Theater will be Terre Haute, a play about the Oklahoma Bomber suspect and his meeting writer Gore Vidal. Interesting concept. We will be watching at the last preview – which is what they now call the Press Opening. Of course, the real opening will be on the next night (Saturday). You know the one where they have a buffet like other theaters do on opening night that includes the press. Where are you Victoria Kirby when we need you?

Broadway by the Bay opens its new season with “Show Boat”. The classic just keeps rolling along. It will be performed with a full Orchestra in this great space in San Mateo. Ever since its premiere – Showboat has always been a huge hit.

Another Broadway Hit will be on the TheatreWorks stage in Mountain View. Merrily We Roll Along premiered on Broadway in 1931. It was delightful then, and it’s still delightful. Can ‘t wait to see it. Take the Cal Train – it’s fun and delightful and think of all the fuel you will be saving.

Don’t forget Monday April 16 for the “One Night Only Show” at the Club Fugazi. The show will feature company members from the cast of Jersey Boys. It’s always an outrageous evening of song, dance and lots of comedy. Visit their webpage for more: www.helpisontheway.org. You’re gonna love it – believe me! And…it’s for a good cause.

Have you heard: Now there is an American Idle contest. Notice how Idle is spelled. That’s because these Idols are in Prison Babe. Check this out…as Randy would say: “It’s O.K. Doll…but those cuffs just took away the look of the outfit. You need to move your arms more. It just didn’t do it for me, Doll”. Buzzin heard some of them sing…and you know what? They are better than American Idol. Do I see a C.D. in the future from the winner of the take-off called “American Idle? You better believe it, Doll.

Know anything delicious and wicked? I’m up to it. Send it to me.