Welcome to the New Great Depression 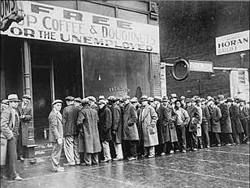 Oh beautiful, for spacious skies, for amber waves of grain …

Like a broken record, President George Bush continues to assure us that his tax rebate checks will stimulate an economy that is merely in a “slowdown.” The new middle-class homeless in Santa Barbara can take comfort in that thought as they sleep safely in their cars in parking lots that are now designated for that purpose. Perhaps they can imagine all that they can spend the money on, as they eat fast food in styrofoam containers and stroke the dog or cat on their laps. It won’t pay for first and last month and security deposit on an apartment, but it might buy enough $4-a-gallon gas to go back and forth to work for a few weeks.

The parking facilities, the first in the nation, open at 7pm and close at 7am. They operate through a special program that circumvents California’s law against sleeping in cars. The director of that program told CNN recently that one cause of the spike in middle-class homelessness is that Santa Barbara has been hit hard by foreclosures.

“It saddens me when they live in their vehicles,” said Shaw Tolley, who works with the program. “It is not the ideal situation for senior citizens and families, but it is a reality.”

It’s a reality in an America where the dollar is worth little overseas and the price of energy is creeping up every day. An America where the millions of homeless who routinely sleep on our streets and under bridges and in parks are being joined by the folks who used to step over or around them every morning on the way to the rat race. Or call the cops on them.

Welcome to George Bush’s raped and plundered America, where his buddies in the oil industry reap unprecedented profits (Exxon alone made $11 billion in profit from $117 billion in earnings in the first quarter of the year), while the sons and daughters of the working- and middle-class die in the Middle East to secure that same energy source for the gas guzzling cars of their families and friends.

It’s a topsy-turvy world in which politicians debate bans on gay marriage, while more children go to school hungry than ever before in this country’s history and healthcare costs are driving millions of adults into a bankruptcy they can’t declare because of new laws that favor the corporations, not the little guy.

An America whose media continues to wax poetically about the war against terror, as if allowing healthcare and housing to be commodities out of reach of a growing number of Americans isn’t the real terrorism. A media that will never acknowledge that it will take more than a stimulus package to feed, house and care for America’s needy.

The new Great Depression will never be televised.