by tiny/PoorNewsNetwork/POOR Magazine on April 26, 2005 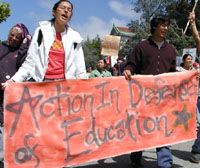 City College of San Francisco Students Walk Out of Classes in Protest of Tuition Hikes!

“He needs to stop playin’ his role and listen to the people.”
Determined words of resistance poured from the mouth of Arjuna Sayeed in response to my question about what he would say to Schwarzenegger ( aka Herr Governator- The Terminator).

I strained to listen to him as the minions of students passed us on their way to class at City College of San Francisco’s (CCSF) Phelan Campus. Arjuna, with CCSF’s Associated Student Council, was there passing out flyers about a rally and march that was happening that day, April 20th, on campus. But this wasn’t any march and rally, this was a WALKOUT from that day’s noon classes in protest to the $33.00 fee hikes proposed by the State Legislative Analyst Office.

“I feel responsible as a student to be here. City College is the ground level entry point for poor and working class students. This fee hike which is also proposed for the UC and State Campuses will make it impossible for many of those students to attend school,” said Sayeed. Arjuna, who is in school to become Special Ed teacher for disabled children worries that working class students of color like himself will be lose access to education entirely.

As he spoke I was reminded of my own very low-income, formerly homeless family’s non-income, which would feel the impact of these hikes and make it increasingly difficult for me to attend school at all.

The hikes are being proposed while increases of over 7 billion are proposed to fund California’s prisons. This is a 31.9% increase to the criminal Unjustice systems’ budget in the last two years

With the across the board cuts to social services and education proposed I am reminded of the fact that the people of California are always targeted as the way to “find” the surplus rather than the Corporate Welfare recipients (Enron, Halliburton, Chevron, PG& E and of course, Dick Cheny) who stole our state surplus with their (fake) energy crisis in 2001-02 and to this day have not paid our state back what they owe us thanks in part to the govenator’s own interest in energy stocks.

“He is loverboy for WALMART,” shouted Ed Murray, President of the American Federation of Teachers at the rally that followed a huge march of more than 700 students, teachers and administrators who walked out of their classes at noon and marched through the campus. “He won’t tax the rich, because he is one of them, but the good news is, he is a coward and if he gets pressure from the people – he will back down.” Ed reminded me of the huge rally outside of Schwarzenegger’s most recent rich people “fundraiser” at the Ritz Carlton Hotel by thousands of working people and educators across the state protesting his rape of California’s pension plan. That event was so effective that he did in fact shelve his nasty pension plan – for now, anyway. But stay alert, cause last year he proposed to gut and then rescinded those cuts to the In home Support Services Program, one of the few ways that disabled folks and elders can get help. He did in fact shelve those cuts after a huge outcry (I was one of the outcriers), and now he is starting that up again, proposing to drop the almost living wage salary of ten dollars an hour that his workers receive statewide to the minimum wage!

“He is not just cutting our school’s budget he is cutting our children’s schools’ budgets,” said Tracy Faulkner from the Students Parents United and director of CCSF Family Resource Center, who brought up the issue of how his cuts are across the board not just affecting ‘us’ but all of our poor children, trying to learn, trying to survive and trying to come up and out of poverty.

“We shall overcome from being dumb some Day,” spat Javier Ruiz, fellow poet and poverty scholar from Colored Ink. Ruiz was one of the last speakers at the rally, which included the scholarship, words and music of students, teachers and administrators of all communities and cultures. He did his We Shall Overcome poem in honor of all the “dumb” liars and politicians trying to ruin our lives, or as he so eloquently put it, “we have a man in the white house who is a cokehead and a straight up liar.”

For more art and journalism on issues of poverty and racism written by the folk who experience it first-hand go on-line to www.poormagazine.org.