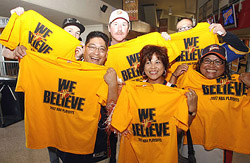 (Ed note: As Beyond Chron usually finds itself on the side of the underdog, we are thrilled to see the Warriors defy the skeptics, overcome the obstacles, and prevail. A positive message for us all!)

Baron Davis knew his tender hamstring would limit him, so Stephen Jackson took a huge load off Golden State’s do-everything star. Davis and Jackson shot the ragtag Warriors right into the second round, capping perhaps the NBA’s biggest playoff upset with yet one more memorable performance on their home floor.

Davis willed his team on one good leg, shaking off a strained hamstring to score 20 points, Jackson made a franchise playoff-record seven 3-pointers, and Golden State became the first No. 8 seed to capture a best-of-seven playoff series with a 111-86 victory over the NBA-best Dallas Mavericks in Game 6 on Thursday night.