We Are All Penn State 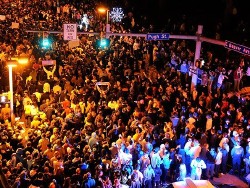 While criminal investigations and civil lawsuits begin burying Pennsylvania State University and Joe Paterno, the deposed iconic football coach, over their harboring for at least nine years (and probably 17 or more) of a serial child rapist assistant coach and ex-coach and pillar of the community, I suggest we all turn our attention to the last remaining myth undergirding the JoePa statue in front of Beaver Stadium and sanitizing the JoePa name on the campus library building. I also suggest we don’t stop there as we proceed to bring the Penn State scandal home, where it belongs, to our own schools and communities and mass insanity.

The myth goes like this: As a cautionary tale of the temptations of big-time football, Penn State is especially “ironic.” For, you see, the program over which Paterno ruled for nearly half a century, in polished insularity, was exceptionally “clean.”

I wonder how many people reading this piece have heard of a former Nittany Lions defensive end named LaVon Chisley. He is serving a life sentence for murder, which gives fresh meaning to the sour joke, “Penn State? They’re going to wind up in state pen.” In 2006, PSU student Langston Carraway – whose family had invited Chisley to live with them after his life spiraled into drug abuse and Paterno dumped him – was stabbed 93 times by Chisley.

Blogging for the Baltimore Sun, Chris Korman, who wrote a decade ago for the campus newspaper The Daily Collegian, said he was as disgusted as every other sentient person over the unchecked crimes against humanity by Jerry Sandusky through his associations with Penn State and the Second Mile Foundation for at-risk kids. But Korman was not shocked. An extended excerpt below – but first a program note: The most aggressive and prescient Pennsylvania journalist on the Paterno scandal has been a sometimes wacky Pittsburgh-based sports-talk host, Mark Madden, who cut his teeth reporting on (you guessed it) pro wrestling.

[Paterno] wasn’t the same cerebral intellectual-as-football-coach that I’d read about and admired as a kid …. He seemed entirely comfortable with the idea that he’d made his bones decades ago, and that was that. The culture surrounding him supported that notion, of course. It was almost impossible to question the tenets of his virtue without being labeled nothing more than a rabble-rouser. Yet his players ran amok and left us constantly reading through police reports and court documents, and Paterno too often dismissed their transgressions as boys being boys. He was lenient in exactly the way Joe Paterno was not supposed to be.

… Penn State has long operated in a bubble; major newspapers from Philadelphia and Pittsburgh did not insist on covering the football program thoroughly, and the townspeople in State College had it in their best interest to make sure the football team, the heartbeat of their little city (and economy), had few obstacles (i.e. players who aren’t academically eligible, or who get arrested).

Though the football team is something less than the economic heartbeat of my city, Berkeley, the DNA is familiar. You can’t have lived here for as long as I have and not be familiar with hushed-up police-blotter stories involving Cal football players. (I do not refer to the well-publicized cases, such as that of current National Football Leaguer Marshawn Lynch.) To the extent coach Jeff Tedford is held accountable, it is only for his ongoing failure to recruit and develop quarterbacks as good as Andrew Luck. Tedford’s program, too, is one of the “clean” ones. We all know that, because that’s what we’re told.

There is a sickness in our society, and it has a name: football worship. The symptoms are evident in red and blue states alike, in rural provinces and urban strongholds, in honkytonks and ivory towers, in profit-hungry enterprises and in the vicarious fantasy projections of paying fans and unpaid volunteer coaches.

This is not a problem that will be solved by bringing the National Collegiate Athletic Association to its antitrust knees, or by paying de facto professional college players something closer to their market value. And it won’t be solved by saying that it exists at Pisspot Polytechnic or USC or Miami or Ohio State … or Penn State … yet somehow not here, right here, where each and every one of us lives. We are all Penn State.