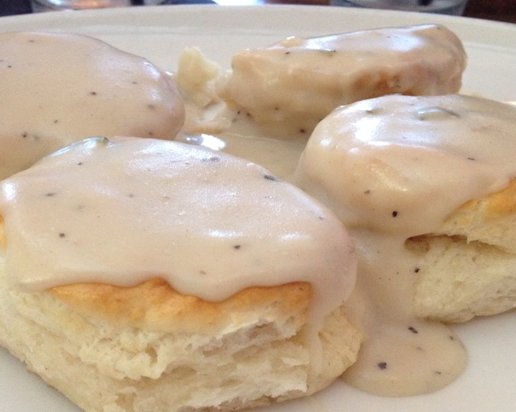 Last March, the School Nutrition Association featured a North Carolina school district’s celebration of their whole-grain waiver with free biscuits and gravy for students and staff. Even the Superintendent of Haywood County Schools in North Carolina had to clarify that the celebration wasn’t a joke: “To celebrate the temporary waiver, we are planning ‘Butter Biscuits are Back’ activities at each school on April 1st. No fooling, pun intended.”

SNA’s legislative infographic states that “the 2014 mandate that all grains must be whole grain rich has increased waste and contributed to the decline in student lunch participation…Schools should be permitted to serve white rice or tortillas on occasion, just like most families do.”

A poster child for the whole-grain waiver win?

Last March I cringed when I read SNA’s cover story “celebrating” North Carolina’s victory against whole grains. After living in the state for over a decade and witnessing firsthand the costs of diet-related chronic disease, I call this a blissfully ignorant victory lap towards claiming the “unhealthiest state” title. To be fair, North Carolina isn’t ranked the unhealthiest state in the U.S., it’s listed as the 45th worst state in childhood obesity and 48th worst in public school funding per student. So if SNA wants to use North Carolina as a poster child for victories against whole grains, by all means, have at it. However, knowing the benefits of whole grains, I doubt many public health professionals will back them up.

Whole grains are an important part of the school lunch equation because they provide children with much needed nutrients, including high dietary fiber content that leaves children feeling fuller longer. High fiber intake among adults has been shown to reduce the risk of heart disease and Type II diabetes. Under HHFKA, whole grain-rich foods must be at least 50 percent whole grain. So when SNA asks to roll back the whole grain content from 100 percent to 50 percent, they are basically asking that our children be served grain-based foods that are a measly 25 percent of whole grains.

Let’s focus on innovative solutions to problems, not elaborate excuses

Rather than focus on SNA’s excuses for why some schools have encountered challenges with preparing whole-grain rich meals, let’s focus on innovative solutions. As Bettina Elias Siegel, a school food policy expert, asked in her blog story on North Carolina’s whole grain waiver: “Are they using the Smarter Lunchroom techniques, giving active encouragement to get kids to try new foods, offering student sampling programs, or implementing any of the other strategies being successfully used in hundreds of districts around the country?”

Beyond behavioral economics and psychological techniques to nudge students towards healthier eating, there is a new strategy that involves the agricultural and culinary sciences. The founder of Chipotle Mexican Grill, Steve Ells, has teamed up with Washington State University’s Bread Lab to develop high quality whole-grain products. One of the lab’s doctoral students, Beth Econopouly, recently told The New York Times, “We’re working with hard, white wheats. Those are really great because they’re light in color, so people who are naturally averse to whole wheat are less aware of them.”

A lighter colored whole grain would certainly help address Haywood County Schools’ concerns that students won’t eat whole grain biscuits because they don’t “look like the biscuits that grandma has made them.”

Rather than waving the white flag in the school cafeteria, let’s start using strategies that we know already work – and keeping our eyes out for new ones—so we can run a victory lap around children’s health.

Lindsey Haynes-Maslow is an expert on the intersection between food systems, nutrition and public health, as well as the impact of government policies driving the food system. See Lindsey’s full bio.