Watch Out for the Hug Police at Kilmer Middle School 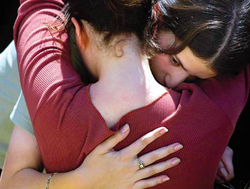 Forget Big Brother. He’s got nothing on the scary folks who run Kilmer Middle School in Vienna, West Virginia, where it’s against the rules for a kid to hug another kid.

Just ask 13-year-old Hal Beaulieu. He got in big trouble for slipping his arm around his girlfriend in the cafeteria. A hall monitor reported him to the principal. He was cited for two infractions: Leaving his assigned seat and hugging. A third offense could lead to suspension or detention.

His father, Henri, says the rule is ridiculous and un-American. It violates freedom of expression. He’s asked the local School Board to take a closer look at the policy. Hopefully, it will toss it out.

Hal just thinks “hugging is a good thing.” He told the Washington Post: “I think you should be able to shake hands, high-five and maybe a quick hug. Making out goes too far.”

Deborah Hernandez, the school’s principal, believes that a high-five can lead to much more serious things. According to her, pokes in the halls often become fights, and handshakes can be ways that gang members communicate. Then there are those troublesome girls who insist on holding hands or boys who pat their friends on the back.

It may be difficult for the average person to understand the connection between those pokes that lead to fist fights and holding hands or pats on the back, but not for Hernandez. In her mind, it’s all the same: “You have to have an absolute rule with students and wiggle room and good judgment on behalf of the staff.”

Laurie Baker, the head of the PTA, concurs with Hernandez. She feels that the no-touching policy is good, because it stops harassment and “inappropriate” touching. She also believes that the ever-popular high-five “gets out of hand” and definitely should be a no-no.

Hernandez and Baker get an F for being out of touch with the latest research on child development. Experts seem to agree that touching is essential for kids. As it is for adults. We are tactile creatures. To deny kids their right to horse around with each other or to show affection is to deny their humanity. What could possibly be wrong with two girls holding each other’s hand as they gossip in the hall, or a boy affectionately patting his buddy on the back or lightly punching him on the upper arm?

Hal Beaulieu wasn’t being violent to his girlfriend. He was doing what boys and girls have done since humans fell down from the trees. It’s logical that Kilmer Middle School would want to stop kids from giving each other bloody noses and broken limbs, but not hugs.

No one can be against a hug.