Was Mother Teresa an Agnostic? 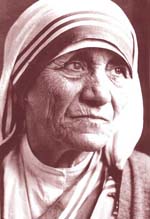 The world loved Mother Teresa, because she was everything that people expect in a Good Samaritan. She took care of the poor and sick, including people with AIDS, and never asked anything in return. She didn’t have a luxurious mansion like fundamentalist preachers do, she didn’t drive fancy cars (in fact she auctioned off the one the Pope sent her), and she didn’t wear expensive clothes.

When she died in 1997, then-Pope John Paul II rushed to start the canonization process, ignoring the usual five-year waiting period. There’s no doubt that Mother Teresa will end up a Catholic saint. For a church tarnished by all those priest sex scandals, the popular icon couldn’t be more of a godsend.

Behind the public image, however, Mother Teresa was apparently a troubled soul. The Macedonia-born nun, who spent nearly half a century ministering to the poor and downtrodden, had serious doubts about whether God, Jesus or even the human soul existed.

In a series of letters to several father confessors, recently published in Mother Teresa: Come Be My Light, she expressed those thoughts in ways that should make Agnostics happy. “When I try to raise my thoughts to Heaven,” she wrote, “there is such convicting emptiness that those very thoughts return like sharp knives and hurt my very soul. I am told God loves me, and yet the reality of darkness and coldness and emptiness is so great that nothing touches my soul.”

If only the woman who in her letters referred to Jesus as “the absent one” had acted on those feelings of disbelief and questioned outdated Catholic dogma, such as the prohibitions against abortion and contraception, which contribute to overpopulation and thus more economic hardship. If only she had denounced a Vatican that never lifts a finger to change the economic systems that keep people poor.

It’s not as if the diminutive Catholic nun didn’t wield tremendous political influence. She once visited former San Francisco Mayor Art Agnos at his home at night to demand that he show her an abandoned property that the City owned. She wanted to transform it into a homeless shelter. Mother Teresa could have insisted that Agnos turn all abandoned City properties into actual housing for homeless and poor folks.

Former New York City Mayor Rudolph Giuliani said that he would have given Mother Teresa anything. She got parking permits for her nuns’ cars. She never asked him for the kinds of reforms that would have made a real difference in the lives of the Big Apple’s impoverished, including a living wage, tougher controls on rents, and universal healthcare.

Mother Teresa wasn’t beyond lobbying for political issues she cared about. In 1994, she filed an amicus brief in a New Jersey anti-abortion case that reached the U.S. Supreme Court, and in 1996 opposed a referendum to legalize divorce in Ireland. She also hobnobbed with dictators, including Enver Hoxha in Albania and the Duvaliers in Haiti.

For a woman with such serious doubts about the very foundations of her religion, she sure didn’t hesitate to promote its right-wing agenda.