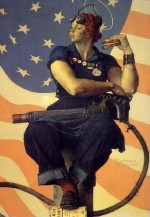 Wal-Mart heiress Alice Walton, the ninth richest person in the world, opens her Crystal Bridges Museum of American Art in Bentonville, Arkansas this Friday, November 11. The museum is double the size of the current Whitney Museum in New York City, and among the featured paintings is Norman Rockwell’s classic 1943 Rosie the Riveter. But as Walton promotes a painting that highlights the strength and tenacity of female workers, Wal-Mart offers workers a different reality. Wal-Mart announced in October that it was “substantially rolling back coverage for part-time workers and significantly raising premiums for many full-time staff.” In addition, those working less than 34 hours per week will no longer get health coverage for spouses. Alice Walton and her family have earned riches by denying workers adequate benefits and living wages. What the museum really needs is a large painting of a Wal-Mart worker suffering from unmet health problems, which could be titled “Walton Family Hypocrisy.”

If the Occupy movement needs a new target, the Alice Walton’s new museum offers a case study for what’s wrong with how wealth is distributed in the United States. A fraction of Walton’s $21 billion in assets could fund complete health care for all Wal-Mart employees, but the Walton family prefers to keep its workers in poverty so that it can indulge in ostentatious high-priced fantasies like the Crystal Bridges Museum.

Lives of the Superwealthy

In case you think that Walton has selfish motives for building an art museum in Bentonville, think again. She told the New York Times, “For years I’ve been thinking about what we could do as a family that could really make a difference in this part of the world. I thought this is something we desperately need, and what a difference it would have made were it here when I was growing up.”

Of course, another way she could have “made a difference” was by working with her other family members to ensure living wages and health care for Wal-Mart’s workers in Arkansas and elsewhere. Instead, she spent hundreds of millions acquiring American art and building a museum, which will be sustained by a recent $800 million gift from the Walton family foundation.

Walton’s purchase of Rockwell’s Rosie the Riveter perfectly captures both her ignorance and hypocrisy.

Wal-Mart has long been subject to charges of discriminating against women workers in wages and promotions, only averting a billion dollar nationwide class-action lawsuit through the intervention earlier this year by their political allies on the U.S. Supreme Court. Yet Alice Walton’s museum will now display a painting promoting women workers who were defense industry laborers paid much higher wages than those given the women of Wal-Mart.

The Walton family has likely done more to set back the wages and benefits of United States workers than any other family in the nation’s history. And now it is funding – through tax-deductible donations – a museum that is designed to bring cultural cache to a family that always puts maximizing profits first.

I don’t know if there is an Occupied Bentonville, but there certainly should be. What better way to demonstrate the hypocrisy of the super-rich, as well as the nation’s obscene distribution of wealth.

Randy Shaw is author of Beyond the Fields: Cesar Chavez, the UFW and the Struggle for Justice in the 21st Century.