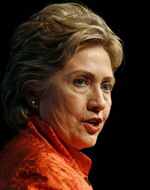 It’s been over a week since the Yearly Kos Convention, where Hillary Clinton said she’d keep taking money from lobbyists, that we are safer than on 9/11, and she fumbled my question about her husband’s legacy. Her lobbyist comment was the most damaging, as her Rasmussen poll numbers steadily declined for the next four days after the Convention. Her support for NAFTA and the Defense of Marriage Act have played a role in the campaign over the past week, putting Clinton on the defensive that could end up being a turning point in the race. But change will only happen if bloggers – and the other campaigns – seize on this opportunity because we know that the mainstream media will not do its job. With five months to go before the Iowa Caucus, there is still time for voters to learn the truth.

The case against Hillary’s Presidential nomination is even stronger when you consider questions about how she will fare in a general election. She is probably the first centrist presidential candidate in three decades who is less electable than her progressive challengers, which should lead primary voters to wonder why they would even want her to be the party’s nominee. After Democrats have settled for 30 years with the most moderate candidate every four years for the sake of electability, 2008 offers a unique opportunity to nominate someone who the party base can truly get excited about.

It is one thing for Hillary to make statements that alienate the progressive base of the Democratic Party. But her refusal to stop taking money from lobbyists because they “represent real people” will hurt her chances across the political spectrum. Scott Rasmussen took a poll after her comments at Yearly Kos, and found that only 24% of voters believe that she cannot be influenced by lobbyists. When asked if they agree with her that a lot of lobbyists “represent real Americans,” only 12% said “yes” while 71% said “no.” This won’t just hurt her in the primary; it could be devastating in the general election.

Since the Yearly Kos forum on August 4th, the Democratic Presidential candidates have had two more debates – an AFL-CIO debate on August 6th that focused on labor issues, and a Human Rights Campaign forum on August 9th that prioritized LGBT concerns. In both sessions, Hillary was again put on the defensive for her husband’s legacy – as Bill Clinton betrayed labor unions on NAFTA, and sold out the LGBT community with the Defense of Marriage Act after having been their champion in 1992.

At the labor forum, Hillary conceded that NAFTA as implemented “has hurt a lot of American workers, so we have to have a broad reform in how we approach trade.” But more revealing was her position on fast-track – “I don’t want to give fast-track authority to this president” – when it was her husband who pushed for this policy in 1997. And while she probably dodged a bullet at that debate regarding NAFTA, it has allowed John Edwards and others to aggressively stress this issue on the campaign trail.

Hillary’s problems with the LGBT community were on full alert at the Human Rights Campaign debate – an arena where she has cultivated strong support and contributions. Lesbian rocker Melissa Etheridge asked her a tough question about her husband’s legacy, as Etheridge said gays were “thrown under the bus” during the Clinton years after “all the great promises that were made to us.” Hillary’s response – “I don’t see it the way you describe that” – showed an insensitivity to the real sense of betrayal that queers have felt. And while Hillary’s stance on marriage equality is really no different from Barack Obama, the fundamental question will be about trust – who’s going to sell us out when it’s expedient?

The worst part of Hillary’s answer to my question at Yearly Kos was about the Telecommunications Act, where she said, “I don’t know, ask Al Gore.” Some have noted how rare it was for Clinton to plead ignorance on a policy question. But she really had no excuse, given that the law in question allowed Rupert Murdoch and others to consolidate their media empire, and how in the process she has made peace with Murdoch. The fact that Murdoch hosted a fundraiser for Hillary can come back to haunt her, especially with Edwards blasting the Australian tycoon’s recent purchase of the Wall Street Journal.

It’s not unusual for Democratic candidates to take positions that progressives find distasteful – only to later get their support under the guise of “electability.” For 35 years, Democrats have been haunted by the ghost of George McGovern – the last progressive nominee who lost every state except Massachusetts. We must not elect a progressive, we’ve been told, or else they will certainly lose to a Republican. For over a generation, party activists have been told to bite their tongue when their candidates say such things – because only a “moderate” can help us win the White House.

But here’s the kicker. Hillary Clinton is not only the most anti-progressive Democrat running for President. As my boss Randy Shaw pointed out, she is less electable than John Edwards and Barack Obama. According to Rasmussen’s general election match-ups, Obama and Edwards would beat any of the major Republican candidates, whereas Clinton would narrowly lose to Rudy Giuliani or Fred Thompson.

It’s one thing that a conservative Democratic candidate is unpopular among progressive activists like myself in San Francisco. But Clinton is even more unpopular among conservatives in the “red-states,” where the Democratic Party is hoping to expand its base. Congressional candidates and state party chairs in those parts are openly nervous that she will be a drag on the Democratic ticket – hurting the party label precisely where it needs a boost.

The chairman of a Midwest state party (who wished to remain anonymous) called Clinton a “nightmare” for congressional and state legislative candidates because of the drag she would be on the ticket. “The argument with Hillary right now in some of these red states is she’s so damn unpopular,” said Andy Arnold, chairman of the Greenville, S.C., Democratic Party. “I think Hillary is someone who could drive folks on the other side out to vote who otherwise wouldn’t.”

More ominous for Clinton is her almost universal name-recognition, but high unfavorable ratings – which consistently hover in the 48-49% range. This is particularly scary when you consider that no negative campaign against her has yet been waged. Voters have essentially made up their minds about Hillary, so there really is no way for her to go in the polls but down. It’s hard to change the pre-conceived notions people have about known quantities. Edwards and Obama, on the other hand, are still relatively unknown.

But Democratic voters – who will decide whether she becomes the nominee – don’t yet understand how unelectable she is. CNN recently asked 458 registered Democrats who they thought had the best chance of getting elected President, and in that poll Hillary easily beat Obama and Edwards. But registered Democrats don’t have the final say as to who becomes President. That will be resolved by all voters – including Republicans.

“If Democratic voters pick experience,” said pollster Mark Blumenthal at the Yearly Kos Convention, “Hillary Clinton will win. But if they pick trust as the most important issue, she could lose.” Right now, Hillary’s lead is in part due to her higher familiarity, as low-information voters who don’t know Obama or Edwards assume that they simply lack the experience to be President of the United States. What they need to be reached about is Hillary’s anti-progressive legacy – which raises the question of whether you can trust her to be a strong Democrat.

But electability also has to play a factor – and despite what the polls say, and what we’re hearing from Democrats in the red states – Democratic voters have not dogged Clinton with the question of whether she could win. As pollster Stan Greenberg said at Yearly Kos, the specter of “electability” can make or break a candidate – the way it destroyed Howard Dean’s candidacy practically overnight. “Iowa voters tend to be very pragmatic,” said Greenberg, “and these things can change very quickly.”

So there’s still time for these dynamics to change so that Hillary does not win the nomination. In the meantime, progressives will have to remind Democratic primary voters three basic problems about Hillary: (a) she’s not progressive, (b) she can’t be trusted, and (c) she can’t win the general election, or at least will face tougher odds than the others. What we know, however, is that we can’t just wait for the mainstream media to pick up on these points. It’s something that the liberal blogosphere – as well as the Obama and Edwards campaigns – will have to talk about themselves.