Von Trier’s “Antichrist” Shocks, But Fails to Move Us 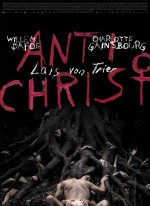 Lars von Trier’s Dancer in the Dark is a masterpiece I never want to see again. The Björk-starring anti-musical is as emotionally devastating as movies get. His Breaking the Waves, which introduced the world to Emily Watson, is similarly affecting. Though I’ve yet to see Dogville or Manderlay — the first two chapters of von Trier’s proposed “America” trilogy — friends have assured me that they are thoughtful, accomplished pieces of art. The director’s Antichrist, by contrast, feels like an empty provocation — a calculated attempt to shock in a post-reality-TV, post-torture society. Von Trier presents unbelievably gruesome images in graphic, clinical close-up as a commentary on … what? Man’s inhumanity to man? Man’s inhumanity to woman? The hordes lining up to see Saw VI at the multiplex this weekend?

Antichrist stars Willem Dafoe and Charlotte Gainsbourg, who took the Best Actress award at the Cannes Film Festival for her performance. The film manipulatively opens with their passionate lovemaking indirectly leading to tragedy. The scene, pretentiously shot in black-and-white and scored to Handel, plays like a film-school exercise (“Compose a scene in chiaroscuro, using a song in the public domain”).

Dafoe and Gainsbourg (never given names in the script), escape to their private hideout, a sanctuary in the woods known as — what else? — Eden. Gainsbourg flushes her antidepressants down the toilet, believing that Dafoe can assuage her grief. He’s a therapist, and while he agrees “in principle” with the tenet of never treating one’s family, the temptation proves too difficult to resist.

Until this point, the events of the film, while improbable, at least function on a dramatic level. But what transpires in the woods hardly lives up to von Trier’s reputation for emotional laceration. If, as Roger Ebert writes, he “subjects her to probing questions and the discussion of the Meaning of It All, which must affect her like a needle stab to an inflamed tooth,” I must have missed that part. I kept waiting for Dafoe to accuse Gainsbourg of being a bad mother, or at least an inattentive one. But the interaction at the small cottage is not nearly as brutal as Selma (Björk)’s trial in Dancer in the Dark, or Bess (Emily Watson)’s series of sacrifices in Breaking the Waves.

Then Dafoe finds curious photographs of his wife and son. They suggest negligence and mental illness (at best) and child abuse (at worst). Finally, the drama is brought to a full boil. But that’s when the Grand Guignol begins. Gainsbourg does things to her genitals — and to Dafoe’s — that echo ancient Egypt and Rome, respectively. Dafoe barely gets to confront Gainsbourg over his discovery, which feels like it could have been the crux of the film. For a director of von Trier’s talent and humanity, such a weak second act is unforgivable.

About those notorious scenes: If I described them in greater detail, you could imagine them. And if you can imagine them, they lose a great deal of their power in the story. Entertainment Weekly’s Owen Gleiberman suggests that “von Trier has made it his mission to shock the bourgeoisie in an era when they can no longer be shocked,” but he’s only half-right. Scenes of torture can no longer shock us. Modern special effects have taken us to a realm where any depravity we can imagine can be simulated onscreen. But I have to believe that we can be shocked by emotional cruelty — otherwise, what’s the point? And sadly, that’s the level on which Antichrist fails to shock.

With nearly every film he’s done, von Trier has been accused on misogyny. As a man, I’m not terribly interested in commenting on that, other than to note that the line “A crying woman is a scheming woman” (uttered, surprisingly, by Gainsbourg) is sadly underdeveloped. The New Yorker’s Anthony Lane would love to see von Trier make a PG-rated family film; I’d love to see von Trier tackle a film about homosexuality. Could he do it? Not all human relationships can be broken into male/female archetypes, after all.

Gainsbourg’s performance has been lauded in most circles, starting with the Cannes award, and it feels churlish to suggest that the praise is a tad undeserved. After all, possibly no other actress has been required to simulate onscreen what Gainsbourg simulates here. But we don’t give awards to Saw’s Shawnee Smith for her stomach-churning actions. In the theatrical canon, hysteria has to be one of the more easily accessible emotions. It makes me wonder if Gainsbourg could have found the depth in her character had von Trier’s script required her to do so.

Dafoe’s therapist remains even more of a blank slate. Minimizing the characters’ idiosyncrasies — even stripping them of their names — in a stab at universality is certainly a conscious choice of von Trier’s. But is it effective? I wouldn’t have cared less about Gainsbourg’s character if her name were, for example, Charlotte. But I might have cared more. And she still could have stood in for centuries of female oppression, her individuality causing the injustices to resonate even more.

And then there’s the talking fox. I’ve yet to read a review of Antichrist that doesn’t mention this moment, and this one isn’t going to be the first. Yes, a fox speaks to Dafoe — a dead fox, at that (does that make the scene more or less surreal?). It tells him, “Chaos reigns.” Having waited almost two-thirds of the film to hear this, I didn’t giggle like many others in the audience. I was, however, disappointed to hear the deep, guttural tones emerging from the fox’s mouth.

Come on, man. If you’re going to give us satanic animals, at least give us some interesting satanic animals. Somehow, I feel the fox would have been scarier if it had spoken in Tyler Perry’s voice. (All kidding aside, if von Trier is interested in subverting horror-movie tropes — and this scene suggests he is — one at least expects him to go all the way.)

There’s a scene near the end of Antichrist that may call into question the events that transpired in the prologue, or at least Gainsbourg’s participation in them. I’ll admit I didn’t catch the significance of the moment until my companion mentioned it afterward. If his interpretation is correct, this redeems the film, but only somewhat. Some might argue that this very ambiguity is what makes the film great. But if the shot really contains the revelation my friend believes it does, von Trier’s pay-off in the final scene is frustratingly
weak. And the final title card, dedicating the film to the late, great Andrei Tartovsky, is just a bad idea. Telegraphing his chief influence feels both patronizing (did he not expect us to make the connection?) and self-defeating, as if von Trier couldn’t trust the film to make the case for itself. (Though I prefer it to the tidy poem that concludes Dancer in the Dark —that film’s one flaw.)

Until most critics, I didn’t love or hate Antichrist. It feels weird to suggest such a controversial film of playing it safe, but in this case, I’m just not sure the graphic images lead to an emotional catharsis. The only thing I do know is that von Trier remains a director to watch, even with this minor contribution to his canon.