Voices of a People’s History of the United States, by Howard Zinn and Anthony Arnove 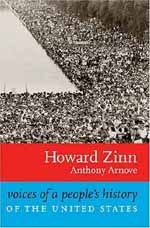 Ater seeing Howard Zinn on John Stewart’s “The Daily Show” not long ago, I just knew I had to get my hands on the follow up to his “A People’s History of the United States”, the book in which he presented alternative versions of American milestones, including Columbus’s “discovery” of the New World. In Voices, Zinn picks up where People’s History left off, by turning the platform over to other voices, in a collection of first-hand accounts, journal entries, speeches, personal letters, and published opinion pieces from the nation’s history.

For Voices, authors Zinn and Anthony Arnove have selected testimonies to living history-speeches, letters, poems, songs-left by the people who make history happen, but who usually are underrepresented or misrepresented in history books: women, Native Americans, workers, blacks and Latinos. Zinn has written short introductions to the texts, which themselves range in length from letters or poems of less than a page to entire speeches and essays that run several pages and longer. Voices of a People’s History has been described as, “a symphony of our nation’s original voices, rich in ideas and actions, an embodiment of the power of civil disobedience and dissent, wherein lies our nation’s true spirit of defiance and resilience.”

Many of Zinn’s works, Voices included, is to “engage in an act of political dissidence and activism”. “What is common to all of these voices,” Zinn and co-editor Anthony Arnove write in the book’s introduction, “is that they have mostly been shut out of the orthodox histories, the major media, the standard textbooks, the controlled culture … to create a passive citizenry.” With Voices, Zinn and Arnove seek to address that malaise, showing that the impossible–slaves rising up against their slave masters, for example–is not only possible, but has occurred repeatedly throughout the country’s history. “Whenever injustices have been remedied, wars halted, women and blacks and Native Americans given their due,” they write, “it has been because ‘unimportant’ people spoke up, organized, protested, and brought democracy alive.” The common thread throughout Voices is this mandate, and each selection is preceded by a brief introduction by the authors, written from a far-left perspective. One chapter is actually entitled “The Carter-Reagan-Bush Consensus.”

Zinn’s early chapters on Columbus, slavery, the War of Independence, and the early women’s movement, are to me, just as engaging as later excerpts, largely because a contrary point of view to mainstream mythology has been so rarely heard. Frederick Douglass, George Jackson, Chief Joseph, Martin Luther King Jr., Plough Jogger, Sacco and Vanzetti, Patti Smith, Bruce Springsteen, Mark Twain, and Malcolm X, are just a few of the hundreds of “voices” appearing in the book. The later chapters do tend to have that, “greatest hits of the left” feel, as the book juxtaposes an Abbie Hoffman speech, to the lyrics of Public Enemy’s “Fight the Power”, and a speech by Danny Glover, to an excerpt from W.E.B. DuBois’s The Souls of Black Folk. For context and background, the original People’s History, is second to none, but to hear the words right from the speakers’ mouths, really makes Voices unique.

Zinn recounts Muhammad Ali’s famous speech, the one where he refuses to fight in the Vietnam War and announces, “I have nothing to lose by standing up for my beliefs. So I’ll go to jail. We’ve been in jail for 400 years.” Ali wasn’t just making a powerful stand against US imperialism; it was a call to arms. Likewise, testimonies from black GIs in Vietnam that remind us that once again America’s poor, white, black and Latino working classes are being asked to do their masters’ dirty work in Iraq, and just like in Vietnam they will also be doing the dying.

This book doesn’t just speak out against the horrors of the system. It also gives a voice to those who organised the resistance against the rich and powerful, like the Wobblies, the Student Non Violent Coordinating Committee, and the activists in the CIO trade unions.

At a time when the right wing are gloating at the victory of George Bush and many believe that the working class in the US is nothing but a footnote, this book is also a useful reminder that there is a rich tradition of struggle and resistance. One of the speeches published in this book, were spoken by Martin Luther King 38 years ago, and the questions he asked, still need answering today…

“Voices” shows a different side to the US, and one that the media rarely shows us, an inspirational one, and one of hope and resistance.

Anthony Arnove is the editor of Terrorism and War by Howard Zinn, and Iraq Under Siege. An activist and regular contributor to ZNet, his writing has appeared in The Nation, The Financial Times and Mother Jones. He lives in Brooklyn, New York.