Villaraigosa: How He Won and What Progressives Can Expect 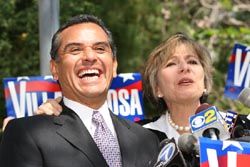 “If there are radicals out there who expect him to govern as a radical, then they are going to be very disappointed”
-Peter Dreier, Co-Director, Progressive LA

If you are looking for insight into Los Angeles’ new Mayor, consider this: he was born Antonio Villar but added his wife’s last name-Raigosa-to his own when they married in 1987.

Few men change their names when they get married. And when I asked longtime Chicano activist Richard Marquez if he had even heard of any Chicano male taking up his wife’s name, he said it was extremely rare.

Villaraigosa grew up poor, fatherless, and with no connections that could boost his ambitions. Unlike incumbent Mayor James Hahn, whose career was built on his father’s fifty years in political office, Villaraigosa lifted himself up by his bootstraps and could be said to personify the American Dream.

In 2001, Villaraigosa mobilized his Latino-labor-left base and finished first in the general election. But the runoff proved that his core constituency did not represent an electoral majority, and with Hahn getting over 80% of the black vote due to his father’s legacy, Villaraigosa was defeated.

Villaraigosa faced a strategic choice as he pondered the 2005 campaign. He could either try to mobilize his base to the extent that it would comprise an electoral majority, or he could actively court moderate voters.

Under the campaign leadership of longtime San Franciscan and political moderate Ace Smith, Villaraigosa chose the latter course. I believe he would have chosen this course even if the Los Angeles Labor Federation were not committed to endorsing Hahn, though this anticipated endorsement certainly bolstered Smith’s case that winning moderates was the key to victory.

In courting moderate voters, Villaraigosa started with a key advantage: he had a history of treating those who disagreed with him with respect. This is a trait that also proved instrumental for Matt Gonzalez in his 2003 mayoral campaign; it was Gonzalez who fostered a close relationship with conservative former Supervisor Tony Hall despite their ideological differences.

While activists are obsessed with a candidate’s stance on a laundry list of issues, many voters are satisfied that a candidate is open to hearing their views. Matt Gonzalez used this to his benefit in 2003, and no progressive can become Mayor of San Francisco without creating a comfort level among moderate voters.

Thus, while both Villaraigosa and Hahn opposed a ballot measure that would have allowed the San Fernando Valley secede from Los Angeles, Valley voters did not turn against Villaraigosa as they did Hahn. In fact, key Valley leaders ended up endorsing Villaraigosa because they respected his integrity and believed he would listen to them even if he ultimately did not agree with their position.

Villaraigosa’s support from development interests associated with former Mayor Riordan, his pledge to add 1000 police officers, and his commitment to be a “pro-business” mayor makes some progressives nervous. But these positions helped bring him a sweeping victory, and this holier than thou attitude—widespread in San Francisco-limits progressive electoral success.

The willingness of some progressives to attack progressive candidates who divert from the left “line” on any issue has reached absurd proportions; consider that Matt Gonzalez was criticized in a book about his campaign for not promoting a platform on the environment (which he did in fact have).

Villaraigosa spent far less on his winning mayoral campaign than Gavin Newsom spent in our much smaller city. But with labor funding going to Hahn, limiting his campaign donations to progressive sources would have deprived Villaraigosa of the resources necessary to even make the runoff, and likely denied him victory..

Progressive activists in Los Angeles are less anti-development than those in San Francisco because its heavily Latino and labor unions are the dominant power on the Los Angeles left. Job creation is a much higher priority in Los Angeles, and progressive interests are dependent on development to provide funding for affordable housing and a continually at-risk system of public services.

For example, Los Angeles activists won the creation of a $100 million Housing Trust Fund, but the city was unable to provide even half of this funding. Given federal cutbacks in housing, inclusionary housing payments from developers is increasingly critical to Los Angeles addressing its affordable housing shortage.

But Villaraigosa is not so committed to development that he signs on to even bad projects. A key factor in Hahn winning labor’s endorsement was his support for an $11 billion expansion/modernization of the Los Angeles airport; Villaraigosa opposes the project.

Although the Latino Eastside had the strongest turnout on Tuesday (and gave 84% support to Villaraigosa), Los Angeles does not have the progressive electoral base of San Francisco. That means Villaraigosa cannot govern as if he were Mayor of nearby Santa Monica, where progressive voters are the largest electoral grouping.

This is a terrible time to be mayor of a major city, as the Bush Administration is cutting already inadequate federal funding for housing, health, transit and other public services. California mayors are even worse off, as Props 13 and 218 make raising revenue through assessment districts or new taxes extremely difficult.

So as Peter Dreier notes at the top, expect Villaraigosa to follow the example of Brazil’s Lula, rather than govern from the left. While some progressives are disenchanted with Lula’s conservative fiscal policies, his commitment to putting Brazil on a long term path to prosperity is a smart strategy for ensuring that the Workers Party is not quickly thrown out of office due to a financial crisis.

If Villaraigosa builds the Los Angeles economy, makes Valley residents feel part of the city, does something to get people feeling better about the school system (the Mayor currently has no role in schools but he wants to change this), and keeps his backers in Progressive LA happy by reaping more benefits from development and helping unions grow, then four years from now he will have turned Los Angeles into a national model of progressive governance.

It’s enough to make us Bay Area progressives a little jealous of our allies down south, but they do have to live in Los Angeles.