Victor Wooten Returns to the Fillmore 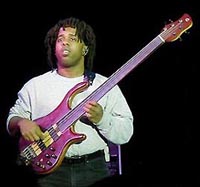 I first saw the world renowned bassist Victor Wooten in 1996, and actually got to spend time with him during his tour with Bela Fleck in 2000. What struck me most was not just his unbelievable talent, but his utter joy in playing the bass, and a genuine sense of humility; Wooten truly redefines the word musician. Regaled as the most influential bassist since Jaco Pastorius, Wooten is known for his solo recordings and tours, and as a member of the Grammy-winning supergroup, Bela Fleck & The Flecktones. He is an innovator on the bass guitar, as well as a talented composer, arranger, producer, vocalist and multi-instrumentalist. But those gifts only begin to tell the tale of this Tennessee titan. On May 4th, he and his band will return to the Fillmore, in what can only be described as another “don’t miss this” performance.

Wooten is the loving husband and devoted father of four; the youngest sibling of the amazing Wooten brothers (Regi, Roy aka “Futureman”, Rudy and Joseph), and the bassist in their famed family band; the student in the martial art of Wing Chun and the nature survival skill of Tracking; the teacher of dozens of bass players at his acclaimed annual Bass & Nature camp; and the master magician.

Wooten got to music early, growing up in a military family in which his older brothers all played and sang. By the time he was 3, Victor was being taught bass by his oldest brother Regi, and at age 5 he was performing professionally with the Wooten Brothers Band. He recalls, “My parents and brothers were the foundation. They prepared me for anything by teaching me to keep my mind open and learn to adapt.” Working their way east from Sacramento, the band played countless clubs and eventually opened concerts for Curtis Mayfield and War.

Wooten was influenced by bass mentors, Stanley Clarke, Larry Graham and Bootsy Collins, while learning about the music business at a wildly accelerated pace. By the early ’80s, with the family settled in Newport News, Virginia, the brothers became mainstays at Busch Gardens theme park in nearby Williamsburg, making numerous connections with musicians in Nashville and New York.

In 1988 Wooten moved to Nashville, where he worked with singer Jonell Mosser and met New Grass Revival banjo ace Bela Fleck. A year later, Fleck enlisted Vic, his brother Roy (a.k.a. Future Man) and harmonica-playing keyboardist Howard Levy to perform with him, and the Flecktones were born. After three highly successful albums, Levy departed in 1993, and the band’s new trio format enabled Victor to develop and display a staggering array of fingerboard skills that turned him into a bass hero of Pastorian-proportions and helped earn the band a Grammy.

With the Flecktones in full flight, Wooten set his sights on a solo career, first forming Bass Extremes with fellow low-end lord Steve Bailey (leading to an instructional book/CD and two CDs, to date), and finally releasing his critically-acclaimed solo debut, A Show of Hands, in 1996. Soon after, Vic took his solo show on the road with drummer J.D. Blair. Momentum and accolades built with successive tours and the release of What Did He Say? in 1997, the Grammy-nominated Yin-Yang in 1999 and the double CD, Live In America in 2001.

Fresh off sold-out tours with the Flecktones and Bass Extremes (with Bailey, Watson and Oteil Burbridge) in 2004, Victor is re-focusing on his solo side in 2005 thanks to a remarkable new CD, his Vanguard Records debut, Soul Circus. A three-ring affair, the disc boasts such guests as the Wooten brothers, Bootsy Collins, Arrested Development rapper/vocalist Speech, Howard Levy, Dennis Chambers, Saundra Williams, J.D. Blair, Derico Watson, Flecktone Jeff Coffin, and a who’s-who of bassists, including Bailey, Burbridge, Will Lee, Rhonda Smith, Christian McBride, T.M. Stevens, Bill Dickens and Gary Grainger.

On Soul Circus, Wooten performed his usual high-wire act on a bevy of basses, but the real ringmaster was his collection of songs: The poignant “Prayer” and Prince-charged flipside “Natives” provide a thought-provoking look at our native Americans. The epic “Bass Tribute” pays homage to great thumpers past and present. “On and On” is an instant soul classic. “Cell Phone” makes a chuckle-filled, cutting-edge connection. “Higher Law” stands as a stadium-ready, rock-funk protest anthem in the best Sly Stone tradition. “Back to India” currys up simmering musical flavors. And the hip hop/jazz title track marks the sonic coming-out of the long-rumored eight-armed character seen on the CD’s cover and in the liner notes: “Yes, Virginia (and the rest of the world), there is a funktopus!”

Victor Wooten has the rare ability to continuously raise the bar, always growing as an artist, and taking us to new heights. His last visit through the Bay Area was in Santa Rosa with the Flecktones; don’t miss another chance to see him when he comes to the Fillmore.


E. “Doc” Smith is a musician and recording engineer who has worked with the likes of Brian Eno, Madonna, Warren Zevon, Mickey Hart, Jimmy Cliff, Paul McCandless, Jack DeJohnette and Bon Lozaga. He is also the inventor of the musical instrument, the Drummstick. He can be reached at http://myspace.com/edoctorsmith