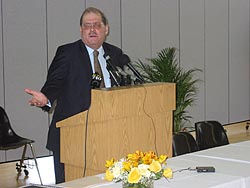 Venezuela’s President Hugo Chavez is not a popular figure in the United States, even among many progressives. Chavez is bombastic, arrogant, and does not hesitate to speak the truth about the Bush Administration. Even worse from U.S. media standards, he speaks powerfully of problems of poverty and inequality, two issues that do not exactly spark excitement among corporate advertisers. Venezuelan Ambassador Bernardo Alvarez Herrera was in San Francisco yesterday as part of a nationwide tour to increase U.S. understanding of his nation. Alvarez raised many important issues, including the Bush Administration’s refusal to extradite terrorist Luis Posada Carilles, who has admitted blowing up a Cuban airliner in 1973, killing 73 people. Despite George W. Bush’s claim to be waging a vigorous “war on terror,” much of the world agrees that the U.S. protection of Carilles represents a “double standard” in its approach to terrorism.

Bill Moyer’s recent PBS show on the U.S. media’s parroting of Bush Administration lies about Iraq could just as easily have been about Venezuela. Both the New York Times and Washington Post are routinely spreading negative disinformation about Hugo Chavez and Venezuela, and even have many progressives fooled.

Chavez’s “problem” is that he makes the Bush Administration look bad by insisting that low-income working people should get a greater share of resources. Our nation has taken the opposite approach, enacting policies that make the rich wealthier and the poor more destitute.

Chavez’s propensity to make grandiose statements about world affairs, his reaching out to Iran, and his holding a well-attended anti-Bush rally in Buenos Aires to protest our President’s visit has led even progressives to criticize him for being unduly provocative.
But only someone with Chavez’s large ego would have had the confidence to take on the challenge of first overthrowing, and then outpolling, the Venezuelan ruling elite responsible for the nation’s enormous economic disparities.

And it takes someone with a large ego to take the dramatic steps necessary to improve the lives of Venezuela’s poor now, not in a decade or generation.

Chavez’s efforts to steer a far greater share of his nation’s increased oil revenue to the poor is framed by the New York Times as a sort of populist “scam.” A President who has won more honest and fair elections than George W. Bush is deemed a “strongman,” while his preventing foreign companies from reaping huge profits from Venezuela’s natural resources is described as akin to Soviet-style Communism (Rarely are there stories about Venezuela’s robust private sector).

It is easy to fool Americans about foreign affairs, because most lack personal knowledge of the facts and are completely dependent on the media. American ignorance about the history of countries like Vietnam, Iraq, or Venezuela created the perfect opportunity for manipulating and/or inventing facts with impunity.

The Ambassador noted the inaccurate U.S. news coverage of his country while speaking in San Francisco yesterday, and said he and other government officials try their best to correct reporters’ errors. But he conceded that reporters like Simon Romero of the New York Times “have made many mistakes,” and tend to write whatever they want about his nation regardless of the facts.

For example, a major issue in Venezuela is the harboring of Luis Posada Carilles, a terrorist who blew up a plane killing 73 Cubans in 1976. Prior to 9/11, this was the largest terrorist bombing of an aircraft.

Because Posada was in Venezuela when he planned the bombing, a 1922 treaty requires his extradition from the United States. But the Bush Administration refuses to do so, and is protecting the terrorist from prosecution.

The reason? The Bush Administration claims that Posada cannot go back to Venezuela because of a likelihood he would face torture.

That is not a misprint or joke. An administration that maintained torture chambers in Guantanamo and Abu Ghraib, and sends prisoners abroad to be tortured, wants the world to believe that it must protect a terrorist from torture.

Are prisoners tortured in Chavez’s Venezuela? No credible nongovernmental body has made such a finding. And as the Ambassador put it, “hundreds of people wake up every day trying to find violations of human rights in Venezuela. If they had found anything, the world would know about it.”

Do not expect to find much discussion of America’s “double standard” toward terrorism in the mainstream press.

First, he said that the 2006 elections in Latin America showed that Chavez’s victories were no accident, and that there is a huge socioeconomic transformation of the region now underway.

Second, he said that the world must reassess its approach to energy. According to Alvarez, the United States has been preaching a model of increased consumption to developing countries that, if followed, would require an energy capability of six planets. Such a model is economically unobtainable, and environmentally unsustainable.

In a discussion that would make local public transit advocates happy, he also called for a “global conversation” about private vs. public transit. Alvarez described the continued building of suburbs and highways as creating a “dead end street,” showing that the Chavez Administration’s energy policy is light years ahead of America.

Whereas ethanol made from corn has become a politically popular alternative fuel, and has been embraced by midwestern politicians, Alvarez argued that we should “use food to feed people, not cars.”

Alvarez’s presentation showed that Chavez Administration values have a lot in common with policies promoted by progressives in the United States. Yet the media has so scared Democrats about Chavez that even Harlem Congress member Charles Rangel, whose constituents get discount home heating oil from Venezuela, speaks of the need for America to wean itself from dependence on unstable countries like Venezuela.

Hugo Chavez provides an ongoing reminder of America’s distorted priorities. In other words, he makes the U.S. government look selfish, uncaring, and even malicious toward the tens of millions of living in property in the world’s richest country.

No wonder our media regularly attacks him. The last message corporate America wants voters to hear is that it is possible to radically change economic policies to benefit the poor, and that populism has seven letters but is not a dirty word.