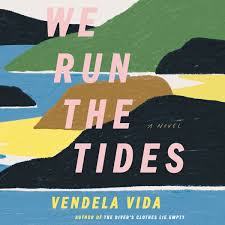 A native San Franciscan, Vendela Vida’s contributions to the city include co-founding the wonderful children’s writing center, 826 Valencia. Her new book, We Run the Tides, brings you straight into the Sea Cliff Neighborhood and San Francisco in the mid-1980’s. It’s an entrancing read.

Vida portrays a much more carefree San Francisco. It was a time without cell phones and social media. The books heroine reflects that time, but themes of friendship, first crushes, adolescence trails, and bullying relates to today.

Vida dives straight in to the main character’s, Eulabee, life. She’s a girl that seemingly has it all. She has a crew of friends, full roam of the Sea Cliff neighborhood, a loving family, and attends an esteemed private school.  But as the story unfolds the façade of a perfect childhood breaks down.

The book is narrated by Eulabee who is approaching fourteen. She attends Spragg school for girls and has 3 close friends, Maria Fabiola, Julia, and Faith. All play an essential role in how the plot unfolds. The four start out thick as thieves with power in the Sea Cliff community. They know all about their neighbors, where the cute boys live, the gardeners, and China Beach.

Maria Fabiola, Eulabee’s best friend as the book starts out, is beautiful and comes from money;  she is an IT girl. She is also the character that stirs the pot and thickens the stories  emotionally and physically. The first sign of trouble is when during one of the standard walks to school a man in a car asks for the time. Maria Fabiola says he was touching himself. Eulabee does not agree. This incident breaks down the friendship and Eulabee is then ostracized from the friend group and all the students at school. Now Eulabee has to go through adolescence alone, shattering the perfect childhood that started the book.  Maria Fabiola then becomes the center of the main plot climax when she disappears.

What unfolds next you’ll have to read and see.

Vida creates drama with in the characters’ lives and makes the book a non-stop read. I could not put the book down and read it in two days. Vida does a great job making the reader feel compassionate towards the main character; the reader roots for her success. The story oscillates between big dramas— a student going missing, a father committing suicide, inappropriate sexual encounters— to small dramas of the heroines first date with a boy, the narrator meeting with her English teacher, and visiting China Beach.

The small intimate moments help keep the book relatable and focused on the main characters feeling and emotions. The big plots push the book along ensuring that there is never a dull moment. The ending of the book fast forwards to when the heroine is older and wiser; seeing where the characters end up highlights the special years of childhood and adolescents.

Vida reminds us how the world can seem so big and vast and lives seem so important but that it really is just one time in a person’s life. If you are looking for a great read on the adolescent experience, We Run the Tides is for you.