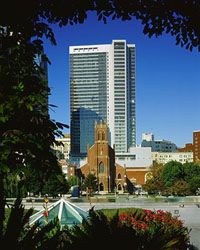 Tucked away in last Sunday’s Chronicle Real Estate section, in paragraph 22 of a 25 graph story, was acknowledgment that more than half of the owners of luxury condominiums in the city use their dwellings only on a part-time basis. Although the article cheers what it describes as a “Disneyland for the wealthy,” San Franciscans angry over Bush Administration policies tilting tax breaks to the rich should ask why the city treats these upscale pied de terre’s as if they were homes for the middle-class. With a 50 story luxury project at Rincon Hill coming before a Committee hearing on Wednesday, the Supervisors have a perfect opportunity to start making wealthy condo developers and buyers pay their fare share.

Chronicle columnist Carol Lloyd’s story on a wealthy couple who moved from a Pacific Heights home to a condo at the Four Seasons in downtown San Francisco (“Urban roots-return to city life”) was intended to show how luxury condos are “revitalizing” downtown San Francisco. But what her story actually revealed was the “shocking” reality that more than half of the owners at the Four Season are only part-time dwellers and that this is typical of other high-end developments.

A word of caution. Before anyone gets alarmed at the city approving view blocking highrises, and allocating increasingly scarce housing opportunity sites, for people whose primary homes are elsewhere, consider Lloyd’s conclusion that “urban planners” do not believe such housing will worsen San Francisco’s affordable housing crisis.

The planner cited by Lloyd is Jim Chappell, president of San Francisco Planning and Urban Research (typically known as SPUR). Chappell believes the arrival of part-time millionaire condo owners “is not a subtraction. It’s an addition. It’s good that these people bring their capital and energy and joie de vivre to the city.”

Unfortunately, upscale condos that function more as extended stay hotels than as opportunities for first-time homebuyers fail to address any aspect of the city’s housing crisis. By removing land from the housing market that would otherwise provide such opportunities, luxury housing owned by part-timers actually does make the city’s prospects for increasing middle-class homeownership much, much worse.

I typically support market-rate housing because in the absence of available supply, some of those seeking to become first-time homebuyers will achieve their ambition by evicting longterm tenants. But luxury housing does nothing to reduce tenant evictions. Those who buy a condo that is not their principle residence are not potential evictors, since evictions are only allowed if the property will be their primary residence.

According to Lloyd’s story, over half of those owners living in these forty and even fifty story towers would not meet the “primary residence” test.

Curiously, while nearly all San Francisco Supervisors, the Mayor, and State Representatives Leno and Migden support the proposals of the state and national Democratic Party to increase taxes on the wealthy, the city’s inclusionary housing law does not distinguish between the cost of the unit. The law addresses differences in square footage of units, but the presence of 360 degree views, doormen, Sub-Zero refrigerators, on-site dry cleaning and other amenities is irrelevant.

Under San Francisco’s regressive inclusionary housing law, a building whose forty one-bedroom units will sell for $600,000 pays the same 12% fee as 200 one-bedroom units in a luxury tower whose starting price is $1.6 million.

This makes no sense. The policy also encourages luxury housing, as developers can more easily accommodate the 12% requirement by the higher price and typically greater volume of such units.

In February 2004, Supervisor Chris Daly acted on the folly of city housing policy by demanding and winning a 25% inclusionary requirement for a 40story tower at Rincon Hill. At the time Daly’s move seemed a brilliant stroke for fairness. But as time has passed, the Supervisor himself realizes that the developer profits reaped by the historically unprecedented mammoth upzoning of height limits at Rincon demand far more.

To this end Daly will hopefully be joined by his colleagues in securing at least 35% inclusionary housing for the new 55 story Rincon Hill tower. The developer must also provide a community benefits package that provides at minimum relocation expenses and rent subsidies for the many families currently facing Ellis Act evictions as a consequence of living in the shadow of a “revitalized” neighborhood.

The strength of San Francisco is its vibrant neighborhoods. SPUR President Chappell may feel that it is enough for wealthy part-time owners to spend capital in the city, but neighborhoods involve human interaction more than the exchange of money.

Although both the Chronicle and Examiner repeatedly describe the upscale housing planned for Rincon Hill as creating a “dynamic neighborhood,” what is really being constructed in that waterfront area rich with potential is an intersection. And as a longtime political insider told me in describing Rincon, an intersection is not a neighborhood.

One would hope that anger over Bush’s trickle-down economic policies, and his reducing income tax levels of millionaires to that of those earning less than $100,000 (a fact detailed in today’s New York Times lead editorial), would motivate San Francisco politicians to implement policies that distinguish between the super-wealthy and the middle class.

The Mayor has not been heard from on the economic inequities of city requirements on luxury developments for non-resident owners. On Wednesday, some Supervisors will get their chance to remedy this injustice and the full Board can intervene to ensure fairness when the Rincon project comes before them in the coming weeks.

While luxury housing for part-time residents won’t alleviate the city’s housing crisis under any circumstances, securing millions more in contributions for affordable housing from these projects certainly will.