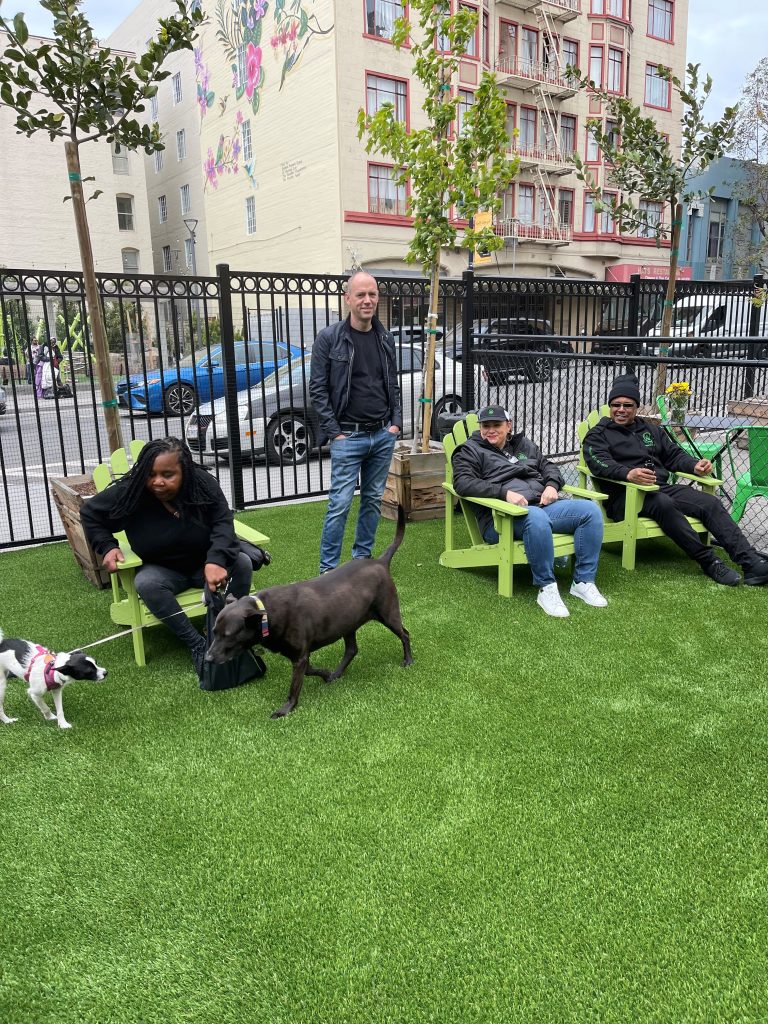 Building Community in the Tenderloin

Last Thursday, Urban Alchemy (UA) unveiled its latest success: the transformation of a run-down parking lot at Turk and Hyde into what they call an urban “oasis.” A site long filled with drug dealers  now features a dog park, a place for community members to play chess, checkers and other board games, and office space for a group that has become indispensable to the Tenderloin’s recovery.

What’s behind Urban Alchemy’s rapid growth and success? It’s based on a core belief in the ability of people with criminal backgrounds to turn their lives around and become assets to the communities they serve. It’s a remarkable vision that needs to be spread and replicated across the nation.

Lena Miller, UA’s Director, founded a nonprofit group called Hunters Point Family nearly two decades ago. She then spun off UA to provide cleaning and ambassador services for the city’s public toilet program, known as Pit Stop. UA then secured contracts to provide Ambassadors for the Civic Center and sidewalk cleaning in the Tenderloin.

UA now has over 1100 employees and operates in multiple cities. Miller is a true visionary and UA is in high demand.

Most people in San Francisco know UA for its staff working on Tenderloin and Mid-Market sidewalks. When UA comes to a block the drug dealers typically leave—and stay gone during UA’s 7am-7pm shift.

For all of its success, UA knows it cannot eliminate drug dealing on their own. The police have to be involved. Unlike UA staff, the police are armed and not limited in their hours of service or confined to designated blocks. So when you hear people say “why hasn’t UA stopped all open drug markets in the Tenderloin,” the answer is that nobody should expect UA to achieve this on their own.

The good news is that the SFPD has gone from skepticism about UA to embracing the group as a critical partner. Chief Scott, Deputy Chief Lazar and Tenderloin Captain Canning joined many other officers at last Thursday’s opening of the Oasis. The forging of a strategic relationship between the SFPD and UA is huge.

UA does far more than monitor sidewalks. UA is now part of the Tenderloin community. This relationship will now be further strengthened by the Oasis becoming akin to an outdoor community center.

Who is Urban Alchemy?

I had a chance to speak with some of UA’s key staff. Memo is a Director of Residential Services. He supervises the supervisors, creating the work schedules for UA’s over 800 San Francisco employees. Memo knows the drug world well, having served time in federal prison for conspiracy to distribute drugs. He joined UA soon after leaving prison in July 2020.

My staff and community members got to know Memo when he was working at Macaulay Park. He was part of a successful effort to end the heavy drug dealing in the area that was deterring families with kids from enjoying the park.

I asked Memo about how he perceived the Tenderloin drug scene when he began: “I’ve never seen nothing like this. Hyde and Turk and Hyde and Golden Gate were horrible.” He sees his community work as “rectifying the wrongs I did in my past. I started realizing I had to help people. We are professionals at this. UA has saved a lot of lives. Every day I get compliments from people about the positive difference we are making for the community.”

Memo sees the oasis at Hyde and Turk as a great way for UA to engage with the community.

Memo also raised an issue too often overlooked amidst the focus on UA’s work: it not only helps communities but “gives a second chance to a whole lot of people.” UA recruits from an ex-offender population that often has trouble getting jobs. So people are helping themselves as they improve the community.

Lorenzo Grant is a Deputy Director for UA. Grant also spent years in prison for selling drugs. Grant told me that he was under the control of the criminal justice system from the age of 16; he’s now 43 and joined UA in 2018.

Grant started working as staff to the Pitstop program. He then shifted to monitoring BART elevators. At each stop Grant showed his ability to handle more—he now joins Memo in scheduling worker shifts, finding replacements, ensuring time sheets are filled out and other tasks. Grant works at the Oasis and encourages residents to come by and say hello.

UA is understandably recognized for its incredibly successful work improving public safety on the streets where it works. I would estimate its support level in the Tenderloin at 99%.

But UA is also giving job opportunities to people whose criminal backgrounds makes it difficult to get employment. UA offers a second chance for those eager to secure good jobs.

I regularly talk to UA staff who I see on the sidewalk. I suggest others do the same. One man I spoke with had just gotten out of jail after a forty year sentence! He was so excited to have a job that he was looking for a second job as well—he told me he wanted to make up for lost time.

UA is promoting the Tenderloin’s revitalization. It is building community and  transforming lives. I know the Mayor and Board of Supervisors recognize their success—Matt Haney has been a big backer of the group and attended the Oasis opening—-and urge them to keep and even increase UA’s funding in the new budget year starting July 1.