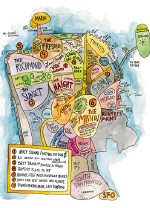 A poster of San Francisco neighborhoods is being widely marketed by bookstores and even SF MOMA despite obliterating the historic Uptown Tenderloin from the map. The poster, for sale in bookstores and even SF MOMA, includes nearly all of the city’s neighborhoods – including Portola, Mission Terrace, Balboa Terrace, Twin Peaks, Laurel Heights and Sea Cliff along with the bigger and better known Mission, Sunset and the Richmond. But the area North of Market Street that has comprised the Uptown Tenderloin neighborhood for over 100 years (well before the Sunset neighborhood was built), is identified as “Union Square.” The Uptown Tenderloin is obliterated by this map, which 7 x 7’s Executive Editor Robin Rinaldi says is “gorgeously rendered” and her “favorite cover of 7×7 ever.” The artist Wendy MacNaughton claims that the map “is how I see my San Francisco.” Her message and that of Rinaldi: we prefer to see a San Francisco where the Uptown Tenderloin and its residents do not exist.

Artists have the freedom to create politically incorrect works that may generate public outrage. But the question about a San Francisco map that obliterates one of the city’s most historic and ethnically diverse low-income neighborhoods is this: why are Green Apple Books, Alexander Books, Books Inc., Chronicle Books, and even SF MOMA promoting such a classist and historically ignorant product?

According to its website, 7×7 retained MacNaughton to “draw a ‘psychological map’ of SF neighborhoods” for the cover of its July 2010 issue. Not being a reader of 7 x7-which covers such hot topics as fashion, restaurants and the recipe for Tartine’s Morning Buns – I first saw the map last week when it was posted on the glass doors of Books, Inc. (also the entrance to Peets) in Opera Plaza.

Looking at the map, one would have no way of knowing it was a former magazine cover; it simply looks like Books, Inc. was selling a map of San Francisco neighborhoods for $24.95.

Inspecting the map, it becomes clear that no other neighborhood other than the Uptown Tenderloin is both excluded and “covered over” by a separate neighborhood – in this case, Union Square. Do MacNaughton and the businesses promoting her map really believe that Union Square starts west of Mason Street at Market Street?

San Francisco’s gay and lesbian freedom movement began in the Uptown Tenderloin, with the 1966 Compton Cafeteria riots preceding Stonewall by three years. Sally Stanford got her San Francisco start here, movie legend Frank Capra was living in the Uptown Tenderloin when hired for his first director’s job, and the community was long home to the city’s most powerful labor unions.

I’m sure that Green Apple Books sells many works written by science fiction icon Fritz Lieber while he was living in the Uptown Tenderloin’s Hotel Union. They also likely have works by Dashiell Hammett and Miriam Allen de Ford, other writers from a community missing from the neighborhood map

When you think about this rich history and the extraordinary people who have lived and still reside in the Uptown Tenderloin, the ignorance that underlies this map is both disappointing and sad.

I noted in writing about the late Brother Kelly Cullen, “he likely did more than any single person to convince influential San Franciscans that the Uptown Tenderloin is a neighborhood of children and families who deserve to live in a safe and healthy community.” Cullen’s efforts obviously missed the folks who are promoting this historically false San Francisco map.

Perceptions shape reality. When we conducted a survey to assess support for our proposed Uptown Tenderloin Museum, respondents who had never been to the Uptown Tenderloin had a more negative attitude toward the community than those who actually had been there.

We’ve done a lot to promote the Uptown Tenderloin in recent years. We will soon have historic plaques on almost 25% of the neighborhood’s over 400 historic buildings, new bars and cafes are opening, and our walking map of the historic Geary and O’Farrell corridor in the neighborhood has proved extremely popular.

But clearly there are those who remain oblivious to these changes, and I would suspect that those involved in creating, commissioning, and promoting the Uptown Tenderloin-free map probably never set foot in the neighborhood. We recently saw Planning Commissioner Bill Sugaya apologize for stating it would be good for a store to “sell drugs” in the neighborhood, a statement clearly made not in malice but in ignorance.

I have continually found that people who take the time to see the Uptown Tenderloin’s rich history and diverse population up close walk away with a far more positive perspective. Even longtime San Franciscans tell me that they had no idea that the neighborhood had so many architecturally restored historic buildings, and many are surprised at how much of the Uptown Tenderloin of the 1930’s remains intact.

Many Uptown Tenderloin residents are accustomed to being looked down upon, and of seeing blatantly false media coverage of their community. And most have more important concerns than challenging the distribution and promotion of a San Francisco neighborhood map that makes believe they — and the Uptown Tenderloin neighborhood — do not exist.

But I would hope that those whose lack of knowledge of San Francisco history led them to market a map that erases the Uptown Tenderloin start trying to educate themselves.

The map could provide what President Obama would describe as a teachable moment.

If this insult to the only central city neighborhood in the United States that has successfully resisted displacement and gentrification leads to greater citywide understanding of the neighborhood’s historic and ongoing importance, then the map will have served a positive purpose.

Meanwhile, those enjoying such Uptown Tenderloin restaurants and bars as Bourbon & Branch, Whiskey Thieves, Alaturca, Dottie’s True Blue Cafe, Lahore Karahi or Bodega Bistro — to name but a few — do not need a $24.95 map to get there.

Randy Shaw is Editor of Beyond Chron. To learn more about the Uptown Tenderloin, see our website at uptowntl.org and join us on Facebook.