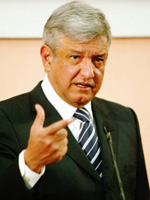 We are confronting a powerful group, economically and politically, that are accustomed to winning at all costs, without moral scuples. If there is not democracy, there will be instability. —-Lopez Obrador, July 8

My July 7 story on the left response to the stolen Mexican election brought responses from as far away as Scotland. Most were incredulous that anyone would think that the conservative candidate had not won fair and square, echoing the attitude Bush supporters took toward the reality that Gore won more votes in Florida in 2000 (one similarity between the two elections is that 900,000 votes were not counted in Lopez Obrador’s base on grounds that poll workers allegedly could not tell the voter’s intent). A sampling of letters is included here. On Saturday, an estimated 280,000 people flooded downtown Mexico city for a rally to support Lopez Obrador’s electoral challenge (this was the official government figure—the American media has almost universally used a 100,000 total, not explaining the discrepancy). The country remains fiercely split over the election, and the question remains why president-elect Felipe Calderon—who insists he won fair and square– does not simply agree to a recount to dispel his opponent’s claim of fraud.