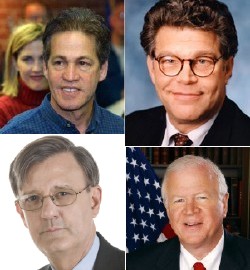 The year’s last unresolved elections won’t just decide if President Barack Obama has 60 Democrats in the U.S. Senate to accomplish his agenda. It’s really about two of the most hated Republican incumbents: Senators Norm Coleman of Minnesota, and Saxby Chambliss of Georgia. In the final stretch, both are playing dirty to keep their seats. Georgia’s run-off election is tomorrow, and Chambliss has employed the same kind of swift-boat attacks against Democrat Jim Martin that he used against prior opponents. A low turnout could save Chambliss, but Obama field campaign veterans are pounding the pavement to help Martin. Minnesota voters won’t get a “second chance” to pick between Coleman and Democrat Al Franken, as the razor-thin outcome is in a lengthy recount process – unless the U.S. Senate eventually calls for a new election. Meanwhile, Coleman has attempted to de-legitimize the recount a la George Bush, first by questioning its need – and then by raising frivolous challenges. The Minnesota race may literally come down to a small handful of questionable ballots – such as the one cast for “Lizard People.”

Everyone knew Jim Martin would be the underdog in the Georgia Senate race. The seat wasn’t even supposed to be competitive, until the economic crisis hit in mid-September. Chambliss was the only member of Georgia’s delegation to support the $700 billion Wall Street bailout, and Martin saw an opening. Democrats upset at how Chambliss attacked a disabled Vietnam veteran in 2002 (by linking him to Osama bin Laden) saw the prospect of sweet revenge, and took an interest in the race.

But anyone who knows Saxby Chambliss could see how he’d capitalize on white racist fears to get re-elected. Even before November, Chambliss noted that a high black turnout in early voting (an Obama-effect that clearly helped Martin) “has also got our side energized.” After he failed to get 50% in the general election and a December run-off was called, Chambliss complained to Fox News that “our folks” didn’t turn out enough.

In the run-off, Chambliss (who’s had the financial edge) has accused Jim Martin of letting children die when he ran the state’s Department of Human Resources – and the Republican Party has charged him with condoning child prostitution. The reason that’s so offensive is that one of Martin’s daughters was kidnapped when she was eight years old, but it’s the same kind of swift-boat attacks we’ve come to expect.

Republicans have prioritized this race, with Chambliss getting help from John McCain (who in 2002 had called his campaign tactics “beyond reprehensible”), Mitt Romney and Zell Miller. And Sarah Palin’s doing a last-minute statewide tour for his campaign. Jim Martin has had campaign visits from Bill Clinton and Al Gore, and Barack Obama did a radio ad for him.

But Obama himself has not come to Georgia to campaign. Conventional wisdom says that black voters who turned out in November will not come back in December, and an Obama visit could help change that. But with Martin as the underdog, Obama does not want to risk losing an election that could hurt his new presidency’s momentum. In 1992, President-elect Bill Clinton campaigned in Georgia for a December Senate run-off – and the Democrat lost. But if Martin loses, expect some to blame Obama for not doing more.

However, Martin has benefited from an outpouring of Obama campaign veterans who have jumped right into his campaign. Because December run-offs have very low turnout, this may give Martin enough of a people-powered field presence to prevail. As for the African-American vote, I believe that older voters will turn out – but it will be harder to get young black voters to come out again. Perhaps sensing this as well, Martin has a rally today with Ludacris.

“Every vote counts, unless your one vote decides an election.” That’s what we’re seeing in Minnesota, where the Senate race between Democrat Al Franken and GOP incumbent Norm Coleman is in a recount – and no one knows exactly which votes will be counted, and how to count them. After all the votes were counted and the election results certified, Coleman had a 215-vote lead – prompting a statewide hand-recount, as required by law.

At first, I believed we couldn’t possibly have another Florida debacle for two reasons: (1) unlike in 2000, citizen blogs are around to monitor such shenanigans like another Republican riot to stop votes from being counted; and (2) unlike Katherine Harris, Minnesota’s Secretary of State is a fair public servant who is running the process in a fully transparent manner.

But we’re talking about Norm Coleman here – a Senator who in 2003 called himself a “95% improvement” over Paul Wellstone, because he had a “much better relationship” with the Bush White House. First, Coleman attempted to stop a hand recount from even happening – as he called for a time to “move on.” But Secretary of State Mark Ritchie certified the result with Coleman up by 215 votes – and proceeded with the recount.

As the hand recount started, Franken picked up more votes – with the gap being as small as 163 at one point. That’s because hand recounts can assess voter intent in ways that a machine would not. For example, if a voter picks two candidates for the same office but then writes “no” next to one of them, a machine would simply disqualify their vote – but a hand count would realize the voter had just made an honest mistake. Not surprisingly, mistakes like these are more common in Democratic areas – so Franken picked up votes.

But at any time during a hand recount, a campaign can request that a ballot be set aside as “contested” – which means it doesn’t get counted, and a judge has to make a ruling later. As the Coleman campaign started contesting more ballots (often on frivolous grounds), the gap started to widen again. It’s clear what was going on here: Coleman wanted the initial recount to reflect that he still won, so a judge would be reluctant to rule on all the challenged ballots in a way that would shift the outcome. So the Franken campaign (in response) also started to contest ballots during the recount on dubious grounds.

Now we have over 5,000 “contested” ballots – with more to come. The Minneapolis Star-Tribune has a cool website where (after registering) you can review these contested ballots yourself, and vote on how you would judge the voter’s intent. After reviewing 200 of these ballots, my random sample gives Franken a slight edge – although it’s clear that each side has abused the process.

Both sides have contested ballots that were obviously cast for one candidate, but the ovals were not completely filled in – or there was a slight mark elsewhere on the ballot. But the Coleman campaign also challenged ballots that were clearly cast for Franken – because the voter picked John McCain for President. Or some voters picked McCain and then abstained in the Senate, so the Coleman camp says the vote was meant for them.

It’s clear at this point that Norm Coleman has undermined the credibility of Minnesota’s Senate recount, and we many never truly know who won the election. The United States Senate may ultimately have to decide – and they might even call for a whole new election to resolve it. They did that in 1974, when the outcome of a New Hampshire Senate race came down to literally two votes. Of course, I always believed that “every vote counts.”

One ballot that received a lot of media attention was the “Lizard People” ballot that came from Bemidji, Minnesota. For the Senate race, the voter in question filled in the oval for Al Franken – but also wrote “Lizard People” in the write-in box. And they also wrote in “Lizard People” for President, Congress, State Representative, Soil Water Conservation District, Mayor and School Board. But for all the other races, they filled in the oval for “write-in” (which they did not for the Senate race) – so the vote should go to Franken.

You can look at the “Lizard People” ballot here, and tell me how you think the vote should be counted.

Lucas Davenport, a 25-year-old from Bemidji, claims he cast the ballot for “Lizard People” and says that it was all meant to be a joke because he didn’t like the candidates. When pressed, he explained he intended his vote to be counted for Franken. Assuming it’s really him, that’s how it should be counted.

EDITOR’S NOTE: Outside of work hours and in his own capacity, Paul Hogarth co-hosted a low-dollar fundraiser for Jim Martin’s Senate campaign – and has volunteered in a couple phone-banks. He plays no advisory role, and did not co-ordinate with the campaign for this story.