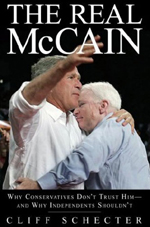 With a frightening number of Democrats saying they plan to vote for John McCain if their preferred candidate does not win the nomination, it’s time to evaluate who the senior Senator from Arizona really is. Two new books help answer that question. In The Real McCain, Cliff Schecter offers a gloomy portrait of a hot-tempered right winger whose opportunism has earned him mistrust from even those who share his beliefs. But it’s Free Ride: John McCain and the Media by David Brock and Paul Waldman that answers the more fundamental question: how does McCain get away with a “maverick” reputation that he does not deserve, and why does the press corps give him such fawning coverage when they gladly tear other politicians apart?

I love Cliff Schecter, because he’s one of those rare Democratic pundits who will go on political talk shows and be just as combative as his Republican counterparts. If you’ve never seen him on television, just watch how he ripped a conservative talking head to shreds in the wake of the Mark Foley scandal. Always armed with facts and a biting sense of humor, Schecter has helped defy the common perception that liberals are wimps.

In The Real McCain: Why Conservatives Don’t Trust Him – and Why Independents Shouldn’t, Schecter takes on McCain for evolving into a George Bush apologist who has flip-flopped on torture and tax cuts for the wealthy – and who switched from a “Goldwater isolationist to General Buck Turgidson from Doctor Strangelove.” Far from the “straight-talk” maverick he’s made out to be, McCain has a long track record of taking both sides of an issue – which is why true-blue conservatives have never trusted him.

For example, McCain got great press in 2005 for “standing up” to the White House on legalizing torture, and his history as a Vietnam P.O.W. gave him an aura of credibility. But the compromise that he crafted left the Bush Administration free to do what they want, while improving McCain’s moderate image. His bipartisan work on immigration has also rung hollow – as (to channel the late George Murphy) McCain was more motivated on this issue to please his allies in big business.

But it is McCain’s legendary temper and proclivity to get into scuffles with colleagues that make Schecter’s book most entertaining. By taking an absolutist approach when it comes to working on issues, McCain has long earned the enmity of fellow Republicans. As Schecter quotes Senator Thad Cochran (R-MS), “the thought of [McCain] being president sends a cold chill down my spine. He is erratic. He is hotheaded. He loses his temper and he worries me.” After reading about McCain, the thought of this guy holding a nuclear button would scare you too.

I made the mistake of reading Schecter’s book right after finishing Free Ride: John McCain and the Media by David Brock and Paul Waldman – which provides much of the same information that made it feel repetitive. But Brock (who is President and CEO of Media Matters) and Waldman take it a step further that makes (in my opinion) their book superior. With a rigorous analysis of John McCain’s political history, the duo persuasively explain how he has successfully gotten away with favorable press coverage where other politicians have not.

In Free Ride, Brock and Waldman explain the “three foundations” that McCain established to get fawning coverage: (a) his Vietnam War record, which he has repeatedly milked, (b) his work on campaign finance reform that created a perfect foil for reporters to paint him as “anti-Washington” and (c) his willingness to pamper the national press corps with candid conversations. He endears himself so much to reporters that they look the other way when he makes a comment that would doom another politician’s career.

But the Arizona media – who have known McCain for much longer – do not hold him in high esteem, as they’ve known him long enough to realize that beneath his veneer is a petty and vindictive man who thrives on being a “maverick” – but does not tolerate other mavericks. As one reporter explained, the different approaches by the national and Arizona media can be compared with the difference between a mistress and a wife. “The former is infatuated, aware of only his best qualities. The latter is ‘stuck’ with the man.”

In one of the most insightful parts of their book, Brock and Waldman compare McCain’s status as a “maverick” with other independent-minded Senators like Russ Feingold or Chuck Hagel. “The very word ‘maverick’ implies not only independence,” they write, “but also a willingness to take risks.” While McCain has broken from his party at times, it is almost always to take positions that are overwhelmingly popular with the public. Compare this with Feingold, who cast the lone Senate vote against the Patriot Act right after 9/11 – or Hagel, who criticized the Iraq War long before it was cool.

Like Schecter and other McCain critics, Brock and Waldman provide abundant data on McCain’s Senate voting record to prove he is no moderate – but in fact a very conservative Republican. But they also explain how he gets that reputation. When a more moderate Republican crosses party lines to vote with Democrats, the story is framed within the larger context of a partisan conflict. But when McCain does it, the narrative changes into “McCain and his rebellion.” He gets invited on all the talk shows, and the story becomes how John McCain is breaking from his party leadership again.

With this year’s political climate, there is no reason why Republicans should be able to keep the White House. G.O.P. recruitment for House and Senate races is anemic, and Republicans have lost three straight special elections for Congress in ruby red districts. But McCain is making it a close presidential race, which means that he’s attracting independent voters who don’t approve of the Republican Party. The word needs to get out soon – or else McCain could easily become our next President.

The Real McCain is a good resource to give to your friend, relative or co-worker who’s actually thinking about voting for McCain in November. But for liberals who are trying to understand how he gets away with being a “maverick,” Free Ride will be an indispensable guide this election. Both books will serve a purpose this year.