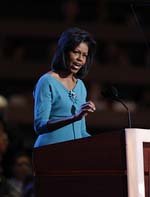 My first impressions, after nearly five hours at the Pepsi Center in Denver Monday night:

1. Anyone who tells you there is disunity at this convention is not simply delusional—they are flat out lying.

2. If there has ever been a major party convention with more African-Americans attending than this one has, let me know—I highly doubt it.

3. How is it possible that there is no wi-fi in the seating area of the Pepsi Center? It’s been suggested that this is intentional, so convention goers are not seen playing on their computers rather than listening to speeches. But it’s a lot of hours to be sitting without being able to write about the goings on, and it means much later nights for the press.

4. There are a huge number of union members here. Those I spoke to from AFSCME and the United Federation of Teachers—unions which strongly backed Hillary Clinton–said that everyone they knew was totally committed to Obama.

6. The convention seems to have a strategy of limiting the high-profile speakers. This means that virtual unknowns are spliced in between prime-time speakers, and that the crowd is mostly milling about until the “name” speakers arrive at the podium. This is apparently designed for in-house interviews (Caroline Kennedy was being interviewed by networks on both side of me) and for commercials–but you don’t see major rock ads interspersed with nonentities and is does make it harder to keep the convention crowd in a state of high excitement.

7. Those “Michelle” poles they handed out will be the convention’s biggest collectible–they’re probably on eBay as we speak.