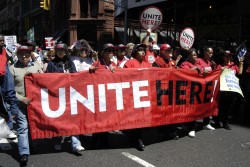 (Ed. Note: Recent reports of division with UNITE-HERE omitted some crucial facts, which are addressed below.)

We believe the merger that created UNITE HERE made sense in 2004 and we believe it makes sense today. The merger has improved our members’ lives and has strengthened our Union in all of its industries. The merger has not worked for Bruce Raynor because he believes that the Union is his personal property and wants to rule it as an absolute dictatorship.

Labor unions, like any other entity attempting to govern itself democratically and for the common good of its members, may at times may face difficult challenges. However, we are a membership organization with democratic processes. We have elected leadership bodies, we have a Constitution, and we have a Convention. When there are disputes or disagreements, these bodies serve as the core of our Union’s democracy.

Last November, Bruce Raynor told me that since he cannot win at our members’ Convention in June 2009, he planned “to start the war now.” Just moments ago, Raynor called members of our Executive Board “jerks” for resisting his call to split the Union. The disrespect Raynor shows our governing body of elected leaders is the same disrespect he shows the members of our union in his attempt to trample on their rights and futures.

Yesterday, a minority of the General Executive Board of UNITE HERE filed a frivolous lawsuit seeking to dissolve our Union. It is unfortunate that a small group within our Union continues to attempt to shun the democratic processes that ensure representation of our members

The lawsuit also makes a number of false claims. To name just one: The lawsuit claims to be filed on behalf of over 150,000 members, when in fact the Executive Board members who voted to dissolve the union represent just 114,000 members. A quarter of those members being counted as justification for a motion of termination came into the merged union from the former HERE. Many of these members were not consulted regarding the actions of Bruce Raynor.

Last week, the Public Review Board (which oversees UNITE-HERE) wrote to the Department of Labor describing the actions of Bruce Raynor, especially his attempts to hijack the democratic processes the Union’s constitution guarantees its members, and seeking an investigation.

I am proud that today a large majority of our General Executive Board voted to remain unified. We will not permit Bruce Raynor to split the Union by creating chaos and internal destruction. We will not allow for undemocratic attempts to takeover or split our Union. Instead, we will restore a democratic Union, a Union that fights for strong standards for our current members and a Union that fights to organize workers across North America.