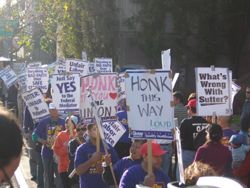 More than 150 health care employees and labor supporters rallied in front of Sutter California Pacific Medical Center yesterday, demanding the hospital’s owners agree to a mediator’s proposal for resolving a series of disputes between management and workers. Sutter Health Affiliates, which operates three hospitals in San Francisco, refuses to agree to the proposal despite its close similarity to agreements struck with all other major health providers in the city. Now, members of United Health Care Workers (UHW) have called for their first open-ended strike since 1992, hoping to pressure Sutter into a contract almost everyone involved considers a fair and equitable resolution to past conflicts.

The main bone of contention between Sutter management and UHW involves how much say health care workers have in how care is provided to patients and staffing levels at hospitals. In previous negotiations, this issue, along with several other conflicts involving employee benefits, prevented the two parties from signing a labor contract.

After the dispute dragged on longer than expected, UHW and Sutter agreed to federal mediation. Both parties deemed the process impartial and entered into it in good faith, claiming that whatever solution the mediator came to, it would be accepted.

Once the mediator made a proposal, UHW accepted it immediately, which union leaders say meant having to compromise on several important demands. Sutter, however, rejected it, despite it being almost identical to contracts signed by other health care giants across California, including Kaiser Permanente and Catholic Healthcare West.

“We were willing to compromise, but they did not,” said UHW head Sal Roselli. “It really shows they put profit over people, and we’re going to fight them until they say yes to the agreement.”

A litany of Democratic and Green Party leaders back UHW’s fight, with their list of supporters including Nancy Pelosi, Ross Mirkarimi, Barbara Boxer, Jerry Brown, Chris Daly, and Gavin Newsom.

“It’s unconscionable that Sutter would ask for mediation, then once the mediator makes a decision, they reject it,” said Tim Paulson, head of the San Francisco Labor Council. “We’re here to demand Sutter say yes.”

A large contingent of Sutter workers attended the rally, including 15-year employee Jose Devera, who said he hopes Sutter will agree to the contract so employee-management relations can start to improve.

“The relationship between the top and the bottom right now is very poor,” said Devera. “They don’t respect employees, and they only seem to care about management. They don’t care about us, and we hope today we can help to fix that.”

The event also showed the widespread unity among the labor community in the fight, with Sutter employees standing alongside members of other unions and health care employees from across the Bay Area.

“We are here to support all health care workers,” said Bessie Wong, who works at a hospital not owned by Sutter. “Because what they’re doing is unfair to the workers. And that’s not right.”