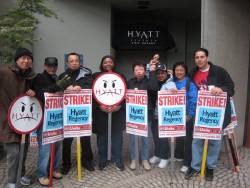 Inside the plush Hyatt Regency McCormick Place in Chicago on June 9 assembled blue-chip Hyatt stockholders – anxiously anticipating dividend announcements that would perhaps justify a nice evening on the town, maybe in one of the city’s acclaimed five-star restaurants. Protesting outside were hotel workers who had their own concerns about how to put food on the table. Hyatt employees average less than $30,000 a year in most of the country.

Stockholders, on the other hand, have good reason to expect a nice big slice of the pie. Hyatt shares ballooned 50% since the formerly privately-owned company went public in late 2009. In that deal, Pritzker-family owners alone netted close to $1 billion. The cash register has been ringing ever since.

The hotel union, UNITE-HERE, reports that “as recently as March 2010, Hyatt had $1.3 billion cash on hand – on average, nearly five times as much as any other hotel company.” National hotel industry profits are also rebounding upwards.

The union’s Local 2 in San Francisco, for example, reports revenue growth for city hotels “projected to be 4% for the remainder of 2010, 12% in 2011 and 14% in 2012.” “We haven’t seen these dramatic double-digit numbers since the 1970s,” emphasized Local 2 press coordinator Riddhi Mehta.

Everyone seems to be cashing in except employees. As a result, 400 UNITE-HERE Local 2 members in San Francisco walked off the job at the Hyatt Regency on June 8 for a three-date strike, launching an employee-endorsed boycott of the hotel.

On the picket line, union representative Tina Chen summed up the feelings of the workers “who know well that the company is making loads of money. A one-year contract we offered them last year would have kept our current health insurance, maintained our pensions and provided a modest wage increase while still only increasing labor costs by 1.5%. Why do they try to squeeze us?”

This is a question so obvious that it just won’t go away. In fact, support for hotel workers is growing nationally as contracts expire in major cities like San Francisco, Chicago, Los Angeles, Vancouver and Honolulu where coordinated actions against the Hyatt are all taking place this week.

Among the protesters in Chicago were 100 religious leaders who were stopped at metal detectors as they attempted to peacefully enter the stockholders meeting. Vowing not to leave until speaking with a representative, Robb Webb, chief of Human Resources finally did show up.

“I applaud your interest and I applaud the concern,” Webb piously began. When questioned about the abrupt firing of 100 housekeepers in Boston (who were replaced with cheaper, outsourced labor), he reassured the clergy that it was “not consistent with the values of the company. We’re not proud about how that was handled.”

But, while maintaining his composure, if not his dignity, he also reported that the difficult “business decision” was final and the workers would not be rehired. [all Webb quotes by Chicago Breaking Business reporter Julie Wernau]

The Hyatt Hotel Corporation boasts a portfolio of 434 properties in 45 countries. It is a formidable entity along with the billionaire Pritzker family of Chicago. The Pritzker’s are not only extremely good at making money, being listed on Forbes’ “America’s Richest Families” since it originated in 1982, but they are also quite good at buying influence.

For years, Superior reported profits and paid dividends to its owners of nearly $200 million “without regard to the deteriorating” condition of the bank, according to a 2002 report by the Federal Deposit Insurance Corporation (FDIC).

Cozying up to Obama was one of a series of calculated moves to repair the family’s damaged personal reputation and to cultivate a Mad Men carefully-crafted image of social concern. For example, the Pritzker Foundation recently made a $10 million tax-deductible donation to Stanford University “to create a scholarship fund dedicated to supporting Chicago students with the greatest financial need.”

There is plenty of evidence that this apparent generosity is nothing more than transparent self-serving pretense that would shame all but perhaps Mr. Webb. In reality, the miserly Pritzkers continually cut staff and increase workloads at their hotels. As a result, the Hyatt had the highest reported rate of injury in 2009 for housekeepers in an academic study of 50 major hotels as reported by the progressive blog Firedoglake.

Despite this long record of financial malfeasance and labor hostility, President Obama continues to cast Penny Pritzker in her unlikely role as financial advisor and advocate for American working families. Predictably, “penny-pinching” Ms. Priztker joined with other billionaires on the Economic Recovery Advisory Board to oppose the Employee Free Choice Act legislation which would allow millions of workers to select a union free from well-documented patterns of employer harassment.

But there is much more of value for the Pritzkers than even their treasured personal bank accounts. It is about power, power to limit employee expectations now and into the future, a power assuring corporate profits for the long term.

On the other hand, a fair agreement at the Hyatt would allow Local 2 to keep intact the best contract in the industry while setting standards for other hotels with expired contracts as well.

“Power never takes a back step – only in the face of more power,” argued Malcolm X. This is such a contest, between two very determined forces; one with the solid support of the workers and a growing list of community allies, the other with the entrenched influence of wealth.

Facing down the Pritzkers, hotel workers in five cities made a show of force this week against the third-largest hotel chain in the country. These actions mark an important strategic escalation.

Clearly, this will not be the last strike, protest and boycott if hotels continue stalling negotiations. More nationally coordinated actions will certainly develop as contracts for around 50,000 hotel workers soon expire in major cities across the country.

The towering San Francisco Hyatt Regency sits on the edge of the famed bay waterfront where police and long shore strikers battled during the 1934 victorious general strike. Today, there is a plaque nearby honoring martyred picketers Nicolas Bordoise and Howard Sperry who were felled.

Working-class cafes and lunch spots have long ago been replaced by elite shops and fancy bistros shaded by magnificent, imported palm trees lining the entire length of the city’s grand waterfront traffic lanes overlooking the bay.

Different times and a somewhat different city to be sure, but the hotel workers actions today harkens back to the very best traditions of this historic district nonetheless and portends dramatic showdowns that lie ahead in this great city and across the country.

Carl Finamore is a delegate to the San Francisco Labor Council, AFL-CIO, and can be reached at local1781@yahoo.com