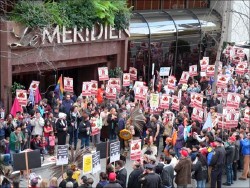 I parked a few blocks away and was on the lookout for hotel workers to lead my way to UNITE-HERE Local 2’s July 23 contract convention in San Francisco’s Moscone Center. Since 1986, the union has successfully used these massively attended conventions to mobilize its membership on the eve of contract fights. I knew this was not going to be a normal union convention, that it was something different. But I got even more. I got insight into how a union has been able to successfully mobilize and involve a widely diversified membership, including thousands of immigrants, over a 25-year period.

I was definitely expecting an enthusiastic group. So I figured spotting these union workers wouldn’t be too hard, easily distinguishable from other late afternoon downtown pedestrians rushing home after work.

I wasn’t looking for the usual male coat of arms and body armor of expensive business suits with the standard blue and red power ties. Nor was I expecting to see distinctly uncomfortable high heels and the broad array of fashionable scarves, purses and other trendy, brand-name accessories many working women wear less by choice and more by custom and company policy.

Instead, I kept my eye out for people wearing more casual and comfortable clothing after obviously having shed work uniforms. As I scanned the crowded sidewalks, there were several other things that caught my eye.

I was seeing small groups who obviously felt comfortable with each other as they talked, laughed and waved without once slowing their fast pace. They were all going somewhere together. What stood out most, however, were the large number of women and the impressive rainbow blend of Asian, Latin and Black.

The contracts for close to 23,000 workers in Los Angeles, Chicago and San Francisco expire in August with bargaining in the City by the Bay alone involving 32 hotels, 17 companies and another set of smaller hotels. In each case, management is expected to propose major concessions across the board.

As one of San Francisco’s largest unions with 13,000 members, Local 2 has also been among its most active, winning the best contracts in the country and organizing nearly 90% of city hotels.
Fresh off a victorious 2004-2006 battle that included a headline-grabbing three-day strike/lock-out and a two-year boycott, Local 2 won common August expiration dates for several dozen hotels in the three major cities that will now for the first time bargain together. This is absolutely key to the union’s strategy.

Local 2 President Mike Casey declared to cheering delegates that “if the hotels delay our bargaining, then hotel contracts in other cities will also soon expire and we will insist on common expiration dates for everyone before any of us settle.”

Casey continued to rouse the convention by emphasizing that the union “will negotiate separately with each hotel if that’s the way they want it but we will do it as one union with one union standard. And our negotiators at each hotel will include committee leaders from a mix of other hotels so that our basic proposals remain the same for every hotel. One union, one contract!”

The room exploded! Workers understood how conditions in one hotel or even one city could not be maintained without the solidarity of thousands of other workers. This is a big difference from other industries where master contracts have fallen to the wayside. Neither in trucking, airlines, auto or steel is there a similar union bargaining strategy of protecting the union standard throughout a particular industry, at each location, north or south, east or west, big or small.

The Message is the Medium

True to my expectations, the convention was an exciting eye-opener. It was immediately convened with the chair announcing that the “Contract is Coming Up and asking rhetorically “Are You Ready to Fight? The assembled responded emotionally with increasingly loud, rhythmic shouts of “Damn Right!”

The militancy of Local 2 members was proclaimed for all to hear. Then the strength of the union’s diversity kicked in, including in the opening prayer. Rev. Israel I. Alvaran, a Local 2 organizer, began with “Nasa Diyos ang awa, nasa tao ang gawa.” From Tagalog to English, it translates “in God we find mercy and compassion, but we have to work and struggle for our own destiny.”

The audience of 1000 union hotel leaders included many immigrants and upon hearing the first familiar words of the invocation, many responded by applauding and completing the phrase along with the Reverend.

I was able to observe several other times throughout the convention how the membership was united by acknowledging its variety of cultures and languages. Again and again, different groups of workers voiced their pride and enthusiasm upon hearing their particular language recognized and respected.

In addition to English, subsequent contract and strike preparation reports were also given in both Cantonese and Spanish. Each time they were met with loud cheers from an appreciative audience. I was reminded of the historic and victorious 1912 Lawrence textile strike which had a leadership committee assembled by the militant Industrial Workers of the World (IWW) where several dozen languages were heard “but all speaking with one voice.”

The Economy Won’t Be an Excuse

Local 2 is different in another important way in how it confronts concessionary demands. The union will not concede the recent economic slump as bargaining leverage for the owners when, in fact, profits over the long haul have been extremely large.

Once again, the long view is a good reminder for other unions to consider when bargaining during difficult periods.

In any case, an accurate financial picture of the hotel industry was drawn for delegates in order to prepare them for the inevitable spectacle of employers shedding crocodile tears and complaining about their hardships. In fact, in the last few decades pursuit of profits, the hotel industry has been squeezing workers tighter and tighter.

For example, in 1988, there were 70.7 hotel workers per 100 occupied rooms. By 2008, this number dropped to 52.9 workers per 100 rooms. Local 2 Research Director, Ian Lewis, reflected the mood of the delegates when he blasted the employers for “not increasing staffing levels when they were making all this profit the last 20 years.”

Each convention report elicited the same obvious conclusion from even the newest, least experienced union member “it takes union power to raise benefits, wages and working conditions, you cannot rely on the goodwill of the employers.”

Again, this education focus is something we in other unions can learn when planning our conferences and conventions.

It Starts with Organizing Members

Much of Local 2’s success is owed to the fact that each individual hotel has a union committee. The convention’s goal of recruiting 800 committee members is rapidly becoming a reality. It is a top leadership priority.

Becoming a committee member starts with attending two union meetings, participating in two actions, and taking responsibility for two assignments. In other words, someone who consistently defends the union, helps enforce the contract and organizes other workers on the job. Then you come to the committee meetings that formulates and enacts the union’s plan.

Most stewards in other unions do not have to make anywhere near this commitment but it is how Local 2 has established itself as an activist union with substantial rank and file participation.
Devoting major resources to recruiting, training, educating and mobilizing members is another absolutely critical lesson other unionists can learn from Local 2.

The End is the Beginning

I was getting accustomed to the spirit of this convention. It was both contagious and exciting. So, I guess I should not have been surprised when the meeting adjourned to march to the Intercontinental Hotel a few blocks away.

Management was caught completely off guard as hundreds of pickets surrounded the hotel. Plodding rush hour traffic greeted us with horns honking, hands waving and voices cheering us on.

The convention previously heard reports from the Intercontinental union committee about flagrant contract violations. These rather bold, mostly women in-house leaders had been organizing regular, unannounced lobby rallies with several dozen co-workers to protest these violations.

In response, the company sent a letter to the union demanding an end to employees disrupting the smooth functioning of the hotel. The employer cited contract language prohibiting lobby protests.
The letter was read to the convention by President Casey who then defiantly appealed for everyone “to march to the Intercontinental to let them know we can’t be pushed around and that we back up our Committee.”

This spontaneous and effective solidarity mobilization on behalf of workers at one hotel sets the stage for the important fight emerging in the next few months. It also sets a very good example for all unions.

Carl Finamore was an invited guest at UNITE-HERE Local 2 convention. He is former President (ret), Air Transport Employees, Local Lodge 1781, IAMAW, which represents workers from major airlines at SFO, SMF, OAK, SJC and RNO airports. He can be reached at local1781@yahoo.com