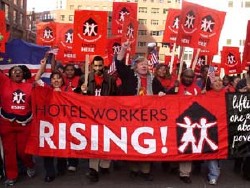 SEIU’s campaign to take over key UNITE HERE locals suffered a major setback yesterday, as 2300 workers at the Philadelphia School District voted by a 2-1 margin to remain affiliated with UNITE HERE rather than switch to SEIU. The New York‑based SEIU 32BJ had led efforts to win the election, viewing Philadelphia as a stepping stone to its larger goal of taking over all of UNITE HERE’s food service locals. Instead, workers dealt SEIU a crushing 1,121-551 defeat. UNITE HERE’s victory comes after recent wins over SEIU in St. Louis and among Delaware North company food service workers, indicating that not only has SEIU’s attempted raids failed, but UNITE HERE is even stronger today than when SEIU’s attacks began.

Yesterday’s UNITE HERE victory in Philadelphia does not end Bruce Raynor’s and SEIU’s hostile takeover campaign, but it leaves them without a clear target for future membership gains. SEIU pulled out all the stops in Philly, and yet its attempt to woo workers was soundly rejected.

SEIU long justified its raids on UNITE HERE on the grounds that food service was logically the jurisdiction of the former UNITE, not the current UNITE HERE. Reports were that SEIU 32B head Mike Fishman was one of the strongest advocates for SEIU intervening in UNITE HERE’s internal fight, as he believed that SEIU could capture UNITE HERE’s food service local in Philadelphia and elsewhere.

Fishman’s expectations proved wrong. As Emily Pridgen, a Food Service worker at Hardy Williams School put it, “We are proud that our members have supported their union and rejected SEIU’s raid. Now we all have to work even harder to come together to fight for a fair contract with the School District. We deserve more!”

Dominga Gonzalez, a noontime aide from Luis Muñoz Marin School, echoed Pridgen: “We would like to ask our brothers and sisters in District 1201 to tell SEIU, their international union, to accept these results and drop their legal appeals, so we can all begin bargaining our new contracts.

This is UNITE HERE ‘s third major victory for in recent months in its struggle against SEIU. As I wrote on August 26, 2000 Delaware North workers ratified a contract with UNITE HERE, thwarting a SEIU raid. Three weeks ago, 2300 members of Local 74 in St. Louis voted to reaffirm their affiliation with UNITE HERE.

A consesquence of SEIU’s attacks on UNITE HERE was the latter leaving the Change to Win Labor Federation and returning to the AFL-CIO. AFL-CIO President Richard Trumka expressed delight at UNITE HERE’s Philadelphia victory.

In a message to UNITE HERE President John Wilhelm, Trumka, stated, “I am proud that workers supported their union, UNITE HERE Local 634, and took a stand against improper and counterproductive raids. Unions should be working together to improve workers’ lives, not conducting raids against workers who already have a union.”

SEIU Executive Vice-President and former UNITE HERE President Bruce Raynor issued a press release even before the Philadelphia votes were counted. Its clear that Raynor expected SEIU to win or at least make it close in Philly, and the tone of his letter reflects someone who is unaware of, or detached from, reality:

“Workers have reported that UNITE HERE has used an array of illegal tactics, but there is an established process to hear those challenges and right those wrongs. This is undoubtedly a better model for workers than cutting deals with employers, and we urge UNITE HERE in joining us in a commitment to a democratic process in which workers have a right to determine their future and choose their union. Neither Workers United nor UNITE HERE has the right to take that decision away. We challenge UNITE HERE to allow all the members of UNITE HERE and Workers United to vote. President Wilhelm has refused to consider our proposals to end the fight between our unions. Now it’s time to let the members decide.”

Cutting deals with employers? That’s precisely what UNITE HERE and other labor activists have long accused Raynor of doing.

Insisting workers have the right to vote? Isn’t that what just happened in St. Louis, Philadelphia and Delaware North?

And some might ask if SEIU is so insistent on giving workers the right to vote, why have they held up multiple elections in California sought by workers aligned with NUHW? And why is SEIU delaying a union election among unrepresented members in Santa Rosa?

UNITE HERE Stronger Than Ever

Six months ago, UNITE HERE was fighting for its very survival. SEIU thought it could starve UNITE HERE financially, and force John Wilhelm to make a bad settlement on Andy Stern’s and Bruce Raynor’s terms.

But SEIU should have realized that a union whose members have waged the longest strikes in modern U.S. history would not quickly surrender. And it turns out that SEIU’s attacks galvanized UNITE HERE’s membership, bringing the union to a stronger place today than when SEIU’s raids began.

It was UNITE HERE Local 26 in Boston that brought nationwide publicity over the firing of non-union Hyatt Harborside Hotel housekeepers by Obama Campaign Finance Chair Penny Pritzker. When workers across the nation saw UNITE HERE fighting for housekeepers who were not even union members, it sent a powerful message about UNITE HERE’s priorities.

And as the campaign against Hyatt goes national, it will become even more difficult for Raynor to convince workers that UNITE HERE does not support their best interests.