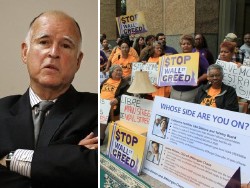 SEIU, AFSMCE and likely the California Teachers Association are joining with Governor Brown and big corporations to back a November tax initiative that sunsets in 2016 and bypasses a straight tax on millionaires in favor of taxing those with lower incomes. Despite the expected huge Democratic turnout, the state’s largest unions are supporting a corporate backed plan that is less progressive than the grassroots millionaire’s tax, produces less revenue, and earmarks nothing specifically for education. Even worse, it is only temporary, with voters having to approve an extension in four years. Why would labor back such a flawed plan that polls show is less popular than the straight tax on millionaires? Because Brown convinced labor leaders to side with him and his corporate allies, rather than with the Courage Campaign, the Alliance of Californians for Community Empowerment (ACCE), the California Federation of Teachers and other grassroots groups seeking to raise $6 billion annually by raising taxes on millionaires.

When I heard that most of organized labor and likely the state Democratic Party would be supporting Governor Brown’s corporate-backed, temporary-tax initiative rather than the long planned millionaire’s tax, I found it hard to believe. But my information was then confirmed by news reports.

Despite all the activism around Occupy, the state’s leading unions will be putting all their money and troops behind an initiative that raises taxes on people of all incomes, rather than targeting millionaires. This initiative also requires another ballot struggle in what could be a far less favorable political climate in four years.

Instead of targeting the 1%, the labor-backed initiative raises billions of dollars from a sales tax hike. I’m sure the Howard Jarvis anti-tax folks can’t wait to run ads about AFSCME’s running a $400,000 campaign in San Francisco attacking sales tax hikes as part of its campaign against Mayor Ed Lee, yet now urging state voters to back such a measure.

Despite the renewed campus activism throughout California that has emerged around the Occupy movement, the labor-Brown-corporate backed initiative earmarks nothing specifically for higher education. In contrast, the millionaire’s tax guarantees an additional $3.6 billion annually for this vital need.

Cheryl Deutsch, President of UAW 2865 – UC student-workers, the union that represents 12,000 TAs, readers, and tutors said, “We’ve been beaten and pepper-sprayed for telling the millionaires and bankers on the boards of our universities that they and their peers need to pay more in taxes for public education and essential services. Rather than siding with us, the Governor’s initiative sides with those same millionaires and bankers by increasing sales tax on the rest of us.”

Charlie Eaton, Financial Secretary of UAW 2865 added, “The Governor’s initiative makes students and workers pay more in sales taxes and doesn’t devote any of the new revenue to our state’s higher education system. We need the Governor and Sacramento union insiders to side with us by supporting a progressive initiative that will do that.”

The grassroots groups behind the millionaire’s tax were working closely with various SEIU locals, and were hopeful of getting the SEIU state council to support the measure. But intervention by Governor Brown shifted the union’s stance, with the large statewide SEIU-UHW local leading the fight to support the politicians’ plan.

SEIU President Mary Kay Henry can get arrested at Occupy events, and her union can put out press releases and give speeches about targeting millionaires, but when the rubber hit the road in California, SEIU sided with the political and corporate elite against the grassroots groups mobilizing for the 99%. Labor had a great opportunity to make common cause with grassroots activists in California, and instead chose the more politically safe course.

Contrary to media reports, CTA has not yet made a final decision to back the Governor’s plan over the community measure, but it appears imminent. The only reason I can think of that the California Teachers Association would back a plan that does not guarantee a dollar beyond the legally mandated Prop 98 allocation to K-12 schools is because the Governor has sweetened the pot in some side deal.

The Safe and Secure Path?

California labor unions are typically cautious about ballot measures. When they get behind an initiative, such as the state minimum wage hike, they pick an increase amount that is overwhelming favored in polls. This results in smaller victories, but triumphs nonetheless.

But in polling done for the proposed tax measures, the most popular idea was that the richest Californians should pay their fair share to restore funding for schools and services. According to pollster Ben Tulchin “Extensive recent public and private polling show that California voters strongly support a progressive approach of raising taxes on the rich to fund education and other essential services that have been cut in recent years.”

So did labor take a more risky course in going with the Governor and his corporate allies?

The Governor likely argued that polls taken a year before elections do not mean squat. He likely argued that the millionaires’ tax would bring in tens of millions of opposition funding, while corporate California has already signed off on the measure including the sales tax hike. Brown offered labor a bird in the hand, which the largest unions accepted

Brown did not have to tell union leaders that he would be the Governor at least until 2014, and would have the opportunity to repay labor in other areas if they joined his 2012 initiative team. That’s understood.

Also understood is what Brown gave to corporations in exchange for being part of his coalition. Corporations likely demanded the sales tax hike and avoiding a tax on millionaires, as the last thing they want is to deal with a ballot initiative whose 1% v. 99% stirs up the passions of the Occupy movement.

The lack of support from large unions makes funding the millionaire’s tax measure much more challenging. The Courage Campaign in particular has had success raising money online, but SEIU, AFSCME and CTA could have easily provided enough money to virtually guarantee victory.

Now these unions will be putting millions of dollars into a tax measure not even opposed by the state’s large corporations or the wealthy. Meanwhile, grassroots groups and some smaller unions will be working to pass a tax on those earning $1 million and up, restoring an estimated $6 billion annually for education, essential services, public safety, and road maintenance, with about $3.6 billion going to K-12 as well as higher education.

Three other measures have also been filed, including one filed by billionaire investor Nicholas Berggruen that is supported by the head of Google, Eli Broad, Willie Brown and other luminaries. On first glance even this measure appears preferable to the Brown plan, as it raises $10 billion largely for education without a sunset clause.

The multiple measures led the San Francisco Chronicle to conclude that “Voters have rejected the last seven tax-raising measures put before them, and history shows that when Californians see similar-sounding measures on the ballot, they vote no on all of them.”

Not quite. The closest example to what voters could face in 2012 occurred in 1988, when multiple insurance reform measures resulted in voters defeating nearly all but passing Prop 103, the most progressive of the bunch. Measures without grassroots support and dependent on television advertising have problems in a crowded market; a millionaires’ tax backed by a grassroots campaign can emulate Prop 103’s success.

California’s leading unions have again put their interests in the hands of Jerry Brown, a politician who has shown mixed loyalty to their cause, and even to the Democratic Party. The campaign for the millionaires’ tax (formally known as the California Funding Restoration Act) offers a different vision for achieving social change, one that is more in tune with the spirit of the Occupy movement.