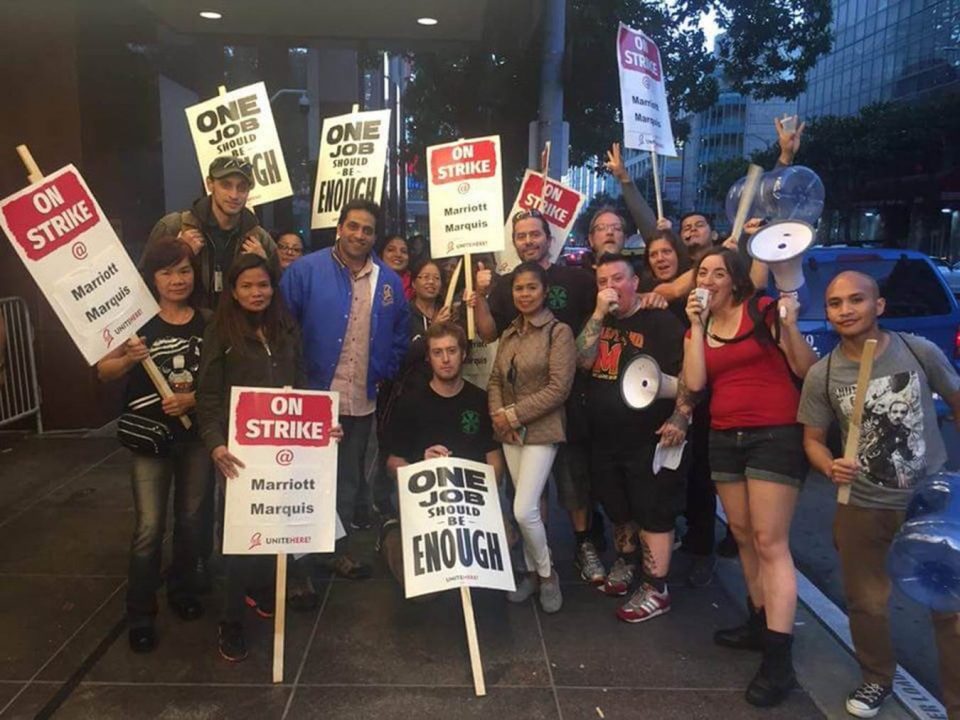 As popular support grows for replacing private insurance plans with Medicare for All, critics of the single-payer approach have been playing up the fact that some top union officials, and their political allies, don’t want to do away with job-based medical coverage.

“There’s no question that ultimately we need to establish a single payer system,” says national AFL-CIO President Richard  Trumka. “But there has to be a role for those hard-fought-for, high-quality plans that we’ve negotiated.” Echoing Trumka in Democratic primary debates, former Vice-President Joe Biden, tells labor audiences that, “if you have a generous union-backed plan and you have given up union wages to get that plan, you can keep it.”

Harold Schaitberger,  leader of the International Association of Fire Fighters, has even suggested that his union, which backs Biden now, might not support a Democratic presidential candidate who favors Medicare for All. Says Shaitberger: “We’d be very troubled with any nominee who advocates for the elimination of private employer or negotiated plans.”

Maybe these statements do reflect the concerns of some higher paid workers with more “generous union-backed plans.” But they are out of touch with the needs of lower-wage workers whose employers offer health insurance plans that are completely unaffordable and inadequate.

I can personally attest that the union I work for is constantly waging “hard fought” battles to secure “high quality plans” at several Bay Area nursing homes and hospitals. At these workplaces, our members, unlike most American workers, can collectively bargain about the amount of premium contributions, co-pays, and deductibles they are required to pay for doctor visits or hospital stays.

For example I was recently in a contract bargaining session with members who work at a small nursing home  in San Francisco. A Certified Nursing Assistant told the management bargaining team about her struggles to get care with their current health insurance plan. “Because of the $6000 deductible it’s as if we have no health insurance at all,” she said. “When I injured my leg a few weeks ago, the doctor wanted me to get an MRI. I told them I couldn’t do it. I can’t pay $1000 for an MRI, when I’m making only like $18 an hour. Every time I have to go to physical therapy it costs $70. Sometimes I cancel the appointments because I can’t afford them. I am afraid that they are going to tell me I need surgery, because I just don’t know how I’ll be able to pay for it.”

One of the company’s executives, who had flown in from their regional office in Southern California that morning, tried to look sympathetic. “Thank you for sharing,” he said, “I know how hard it is to share something like that. I’m just paying off a debt from a medical procedure myself.” But he went on to say that the proposal we had made to change to a fully employer-paid health insurance with no deductible was “ridiculous and unrealistic.” We pointed out that workers used to have this kind of health insurance plan before the company took over their nursing home, and that the company’s profits had tripled since that take-over. He explained matter of factly that profitability has nothing to do with how the company compensates its employees.

After this very informative exchange management left the room so that the workers and I could caucus privately. Another member of the bargaining team, a housekeeper in his late fifties who has worked at the nursing home for over 20 years, was furious. He and his wife, who works in the kitchen at the facility, often have to go to the hospital for different healthcare services.  Every time they are shocked by the costs, which all have to be paid out of pocket.

We know that it may take months of further bargaining, probably even informational picketing and strikes, and support from community leaders, and elected public officials to get an affordable healthcare plan for these workers who have dedicated their lives to providing quality healthcare to their patients.

But that won’t stop the owners of this and other for-profit health care facilities from putting workers’ benefits on the chopping block again, at the earliest possible opportunity. Even the much higher-paid health care professionals I represent at reputable “not for profit” institutions like Marin General Hospital must struggle, in every round of contract bargaining, to maintain decent health care benefits.

At a November 2nd Medicare for All Rally in downtown San Francisco, Unite Here Local 2 President Anand Singh voiced his support for the reform, noting how his members at the Marriot hotel chain had to go on strike last year for 61 days to secure fair wages and affordable health insurance. Like Singh, I believe that affordable health care is a human right, whether you’re a firefighter, a housekeeper, or even the executive of nursing home chain. Workers should not have to strike for something that is a basic human right. It is heartening that union’s like Local 2, that National Union of Healthcare Workers, the California Nurses Association and many others see that union members and their families would all benefit from a system providing comprehensive, high quality care no longer tied to anyone’s age or employment.

If there’s any politician out there – particularly a candidate for president, like Joe Biden – who believes that Medicare for All is too costly or that we aren’t “ready” for such a profound reform–I want to personally invite them to our union’s next bargaining session over health benefits, or even better, out to our next picket line. They will quickly discover what a high price workers already pay to maintain job-based medical coverage, even when they can organize and bargain for the best possible “union-backed plan.”

(Alexandra Early is a union organizer in the Bay Area. The views expressed here are her own. She can be reached at earlyave@gmail.com.)