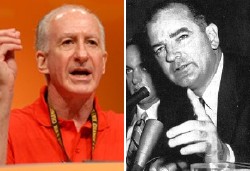 UNITE President Bruce Raynor is using his union treasury to wage a destructive campaign of character assassination and disinformation against one of San Francisco’s — and the nation’s — most progressive institutions, the Hotel Employees & Restaurant Employees International Union (HERE). These attacks, part of UNITE’s effort to disaffiliate from UNITEHERE, are being framed as part of an internal union split but are actually designed to destroy one of the most progressive, successful and activist unions in the United States. Although Raynor’s dismal record of organizing new workers over the past decade makes him the union equivalent of the recently deposed General Motors head Rick Waggoner, he and his consultants are attacking HERE’s organizing success despite the massive increase in unionized hotel and gaming workers over the past decade. It’s time to expose the truth about Raynor’s efforts to destroy hotel worker organizing, and to rally behind a union that has consistently backed economic justice, immigrant rights, and the progressive movement.

I have waited in vain for the traditional or even labor-oriented media to expose Bruce Raynor’s campaign of lies and disinformation against HERE, one of the nation’s most progressive unions. But it appears that journalists do not want to “get in the middle” of what they see as an internal fight, even if this silence rewards Raynor’s aggressive disinformation campaign against HERE.

When UNITE and HERE merged in 2004, the two union presidents—Raynor and John Wilhelm—agreed to share control. Wilhelm noted that he was not big on administration, and indicated that he would likely eventually step aside

But Raynor’s failure to build UNITE since the merger, and his questionable contract negotiations around the food service and uniform conglomerate, ARAMARK, led Wilhelm and others in HERE to doubt his leadership skills. Wilhelm decided that he would not step aside but would seek the sole presidency at the June 2009 convention (since HERE controls a voting majority, this ensured Wilhelm’s election).

Raynor went ballistic at the news, and embarked on a campaign to destroy HERE that continues to this day. He unilaterally revoked the UNITEHERE merger, and affiliated the former UNITE locals with SEIU, under the new name “Workers United.”

Raynor and his backers claim the merger didn’t work and should be ended. But if, as SEIU’s Andy Stern and others have suggested, Raynor was simply ending a “bad marriage,” Raynor could have taken the high road and emphasized how much he admired Wilhelm and HERE, and expressed regret that the two unions were not a good fit.

Instead, Raynor charged HERE with the marital equivalent of domestic violence, alcoholism, and even child abuse. He has now spent months and hundreds of thousands of dollars denigrating, disparaging, and even try to destroy his onetime partner.

For example, Raynor recently told Women’s Wear Daily, “We had to leave UNITE HERE because that union was not putting workers first.” This claim was repeated by anti-union groups in the March 27 Dallas Morning News as part of their effort to defeat a local HERE initiative, and will likely become a staple in hotel owner’s campaigns against unionization.

Raynor, through his consultant Steve Rosenthal, has funded mailers to HERE members telling them that their union was ineffective and that they should consider switching to one that would get them better contracts. If this is only about a bad marriage, why is Raynor seeking to breed distrust among hotel workers against their union?

Rosenthal, whose America Coming Together in the 2004 Kerry campaign was a dysfunctional mess that spent over $100 million in progressive dollars, also created an anti-HERE website. I am not going to promote its anti-union message by giving its address, but this Raynor-funded vehicle rivals the Right to Work Committee in soliciting attacks on the hotel workers union.

Like an angry husband insisting in divorce proceedings that his wife is a whore, Raynor’s attacks on HERE are increasingly wild and vicious. Most recent is his group’s claim that many HERE organizers, including Tho Do of San Francisco’s UNITEHERE Local 2, are engaged in “despicable employment practices” that “prey on young and inexperienced organizers.”

According to the widely distributed email/flyer, Tho Do is engaged in “interrogation, intimidation, and the psychological torture” of young HERE organizers. It urges people not to recommend young activists apply for HERE jobs, and even accuses the union — which employees Cleve Jones of Milk fame and which helped lead the fight against California’s Prop 8 — of homophobia!

I met Tho Do in 1980, when she worked at the Vietnamese Youth Development Center in the Tenderloin. I have worked in the same neighborhood with her all these years, and have admired her rise to a position of leadership at Local 2.

I have never heard anyone say a negative word about Tho, and think I would know if she were suspected of “preying” on young organizers.

But Raynor does not care how many reputations he destroys in pursuit of his ambition. His attack on Tho Do should cause many to ask him the same question that Joseph Welch asked of Joe McCarthy as the latter sought to destroy reputations in the Army-McCarthy hearings over fifty years ago: Have you no sense of decency, sir? At long last, have you left no sense of decency?

But even McCarthy had the decency to take credit for his attacks. Raynor’s defamatory charges against Tho Do and other hard-working HERE organizers is signed only by a group called “Stop the Pink Sheet Now,” offering no names along a New York City address.

Raynor’s chief claim — that HERE has spent millions of dollars with nothing to show for it — is regularly repeated despite being completely false. HERE Local 2 President Mike Casey addressed this point in a letter in the April 6 Nation, which stated in pertinent part:

“Contrary to UNITE HERE general president Bruce Raynor’s assertion, our union has organized more hotel workers (seventy-five new hotels) in the past three years than in the previous five, in addition to winning the best contract in years.

In 2004 thousands of San Francisco hotel workers went on strike, eventually broke a fifty-three-day lockout and endured two years without a contract to win the right to organize through card check–all on behalf of workers they didn’t even know. Moreover, during our Hotel Workers Rising campaign, tens of thousands more union members in eight cities across North America demanded, fought for and achieved card-check rights in 2006. If that campaign was not about organizing, Raynor evidently does not know what is.”

While Raynor repeats his claims about HERE’s organizing failures, little is said about UNITE’S lack of organizing success not only since the merger, but since Raynor became its leader in 2001.

UNITE’s long and expensive campaign against CINTAS has yet to pay dividends, yet all Raynor talks about is HERE’s alleged failures. Yet as John Wilhelm has pointed out, HERE’s record of building union density even exceeds that of UNITE’s new partner, SEIU:

“Andy Stern’s SEIU has failed to grow beyond just 9.4% union density in its core private hospital jurisdiction and just 10.9% density in private nursing homes. UNITE HERE by comparison has achieved 48% density in gaming and 19% in the hotel industry.”

Just as the assassination of the Archduke Ferdinand plunged allied countries into World War I, so has Raynor’s frustrated ambitions brought SEIU and HERE into open warfare and destroyed the Change to Win Labor Federation. While Stern insists that SEIU is not engaged in any attacks against HERE, Wilhelm filed anti-raiding charges with Change to Win against SEIU on April 3 on the grounds that said union was “interfering with the collective bargaining relationships of UNITEHERE members.”

Reports are rampant of SEIU members infiltrating HERE-organized facilities in Phoenix and Pittsburgh, and while SEIU disputes these claims, the fact that they are so widely believed means that Raynor has succeeded in creating a major and likely permanent rift between the two unions most aligned on immigrant rights, EFCA and a range of progressive issues.

Good work, Bruce. Just as the UFW and the Teamsters were not morally and politically equal when they battled for farmworkers allegiance in the 1960’s and 1970’s, nor are UNITE and HERE equally at fault here. If Raynor wanted out, he could have acted with respect. Instead, he has opened up a Pandora’s Box of false accusations which will hurt union organizing and the labor movement for years to come.