“#Unfit: The Psychology Of Donald Trump”–Review 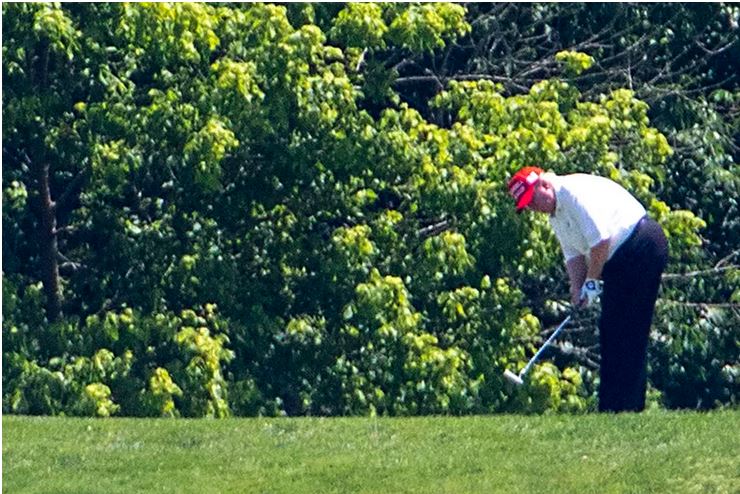 The president’s tendency to cheat at golf is cited as evidence of his mental condition in “#Unfit: The Psychology of Donald Trump.” Tasos Katopodis/Getty Images

As this review of Dan Partland’s new documentary “#Unfit: The Psychology Of Donald Trump (hereafter “#Unfit”)” is being written, the carnival of bald-faced lies and open bigotry calling itself the 2020 Republican National Convention has wrapped up.  The news media has praised Trump’s wife Melania for making a convention speech gaslighting America about her husband’s character.  The man she calls an authentic person and totally honest also happens to be the same man who’s publicly uttered over 20,000 lies to the nation he’s supposed to be leading.

The appearance of Partland’s film thus comes as a timely antidote.  It’s just been released theatrically in select cinemas across the country on August 28, 2020.  But starting September 1, 2020, the more likely way that Beyond Chron readers can see this documentary will be via such Video On Demand outlets as Amazon Prime Video, Xfinity On Demand, and Apple TV.

The big question, though, is whether catching this documentary is truly worth the viewer’s time.  The answer to that question depends on how much information and interest the viewer brings to the proverbial table.  If the concept of “gaslighting” and a general knowledge of how Hitler and Mussolini came to power is already familiar information, then the early sections dealing with Trump’s malignant narcissism will probably have the most valuable material.  A low information voter might benefit from watching the film, assuming they’re still willing to give credence to real experts as opposed to the right wing’s glib merchants of doubt.  But if the potential viewer happens to agree with the 57% of Republican voters who feel having over 178,000 Americans dying from coronavirus exposure is an “acceptable” number of deaths, then it’s terribly unlikely “#Unfit” will do much to change their minds.

However, the mutation of a majority of the Republican Party into a Trump personality cult does not obviate the need for this film’s existence.  If anything, its conclusions about Trump’s mental state damns by implication the complicity of Congressional Republicans in allowing this spectacularly corrupt and mentally unfit sociopath to remain another hour in the White House.  An appalled viewer who watches this film yet refuses to stop politically sitting on their hands is a viewer equally deserving of blame for the damage to America caused by a second Trump Administration.

The Duty To Warn Coalition (hereafter “Duty To Warn”) serves as “#Unfit”’s Paul Revere.  The organization consists of mental health professionals and other concerned professionals from such areas as public policy, medicine, and social work.  John Gartner, Ph.D., the founder of Duty To Warn, appears in the film to explain why the organization’s members have dedicated themselves to warning the American public of Trump’s manifest unfitness for the office of American president.

The analysis of how Trump’s recorded behavior can be categorized in one or another of these tells will engross the viewer.  Unlike the “covfefe” brouhaha, the incidents cited (e.g. Trump’s cheating contractors suckered into working for him, the aforementioned publicly lying over 20,000 times at current count, and his publicly humiliating his political opponents) provide more substantial damnations of this man who’s repeatedly demonstrated he’s a danger to America.  Fromm’s theory proves a great and credible framework for Duty To Warn’s case against the current president* (thanks to Charles S. Pierce for this sobriquet for Trump).

An important caveat offered in “#Unfit” is the insight that having a personality disorder does not by itself automatically disqualify a person from running for political office.  Abraham Lincoln’s depression helped him weather the stresses of leadership during the Civil War.  And being a narcissist is usually an essential character element in pursuing any sort of political office.  The danger from Trump’s narcissism, as mentioned above, comes from its being intertwined with a long public record of his sociopathic and destructive behavior.

At this point, apologists for Trump (such as one shown in a Faux News clip in the film) may claim psychiatrists are not entitled to comment on Trump’s mental state.  As Trump’s never sat down for a mental health evaluation with these accusers, these psychiatrists supposedly have no information to make their case.  Also, the Goldwater Rule supposedly prevents psychiatrists from making public comments about the mental state of a person they’ve never personally met.  It’s darkly ironic that the Trump apologist who criticizes “unfounded” public accusations makes unsupported claims about the critical psychiatrists’ political bent and motivation in the same breath.

“#Unfit” shows that Trump apologists’ citation of the Goldwater Rule turns out to be a selective misunderstanding of current psychiatric practice.  It’s reminiscent of conservatives who can recite Martin Luther King, Jr.’s “content of one’s character” line in their sleep while ignoring those statements of King which challenged their bigoted attitudes.

For the uninitiated, the Goldwater Rule came about as a response to a notorious incident involving then-presidential candidate Barry Goldwater.  Freudian psychiatrists publicly speculated Goldwater resented his father’s Jewish heritage or that he displayed repressed homosexual tendencies.  An interviewee in the film who remembers the incident agrees the Freudian psychiatrists were wrong to make such public comments.

However, what Trump apologists fail to understand about the Goldwater Rule is that it’s not about silencing unfavorable public comments.  It’s about publicly making speculative claims not backed by evidence.  That’s not the case with Duty To Warn’s charge that Trump is a malignant narcissist.  Using the Fromm framework, Dr. Gartner shows how Trump’s behavior snugly fits the listed criteria for this mental illness.

Lack of an in-person interview of Trump does not undermine Dr. Gartner’s conclusion.  That’s because psychiatry has advanced beyond a primary reliance on in-person interviews of those suspected of being mentally ill.  In-person interviews with people who actually know the possibly mentally-ill person matter more.  Equally relevant, as said above, are recorded instances of the Orange Skull’s behavior.  Fortunately, given Trump’s narcissistic pursuit of celebrity over the decades, there’s a surfeit of records showing the real sociopath behind the man presenting himself as a “successful businessman.”

Ultimately, the Goldwater Rule’s relevance regarding America’s current president has been trumped (ha ha) by the Tarasoff Rule.  That rule came about after a therapist’s patient named Tarasoff followed through on his threat to murder his Significant Other.  Tarasoff’s therapist heard his patient’s threat yet did nothing to warn his intended victim or even the authorities.  In response to the Tarasoff case, a new rule gave mental health professionals a duty to warn the public about people whose mental illness makes them a risk to society.  Or do Trump’s defenders and apologists suddenly want to carve an exception to the principle of “If you see something, say something?”

Where Partland’s film starts falling apart is in its failing to make the transition from the “here’s the problem” stage to the “what can the viewer do about it” stage.  Instead of pushing the outrage aroused in reasonable viewers to constructive action, “#Unfit” proceeds to dispel that anger with Authoritarianism 101 lectures and shallow soundbites passing for political analysis.

But perhaps this result was to be expected.  The film entrusts its political analysis of the harm created by Trump’s terrible leadership to members of the Never Trump crowd.  William Kristol doesn’t appear to have displayed greater wisdom since the days when he initially declared the fame-hungry moron Sarah Palin a suitable Vice Presidential pick.  The bigger disappointment, though, comes from the film’s touted interview with George Conway aka co-founder of The Lincoln Project.  Despite his proximity to White House power, his insights about Trump the man don’t go much deeper than his describing the current president as “a practical joke that got out of hand.”

Credit should be given for Scarmucci’s pointing out how Hilary Clinton sabotaged herself with her deplorables comment.  But the good insight that “if a voter knows that the candidate hates them, they will vote against that candidate” turns out to be one Scarmucci is parroting.  Nor does the former Press Secretary offer any good reason why the responsibility for the liberal and conservative political “getting to know you” conversation doesn’t equally lie with more conservative voters to try understanding more liberal voters’ viewpoints.

By contrast, “#Unfit”’s discussion of authoritarianism doesn’t do enough to show why it’s harder now for Americans to walk back from embracing authoritarianism.  Has the right-wing media sphere symbolized by Faux News and Info Wars made it difficult for people to mentally escape such thinking?  The irony that in 60 years Americans have gone from fighting the Nazis to becoming the Nazis seems lost in “#Unfit.”

Partland’s film would have truly benefited from bringing in an expert on cult behavior to discuss feasible ways to neutralize the political harm posed by Trump’s supporters.  “#Unfit” operates under the assumption that such supporters are merely people whose political lashing out represents their frustrations at being unable to survive hard financial and social times.  But a blind willingness to seriously poison oneself with bleach or to treat the lunatic QAnon pedophile conspiracies as a realistic explanation of how the world works are marks of cultists who’ve drunk the mentally poisonous Trump Kool-Aid.

“#Unfit”’s ultimate failure comes from failing to provide a satisfactory answer on what  Trump’s ascendancy to the presidency means for the future of America’s democratic system.  It takes the simplistic and unsatisfying tack of “if Americans remember their roots, the nation will survive Trump and ultimately thrive again.”  Yet it could be counter-argued that the election of Trump should be treated as a political Black Swan event made possible by the Republican Party’s aggressive lust for absolute power.  From that perspective, not enough is currently being done to protect the American democratic system in the future from the probable harms expected from a more ruthless and totalitarian-minded person elected to the presidency.

“#Unfit” may ultimately be a far less effective warning call than it imagines itself to be.  But at least “Commander In Cheat” writer Rick Reilly’s tales of the way Trump cheats at golf despite his evident skill capture the pathetic pettiness of the man who is America’s current president.*

(“#Unfit: The Personality Of Donald Trump” is now available through such streaming sources as Amazon Prime Video, Apple TV, and Google Play as well as Xfinity On Demand and DirecTV.)