by Alison Stevens Rodrigues on November 16, 2005 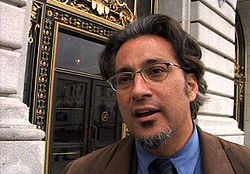 Supervisor Ross Mirkarimi received a standing ovation yesterday after the Board of Supervisors unanimously passed his legislation establishing guidelines in support of local, legitimate medical cannabis dispensaries (MCDs). “The needs are very clear and we should all be proud of what we achieved today,” said a relieved Mirkarimi.

After months of discussion and deliberation with community members, the Board of Supervisors, and the Mayor’s Office, Mirkarimi said he is glad this chapter of the legislation is over. Prior to its passing, Blair Moser, member of the Fair Oaks Community Coalition, said she was anxious for it to succeed. While some MCDs are wonderful, she said, others are not. Last summer, Moser explained, a patient walked out of a neighborhood MCD and was held at gunpoint for their cannabis supply.

“It happened in broad daylight, in front of children,” said Moser. “And they replaced the cannabis but didn’t call the police – the mother of the children had to do that.”

Moser had said she hoped the legislation would pass because it would ensure safe access for patients while also providing for safer communities.

“It certainly was a major achievement,” said Shona Gochenaur, of Americans for Safe Access San Francisco, after the legislation was approved. “For the community to have worked so successfully with politicians on this issue – it’s wonderful.”

The move to more stringently regulate the number of MCDs in San Francisco began in early spring, when Mayor Gavin Newsom received estimates that 40 dispensaries were operating here.

As a result, he and the Board established a temporary moratorium that blocked new MCDs from opening until after more stringent guidelines were set. While scheduled to expire on Nov. 20, a passing vote yesterday extended the moratorium by 16 months and 15 days.

In the meantime, the approximately 35 existing clubs will have to adhere to new guidelines, including one mandating that MCDs in operation prior to April 1, 2005 obtain a permit from the Department of Public Health within the next 18 months.

Of the legislation, Mirkarimi said it will be driven by the Department of Public Health and facilitated by the Planning Commission, which will hold a discretionary review hearing on each MCD application.

Another guideline requires all dispensaries to advertise the fact that they serve only “qualified patients,” i.e., those with official medical marijuana identification cards.

And further, MCDs will face tighter zoning laws. For instance, they will be prohibited from operating within 500 feet of schools (1,000 feet if smoking is allowed on the premises).

Cathy Smith, operator of one of the most respected MCDs, Hope Net, likewise pointed out that a number of people rely on the daily socializing that goes along with smoking in an MCD. It’s an important part of their lives, she said.

But if a dispensary has to relocate or close because of the new guidelines, and a patient no longer has that communication with others like themselves, the consequences for that patient could be devastating, she said.

Smith further expressed concerns that if a school were built near an existing dispensary the MCD would be forced to relocate. That would not be the case, Mirkarimi assured Beyond Chron – as long as a dispensary had its permit.

In addition to being prohibited from operating near schools, MCDs also will be banned in industrial and residential areas. Mirkarimi said that while he was able to “grandfather in” most of the existing dispensaries there were four of five that fell outside of these guidelines.

As for those few that do have to relocate, Mirkarimi said he will work to find them a suitable home.

“It is so important that our veterans, elderly and indigent have quality medicine,” said Gochenaur. “No one should have to choose between it and their groceries.”