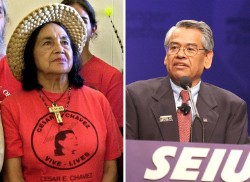 After electing the most pro-union President in decades, organized labor is being torn by internal fights. And at the heart of these conflicts are veterans of the United Farmworkers of America (UFW), whose strategic innovations have shaped today’s labor movement and whose “Si Se Puede” (“Yes We Can”) rallying cry became the hallmark of Barack Obama’s campaign. One dispute, now occurring the California Central Valley city of Fresno, pits Eliseo Medina, a former UFW Executive Board member and now Executive Vice-President of SEIU, against his former UFW Executive Board colleague, Dolores Huerta. The backdrop: an election among Fresno’s 10,000 home health care workers who are currently represented by SEIU, but who are now being urged by Huerta and others to join the National Union of Health Workers (NUHW). The other ongoing conflict finds SEIU and UNITE HERE — the two unions most shaped by the UFW’s legacy–battling over SEIU’s raids on UNITE HERE’s jurisdiction and membership. This fight has put longtime UFW allies on opposite sides, and has even led UFW veteran Fred Ross, Jr. to leave SEIU after ten years so that he could help UNITE HERE resist SEIU’s attacks.

How did this conflict emerge? As recently as April 2006, UFW alums Stephen Lerner and Eliseo Medina asked Huerta and the prominent UFW veteran Reverend Wayne “Chris” Hartmire to come to the University of Miami to help SEIU win a “Justice for Janitors” organizing campaign. While Huerta pressed the janitors’ cause with University of Miami President Donna Shalala, Hartmire provided strategic advice to religious supporters. Similarly, SEIU worked closely with UNITE HERE on the massive immigration marches of spring 2006, and on the national campaign to pass comprehensive immigration reform.

But since 2006, two developments have raised questions whether SEIU President Andy Stern is leading his union down the same path that resulted in Medina and other key leaders leaving the UFW, and that caused the farmworker movement’s decline.

First, SEIU moved to consolidate its local chapters throughout the nation. In addition to reducing administrative overhead and freeing up organizing dollars, the plan also gave Stern the right to select the leadership of the newly consolidated locals. This prevented workers from electing their own leadership for three years.

As a result, Stern appointees, not representatives elected by the membership, soon dominated SEIU’s governing Executive Board. When the Board then made controversial decisions — such as breaking up its third largest local, whose former leadership then started NUHW — opponents argued that this was Stern’s decision, not that of a truly democratic process.

Nearly thirty years ago, it was Cesar Chavez’s decision to deny farmworker representation on the UFW’s Executive Board at its 1981 convention that represented the final blow to his union’s growth. In the years leading up to that event, Chavez’s critics were often fired or forced out, raising the same questions about union democracy that have now emerged under Stern.

The second development dividing UFW alumni was Stern’s decision to encourage Bruce Raynor and the former UNITE to secede from UNITE HERE and join SEIU. On March 23, Raynor’s faction affiliated with SEIU as “Workers United,” and SEIU has been raiding UNITE HERE’s hotel, gaming and food service workers on the grounds that they are now part of its jurisdiction. Stern engineered this major policy shift with little or no public debate within SEIU. Workers were shifted from UNITE HERE to SEIU through little-noticed, small turnout elections — such as fewer than 100 voting in a bargaining unit of over 2000 — that make a mockery of union democracy.

The UFW precedent is clearly on many minds. Medina responded to Huerta’s urging Fresno’s home care workers to vote for NUHW by noting that in the UFW she “led the campaign to fire and expel” rank and file workers “because they were independent of the UFW leadership and accountable directly to the members.” Huerta responded that Medina had left the UFW in 1977 “when Cesar most needed him.” While the two have privately debated over the UFW’s legacy, the SEIU-NUHW battle has brought this dispute between two giants of the UFW and labor movement out in the open.

NUHW’s appeal to Fresno home-care workers directly challenges SEIU’s commitment to union democracy, and could prove the defining issue as balloting begins this week. But the election’s end will leave wounds between the many UFW veterans on both sides of this conflict that will not be soon healed, weakening if not ending the bonds between those working side by side for social justice for over three decades.