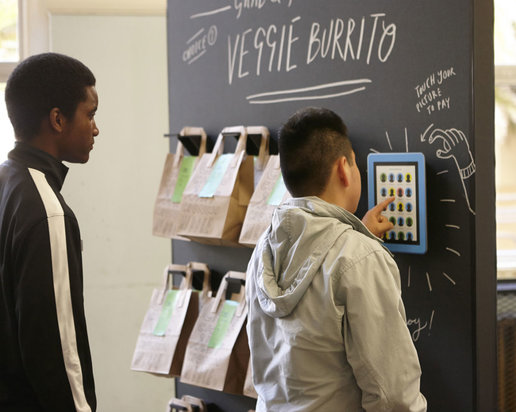 Can letting students preorder their cafeteria lunch using a phone app get more kids to eat school food? How about offering more places where they can pick up their meal? Or maybe having school staff promote the idea that school lunch is cool?

All of these ideas, and many more, are part of San Francisco Unified School District’s Future Dining Experience, a multi-year effort designed to get more kids to eat healthy school meals.

Thus far, media coverage of the Future Dining Experience (FDE) has been a gushfest, but not based on any kind of data showing that more kids are eating school lunch as a result of the FDE. Instead, stories have relied on praise from folks like Sandy Speicher, a partner at IDEO, the firm that developed the FDE plan with SFUSD, to pitch the idea that a redesign of the cafeteria is all it takes to get more students to eat healthy school meals.

All that will be changing soon, as the UC Division of Agriculture and Natural Resources’ Nutrition Policy Institute and UC Berkeley School of Public Health recently received a nearly $2 million grant from the USDA to study the Future Dining Experience. For three years, researchers will examine its impact on the number of students choosing school lunch, as well as its effect on plate waste (food students dump in the garbage), the amount of fruit and vegetables students consume, and obesity. They will even determine whether the FDE generates enough extra school meal revenue to cover its own costs.

The grant is sponsored by the USDA’s National Institute of Food and Agriculture (NIFA), which is funded by Congress and focused on finding solutions to problems including food security, food safety, and child obesity.

Just as one must take with a grain of salt much of what passes for “research” in the food world, (e.g. – a study funded by the American Beverage Association implying diet soda is more effective than plain water for weight loss; a study funded by the peanut industry attributing most peanut allergies to parents not feeding their infants enough peanuts), one should also cast a skeptical eye at glowing reports from IDEO staffers on the “success” of the IDEO-designed Future Dining Experience.

Some articles even claimed the FDE has already solved all of the problems it tackled (although of course offering no proof to back up those claims.) This May 2014 article in the digital architecture and design magazine designboom portrays FDE concepts like take home dinner kits, communal dining at elementary schools, and a community kitchen, as already happening, when in fact even now, a year later, they are still just ideas on paper.

Redesigning cafeterias to make them more pleasant spaces for student dining is an important part of the FDE plan, and has been the focus of much of the media coverage. But the truth is, with just one SFUSD cafeteria having received its planned FDE makeover (with two more in the works for completion this year), there is no way to know if the redesign is accomplishing its goal.

Despite the fact that the Roosevelt Middle School cafeteria unveiled its new appearance in October 2014, the school district has yet to publicly release any data on whether more Roosevelt students are choosing school lunch now, as compared to last year with the old cafeteria design.

But the UC study won’t be focusing on the bond-funded Roosevelt cafeteria remodel, instead looking at the less costly, quicker-to-implement concepts of Smart Meal technology (allowing students to preorder school lunch on their phone), multiple points of sale, and staff promotion of school meals.

With no dog in this fight, the UC researchers will be able to give a clearer sense of whether the Future Dining Experience is able to live up to its hype.

24 schools to be studied

“We are just starting our ‘baseline’ data collection, measuring plate waste in all 24 schools, administering a student survey, and collecting data on school meal participation. We’ll collect the same measures in the spring of 2016 and 2017 (comparing changes in these outcomes between intervention and control schools), and then again in spring of 2018 in control schools only, to see if they also show change after getting the intervention.”

It will be refreshing to finally see some assessment of this project based on data, rather than the speculation, opinion, and incomplete information on which most Future Dining Experience articles have been based.

A New York Times opinion piece went so far as to suggest that maybe the way to get more kids to eat school meals is to stop trying to improve the food, a theory that has yet to be proven valid in any school district.

Meanwhile, an article in the Atlantic mentioned that a few years ago, in an effort to get more kids to eat school lunch, SFUSD “tried ditching frozen entrées in favor of fresher meals—but the numbers barely improved.”

However, over the course of the next school year, that number began to slip, and a February 2015 SPUR report indicated (in a footnote on page 21) that, as compared to the 2011-12 school year (the last full year of SFUSD serving frozen reheated school lunches from previous vendor Preferred Meal Systems), the number of students eating school lunch in 2013-14 was up only 5%.

Still, that decline may have happened because SFUSD followed the advice of that New York Times opinion piece mentioned earlier, and stopped focusing on the quality of the food. Instead, after a big push to promote the new Revolution Foods meals in spring 2013, all energy in 2013-14 was directed towards trying to implement some of the FDE innovations.

One of those innovations in particular, calling for lowering costs by more use of government-provided commodity food in school lunches (on page 143 here), may in itself be the reason why some students have chosen to abandon the school lunch program.

All SFUSD elementary schools serve only Revolution Foods lunches, but at the middle and high schools, students are supposed to have a choice between the regular or vegetarian Revolution Foods entree du jour, and a couple of other entrees that are made on site from commodities.

That would be fine if it were a true choice, but I have heard repeatedly from some schools that they are not receiving enough of the Rev Foods meals to satisfy demand, that students don’t really like the site-made commodity choices, and that some students are once again choosing to go hungry rather than eat food they don’t like when the cafeteria runs out of the Rev Foods meals.

That’s a shame, because that’s exactly what students were doing before SFUSD made the switch to serving more expensive, but more appealing, freshly prepared Rev Foods lunches.

Now that the UC researchers will be measuring plate waste, will the site made choices be improved so that more students will be willing to eat them? Typically from year to year, the more popular items are retained and the less popular choices are replaced by something new.

That could be problematic, as changing the food offerings from year to year could be a confounding factor in the study – if plate waste decreased, how would researchers know if the decrease was attributable to the FDE interventions they are studying, or to the introduction of potentially more appealing food, which is not an intervention in the study?

Madsen explained, “We worked with SFUSD to pick items that should be continued.  SFUSD will work with us in subsequent years to try and match up the food items offered so they’re the same (or as close as possible) across years.”

Would SFUSD be able to send a larger number of Revolution Foods lunches to participating schools that are running out, without affecting the results of the study? After all, if kids now are skipping lunch because they can’t get the Rev Foods hot dog or Firecracker Chicken, might not more of them choose school lunch (or throw away less) if they were able to get the meal they wanted?

“It would depend on how that was rolled out,” said Madsen.

A starting point, not a solution

For the record, I am 100% behind providing students with a more attractive space to eat (and shorter lunch lines, appealing healthy food, and an atmosphere of dignity and respect, rather than shame for needing a free meal) and I have said so repeatedly over the years. I would support renovating the cafeterias, and just about any idea that helped kids get their lunch faster, even if not a single additional student ate school lunch as a result, because there are already plenty who do eat in the caf. Don’t they deserve a nice place in which to dine, and sufficient time to eat their meal in peace?

But if a plan is being hyped as The Solution to getting more students to choose school meals (and this one certainly has been), then I want to see some data to back up that claim. Right now, the Future Dining Experience is a starting point towards a solution, not The Solution itself.

Whatever the findings of this study are, they can only serve to help SFUSD refine and improve the Future Dining Experience. Interventions that are shown not to work can be rethought or abandoned, while those that succeed right out of the gate can be rolled out to more schools.

Cafeterias that can provide prompt and convenient meal service to a robust number of students benefit every student, but especially the lower income kids who rely most on school meals. A school meal program patronized by increasing numbers of kids, who eat more of the fruit and vegetables in their meal and throw away less food, is one that will be more financially stable, ensuring that the healthy food all kids need to thrive will continue to be available to them at school.