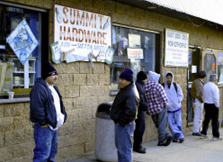 For many California workers, according to a UC Berkeley study released today, a full-time low-wage paycheck is simply not enough to make ends meet. As a consequence, 2 million California families rely on publicly funded safety net programs-even though one or more family members work-at a public cost of over $10 billion a year.

“California’s ‘new economy’ has produced an hourglass pattern of job distribution, fostering growth of high and low-wage jobs but little in between,” explained report author Carol Zabin of the UC Berkeley Center for Labor Research and Education. “Low-wage workers are relying on public assistance to make ends meet. Low-wage employers are essentially shifting their labor costs onto the public.”

The researchers found that small improvements in wages could move many families off public programs, freeing up scarce resources for families currently on waiting lists. If all workers in the state earned a minimum of $8 an hour, program costs would be reduced by $2.7 billion. A movement to $14 per hour reduces expenditures by 5.6 billion dollars. Likewise, if jobs included health benefits, even at current wage levels, $2.1 billion in expenditures could be put to other uses.

The report, “The Hidden Public Costs of Low-Wage Jobs in California” was written by the UC Berkeley Center for Labor Research and Education for the National Economic Development & Law Center. The report analyzed the participation of working families in the ten largest state-wide safety net programs in 2002, including Medi-Cal, CalWorks, the federal Earned Income Tax Credit, Food Stamps and Housing Vouchers. The report found:

“When wages are kept low, taxpayers make up the difference,” notes Art Pulaski of the California Labor Federation. “We need better paying jobs with benefits. It’s good for our families, our communities and taxpayers.”

“We need a long term vision for our state, not just short-term cuts and band-aids,” said State Senator Richard Alarcon, D-Los Angeles. “The answer is to expand the middle class by creating good jobs and investing in training.” Senator Alarcon is the author of Senate Bill 1639, which would expand access to higher education for low-income people, including those on public assistance.

“California doesn’t have a lot of extra money right now, so we need to invest our public dollars with an eye to the future,” said report sponsor Tse Ming Tam, of the National Economic Development & Law Center. “The stability of our economy requires that we help low-wage workers move towards higher skills and earnings, and not just use public subsidies to perpetuate a low-wage economy.”

The report was commissioned by NEDLC with support from the William and Flora Hewlett Foundation, and is the second in a series of white papers informing policy solutions to working poverty in California.