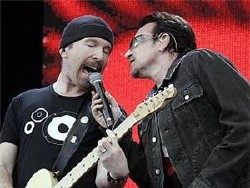 The Irish band U2 is among the leading cultural stars in using its fame to promote a better world. Lead singer Bono has contributed time, money and his reputation to causes ranging from the environment to hunger to Third World poverty, and his commitment is unquestioned. That’s what makes plans by U2 guitarist the Edge (actual name is David Evans) for a massive Malibu housing development one of those “say it ain’t so” events. According to the New York Times, Evans is proposing a 156-acre development in the Malibu Hills that will include houses ranging from 7,000 – 12,000 square feet. And instead of simply claiming that he’s a wealthy rock star who can build where he damn well pleases, Evans is promoting his mega houses as a “bench mark of sustainability.” It is bad enough when developers of high-rise condos claim they are serving a “Green Agenda,” but for a self-proclaimed environmentalist to see despoiling pristine hills as an act of “sustainability” redefines the term.

Those opposed to addressing climate change often attack Al Gore, Bono, and other prominent proponents as hypocrites for using fuel to fly to conferences, or for having enough wealth to “afford” the expense of “going green.” These right-wing critics are clearly angry over the positive press for sustainable policies that celebrities create, and the world would be a better place if more people with star power and wealth used such to foster social, economic, and environmental justice.

So I want to be clear that I would have no problem if U2’s legendary guitarist, the Edge, bought a 12,000 square foot house in the Malibu hills or anywhere else. My concern is that he is instead planning on building a major development on pristine property, and that he is justifying the project on it fostering “sustainability.”

Evans’ plans include five houses, including one for his own family. He bought the property in 2006, and now states, “We just had this dream of building a house that was in perfect harmony with these hills. We see it as something that could be a benchmark of sustainability.”

It’s hard to see why Evans thought that his houses would be “in perfect harmony” with the hills when to reach his development requires the construction of a 20-foot-wide, 1600-foot-long access road. And when 70,000 cubic yards of dirt must be trucked to and from the site (Evans could potentially get electric-powered trucks for the task, but the removal of so much dirt from the hills has raised geologic concerns).

If Evans really wants to preserve the harmony of the hills, he would leave the area alone. After all, to those not living in the proposed compound it will appear not as a “benchmark of sustainability” but as the self-indulgent despoliation of the earth by a spoiled rock star.

And based on my knowledge of Evans that is utterly contrary to his values.
Evans is different from the many profit-driven developers who seek a marketing edge by touting their project’s future compliance with green building standards and securing LEED certification; for him, this is clearly a labor of love.

But the great guitarist appears not to recognize that his plans directly contradict the view that combating climate change requires lifestyle changes. You can’t tell the people of the world that they need to cutback on fossil fuels and use less energy when your own life decisions contradict this.

It’s like Governor Arnold Schwarzenegger seeking praise as a great environmentalist when his driving a Hummer sends the opposite message.

If actually approved, FOX News and the conservative media will turn Evans into a poster child for Green Hypocrisy. And it will give right-wing critics of Bono an opening to attack his good works as well, by referring to his failure to criticize his bandmate’s ill-conceived Malibu project.

Sadly, Evans is only the latest developer to transform a great concept of environmentally sustainable development into a cloak for selfish desires.

In San Francisco, a long desired plan for a downtown “transit hub” is now inextricably linked with the construction of a 100-story building, far and away the city’s tallest. This blight on the skyline will require massive fossil fuel and energy use regardless of how “green” it is deemed, yet proponents argue it is necessary for the center for CalTrans and other transit lines to move forward.

In Berkeley, we see an outspoken environmentalist Mayor back new downtown highrises under the remarkable reasoning that this will reduce pressure for further suburban sprawl. As if families buying houses in Brentwood, Pittsburgh or Vallejo will instead choose a studio, one-bedroom or two-bedroom downtown condo in Berkeley.

One is hard pressed to think of a single new high-rise proposed anywhere in the United States that is not being trumpeted as representing a step forward to a greener world.
Such structures can play vital roles in local economies, but let’s not start justifying their construction as critical toward improving the environment.

Evans’ site is surrounded by nearby wealthy property owners who know how to delay or stop projects, and also requires approval from the California Coastal Commission. So it is far from being a done deal.

Having paid $9 million for the land in 2006, Evans is not about to walk away from the site of what he anticipated would be his future home.

But think of the statement he could make about sustainability if he sharply scaled back his project, eliminated the road, and really created a home that was as much in harmony with the hills as was possible.

As Bono would sing, that would be a “Beautiful Day.” And I think the man known worldwide as “the Edge” can make that happen.