U.S. OUT OF IRAQ, PART TWO — Interviews at the San Francisco Anti-War March 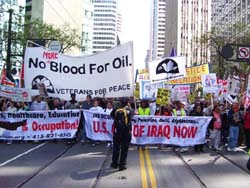 EDITOR’S NOTE: On March 18, thousands marched down Market Street to commemorate the four-year anniversary of the Iraq War and to protest the occupation. It was the largest peace march since the war began, and the mood was more upbeat. Carol Harvey conducted in-depth interviews of four protesters, and their stories. This is the second of a two-part series.

Q: Why are you are here today?

A: I’m an organizer with the “Stop Funding The War Coalition.” I am on the National staff of United for Peace and Justice. I am 26 years old, and live in New York City. I came out here to help organize (and) do outreach for our demonstration Monday, March 19, 2007 at noon at the Federal Building.

I am a Quaker. But I’m not from the American Friends Service Committee, one of our endorsing organizations for this demonstration tomorrow. They’ve been very helpful, camping out in the office for the last week or two. We appreciate their support.

Right now what we are really looking to do is end the War in Iraq.

What we can really do right now is focus on pressuring Congress to cut off funding for the War — make them aware that 77% of the American people oppose the war in Iraq, and for them to not do anything about it, or to do non-binding resolutions that don’t accomplish anything is really irresponsible. It’s not what we elected them to do. Their power is the power of the purse, so if they are not looking for ways to cut off funding, they own the war.

Q: You are expressing something that I feel too. Pelosi and the Democrats got voted in on November 7 — I worked in that election, by the way — and what have they done for us since then? They seem to be foot-dragging. Non-binding resolution? What power does that have?

A: (As far as) the non-binding resolutions that were passed by the House, we keep hearing from Pelosi’s office about how they need to push things along incrementally. As my friend, Ann Roessler from Military Families Speak Out said yesterday at Walnut Creek, “Boys and Girls are not dying incrementally.” We need a solution to this conflict now.

She could be bringing along a lot of the Bills, like HR 508 which is the bill sponsored by Barbara Lee and a number of others, I believe.

A: The Bill ends the War in Iraq. It provides a really clear strategy for bringing the troops home in a safe way.

It provides funding for bringing them home. It provides care for them when they get home.

There are a lot of bills that could be brought out that actually have teeth. What we need is something with teeth that will actually bring about an end to the war now.

Q: Are you worried that Bush will attack Iran before he leaves office?

A: Yes, I am worried. There have been a number of provisions that we’ve been trying to get through to put restrictions that say, “No Funding The War on Iran,” — that the escalation cannot be used to attack Iran. There are a lot of people who are concerned (about) the military tankers in the Gulf and (that) the escalation (may actually be) an escalation of the positioning of troops to attack Iran. Certainly the rhetoric we are hearing about Iran is strangely similar to what we were hearing about Iraq in 2002.

The writing seems to be on the wall that Iran is on the table. Certainly, Obama and Clinton are saying that it is on the table as part of their political campaigning — which is just ridiculous.

Q: The only person who appears to have come out against attacking Iran is Al Gore.

A: I believe that is true. It’s stunning.

So, yes. This demonstration Monday is really geared towards focusing on Speaker Pelosi and saying, “You’re not representing the California 8th District now. You represent the leadership party in the House of Representatives.

“You are the most powerful elected Democrat right now, and whatever you think political party-wise, certainly there are lots of people in the ‘Stop Funding The War Coalition,’ the organization that I represent, that are not Democrats, that are not Republicans. They are Greens. They are Libertarians. They are Independents.”

But, Nancy represents all Democrats in the House, and she has to use her position to be as anti-war as she says she is.

Q: We put her in power in that election.

A: Right. San Francisco is one of the most progressive districts in the Country. (It is wrong) for her to turn her back on her constituents and vote for things that few of her constituents support…

The Democratic Council Committee, Democracy Action, which is the progressive Democrats of San Francisco, voted to endorse this demonstration, including a member of her own staff.

Within her staff there are people saying, “You know what, Nancy? You can take a stronger stand than what you are doing because we are willing to support this (anti-War “Get Out of Iraq” / “Stop Funding The War”) demonstration (on March 18 and 19, 2007).

Q: These demonstrations are about getting out of Iraq now, and she’s not saying that.

A: No. Even one of her staffers is saying, “Look Nancy. I love you. I support you, but look at our constituents. They are asking us to do more.”

Q: After the last protest on January 27, Dennis Kucinich, along with Barbara Lee and Ehren Watada’s mother, spoke at the Unitarian Church. People yelled from the audience, “Get out of Iraq now.” He was saying, “Well, this is going to take time. We’ll have to take measured steps. You’ll have to be patient.” I’m thinking, why are these extremely progressive people doing this foot-dragging?

A: Well, there is the cynical answer and then the answer that they give.

The answer they give is that the votes are not there in the Senate and the House, so they are (creating) momentum by putting forth a series of votes that slowly builds towards an exit.

The non-binding resolution the House passed a few weeks ago was geared toward getting things moving in a direction that says,” We don’t support the war. We don’t support what the President is doing.” It didn’t have any teeth, but at least they went on the record.

The next step, they say, is adding conditions to the Appropriations Bill that request benchmarks to be met. If they are not met, it immediately kicks into an exit strategy (and) we are cutting off the funds effective March 2008. And, so on and so forth.

My cynical reaction is there are interests making money from the War in Iraq. They are very much willing to make large donations to political campaigns and support the opponents of people who don’t vote their way. I believe that is a very large influence in why we are not getting out of Iraq right now.

Q: Can you boil it down to corporate-ocracy?

A: I believe that corporate interests, the military-industrial complex — it all comes together in the same picture. That’s why we’re there in the first place.

Q: Final thought: Do you think Pelosi is conditioned by corporate interests?

A: I think that it would be difficult to believe that anyone who holds elected office including Speaker Pelosi is not influenced by her desire to get re-elected. Until there is a real Campaign Finance Reform movement, I think we will continue to see more of the same.

I do think she is against the war. But she also is finding ways to continue the war.

She needs to to reconcile her personal beliefs with her political ambitions, (or) find another career. At the end of the day, “Who Are You, Really?” Is it important to you to be holding a political office or doing things that you believe in?

I personally hope that, even though she does do a lot of good things as Speaker and she has a history of finding ways to support her constituents in (many) areas, she works to support constituents in what I think is one of the critical areas —ending this completely immoral war. It is not only killing thousands of American service people and tens of thousands of Iraqis but is also going to be costing her taxpaying constituents for generations.

(One side read: “If anyone questions why we died, tell them our fathers lied to us. 32,000 + United States troops killed – Iraqi people???”)

Q: That’s a great sign. What organization are you from?

Q: Can you give me a short statement why?

A: (The words) “Treason” and “Espionage” came to me a year or two ago.

I thought about “Treason.” I looked it up in the dictionary. It said: “Betrayal of Trust.”

“Espionage.” I was thinking about it. I looked that up. it’s spying on American citizens.

“Treason,” meaning absolute betrayal — to the CIA agent, Valerie Plame, who is a government agent, and to the American people.

Q: So, you’ve been concerned about this a long time.

Q: Why does it hurt?

A: That it’s so deep. They are slaughtering people. Mass slaughtering. On the march, the only media that came to me was KPFA. ABC and (the rest) of them will not go near (a sign saying) “Prosecute.” (Bush and Cheney). Peace be with you.