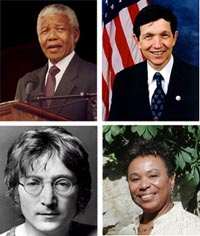 A little over 35 years ago, Beatle John Lennon compelled us to “give peace a chance” and to “imagine” a world without war. It wasn’t a new idea. Even some suits in the “establishment” believed in the idea of a world without violent conflict. Since 1945, Congressmembers had been calling for the creation of a U.S. Department of Peace, to find alternatives to violent conflict in the world. Between 1955 and 1968 alone, 85 bills had been introduced in the House and Senate calling for such an entity.

In the violent times in which we live, it may seem an anachronism to continue advocating for a Department of Peace, but that’s just what the Peace Alliance does. The project was originally launched in D.C. in 2003. Its friends in the U.S. Congress, Barbara Lee and Dennis Kucinich among them, have been pushing legislation to establish such a department. A new bill is expected to be introduced into the 110th Congress on February 5. Unfortunately, it has little chance of passing.

Meanwhile, anti-apartheid activist Nelson Mandela and a host of world leaders have been urging countries to adopt the Gandhian model of nonviolent struggle. “His philosophy contributed in no small measure to bringing about a peaceful transformation in South Africa and in healing the destructive human divisions that had been spawned by the abhorrent practice of apartheid,” former South African President Mandela said at a conference in New Delhi that marked the anniversary of the beginning of Mahatma Gandhi’s successful nonviolent movement against 300 years of British colonial rule.

It’s encouraging to hear that the idea of “satyagraha” or nonviolent struggle is alive and well. Even though the mainstream press is not touting Mandela’s call (I found it at Truthout.org), it’s encouraging that a leader of his stature is still a believer in not fighting fire with fire. It’s easy to dismiss Gandhi’s work as simply the product of one particular place and moment in time. It would never work today, I can hear the critics say.

Nonviolent struggle goes on all the time. Not only in efforts such as Martin Luther King’s, but also in the everyday work of activists everywhere. In the late 90s, when progressives here in San Francisco wanted to change a Board of Supervisors that was anti-tenant and pro-development, we didn’t go after City Hall with weapons of mass destruction. We organized. We went out on the streets, talked to people and educated them on the issues. When the election came around, we found candidates to run. The new Board that took office in 2000 was nothing like what had preceded it. Even the mainstream press called it a radical change. Not one single drop of blood was shed.

Granted, making this work on an international level is a huge challenge. Human differences (religion, political philosophy, etc.) have always pitted us against each other. When push comes to shove, we usually defend our beliefs with the sword. That’s exactly why we need a Department of Peace. To promote nonviolence as a tool for settling differences. To put into everyday practice the principles of great leaders such as King, Gandhi and Mandela. To teach the world that our differences need not end up in streets filled
with corpses.

Tommi Avicolli Mecca is a radical, southern Italian, working-class queer performer, activist and writer whose work can be seen at www.avicollimecca.com.