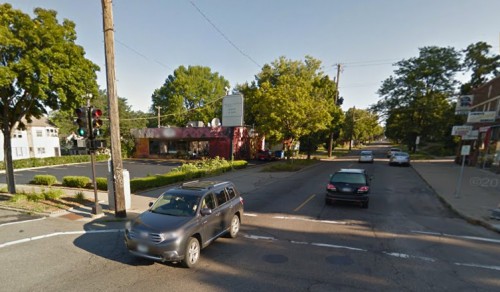 So far, there aren’t a lot of obvious benefits to spending years of your life getting a PhD in geography and bicycle planning. You acquire a lot of debt, spend a lot of time alone in rooms reading and writing things that few people will ever care about, and generally end up thinking to yourself, “Why am I doing this?” The only living creature that notices your gradual aging and obsolescence is your cat.

That said, you do learn stuff and acquire credentials. And probably the best thing about having a PhD in bicycling and geography is that brief moment in time when someone says something about your slim area of expertise and you’re able to weigh in by making clear, concise statements backed up with data, research, and carefully chosen anecdotes. (Actually, you end up waiting months or years for these moments to come along, so when they finally do, you end up getting a bit too excited.)

Anyway, it happened just the other day when I again noticed flagrantly incorrect claims about the relationship between bike lanes, street design, and safety.

Saint Paul has seen more progress on bicycle planning in one summer than we’ve had in decades, combined, as the city has passed a relatively ambitious bike plan which includes potentially revolutionary routes along the “Grand Rounds” and connecting through downtown, and the county and city have striped bike lanes on Lexington, Front, Marshall, Oakdale, and Western avenues.

Pretty much the only sticking point was Cleveland Avenue, where a city-supported bike lane proposal ran into some neighborhood opposition because it involved losing or moving on-street parking spaces from Cleveland to nearby side streets.

The short version: the City-proposed bike lanes are one of the first examples of implementing the new city-wide bike plan, and a few business people got upset and organized  a campaign to complain to the City Council, City, and County staff. In response, the City Council proposed a one-year delay during which a broadly selected committee would work out a fair solution, and that’s where we are today. The committee (of which I’m a member) is hosting a public open house this Wednesday. That’s all politics. But the problem is that, during the debates, a few people have been spreading misinformation about street safety in an attempt to derail any bicycle infrastructure from being built.

Here’s the latest salvo, which was delivered to neighbors along Cleveland:

To me, this is like when climate skeptics try to use data to convince skeptics that the planet isn’t actually warming. And as Upton Sinclair once said, “it is difficult to get a man to understand something when his salary depends on him not understanding it.” If you believe that your career depends on a parking space, there’s no amount of research, argument, or kindness that will convince you that a bike lane might benefit Cleveland Avenue.

And to make a long story short, this flier represents a dishonest argument about street design that appeals to those invested in the status quo. On the surface, these objections might seem reasonable. But they actually reflect how inflexibility about street design and urban transportation, in order to cling to slight comforts, keeps a dangerous precedent in place for another decade.

Allow me to explain.

The problem with this line of thinking is that 11’, and even 10’ lanes, are statistically proven to be safer than 12’ lanes in cities.This is what  I call the “paradox of risk.” The more we design a street to be “safer” with wide lanes and fewer obstacles, according to traditional engineering principles of “forgiveness“, the more dangerous it actually becomes. This is why some of the seemingly most dangerous streets (think of narrow routes in Europe, downtown locations with tons of pedestrians, or intersections with few traffic controls) are statistically some of the safest, while seemingly safe streets (think of the typical strip-mall 4-lane street, or an arrow-straight two-lane highway on the prairie) are actually the most dangerous. It’s a vicious cycle: the less we “think” a street is dangerous, the less we pay attention, the more dangerous it becomes. And vice versa.

This principle comes into play on the Cleveland Avenue example, which calls for the reduction of the traffic lane width from 12’ to 11’ to accommodate bicycling. The second big problem with the anti-bike narratives is that they often use the “perfect is the enemy of the good” routine, by saying “if we can’t do something amazing, then we shouldn’t do anything at all.”

One difficult concept in bicycle planning, especially for folks who don’t ride themselves very often, is that there are different kinds of riders. Often this gets broken down into “recreational” vs. “commuting” bicyclists, but the reality is a lot more complicated than that, with many trips falling in between those two categories, and many trips blurring the line. (Think of, for example, a couple who ride their bicycles to Lake Como to have dinner and a drink by the water, before returning home. Is that a “recreational” or a “utility” trip? The answer is “both.”)

And, just as car drivers aren’t all commuting to work, bicycle riders have all kinds of different motivations for being out on the street. What’s more, they also have contrasting comfort zones when it comes to where they’d like to ride, how much fast-moving car traffic they’re willing to tolerate, and what kind of bicycle they’re riding on. At root, it’s often a tension between speed and comfort, with some people opting  to ride more slowly on back streets and others wanting to go faster even if it means putting up with traffic.

That means that smart cities build infrastructure for the whole range of bicyclists and allow them to choose where and how quickly they want to ride. In the end, it turns into a spectrum of bicycle infrastructure. Any given rider might choose to ride on side-paths for most of their ride, but will inevitably end up merging onto more arterial main streets for some of the ride, where those narrower bike lanes will come in very handy.

A good example is the River Road, where there’s an off-street mixed-use path for bicyclists who want to go slowly and avoid cars, and (at least in one direction) an on-street bike lane for people riding 15+ miles per hour who don’t mind a bit of car traffic. Having either one without the other would be bad planning.

That’s why good city bike plans offer an array of different types of infrastructure, to accommodate as many people as possible. Sometimes you can do this all in one go, with infrastructure designed for many different kinds of users. (The Midtown Greenway is the gold standard for this, but protected bike lane designs like Park and Portland Avenues in Minneapolis also do pretty well.) The Saint Paul bike plan is designed to have off-street protected bikeways (Grand Rounds, downtown, maybe others in the future) for many kinds of users, on-street lanes for more utilitarian trips to directly reach shops, and low-traffic bicycle boulevards for unhurried people wanting a low-stress experience. All of these kinds of bike infrastructure work together and amplify each other.

(After all, even an “off-street commute” trip begins and ends with an encounter in a more congested area; see the example of one of the rides from my dissertation research above.)

I’m OK with people having different opinions about bicycling, parking, and street design. But I hate seeing misinformation dominate the discussions. Twelve-foot lanes are more dangerous than narrower designs, 5’ bike lanes are safe for many people and many kinds of trips, and anyone who says otherwise should do their homework and stop misleading the public.

This piece originally appeared in streets.mn